What Happens When the “Port Aransas Sandcastle Guy” Can’t Go to the Beach?

With limited access to his greatest resource, sand sculptor Mark Landrum faces quite the dilemma 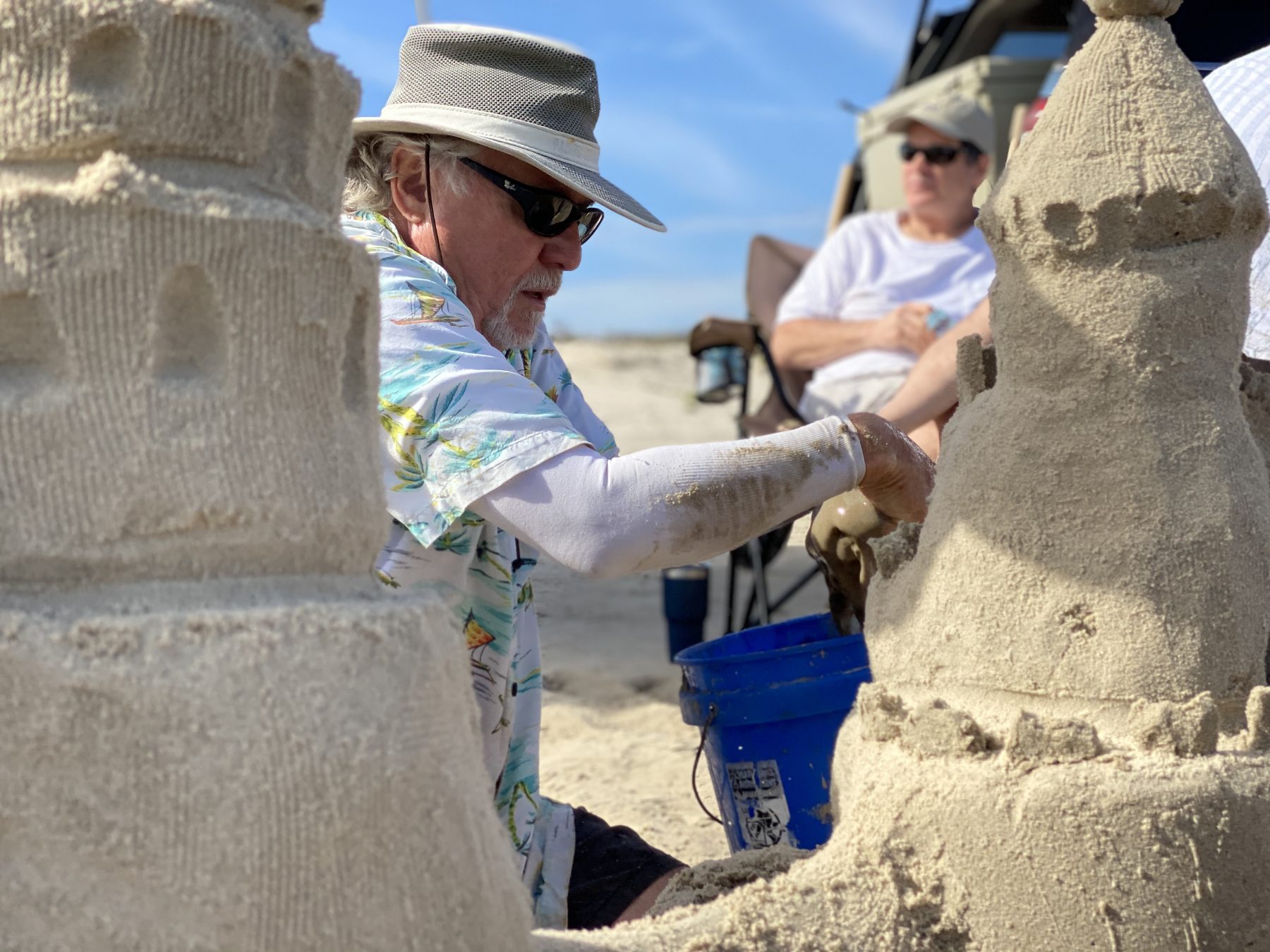 Mark Landrum sculpts a structure made out of sand. Photo by Paul Brown.

For the past 13 years, Mark Landrum has been known as the “Port Aransas Sandcastle Guy.” The sand artist teaches lessons on how to build sandcastles, but is also commissioned to create custom works for marriage proposals, businesses openings, family greeting cards, and more.

Since the COVID-19 pandemic, Landrum has had to face the ultimate challenge to his way of life: How do you work with sand when you have limited access to the beach?

“March and April, the beaches were closed, and I lost all of my income for two months, as many people did,” he says.

When the governor allowed businesses to start reopening in May, Landrum saw an uptick in requests for sandcastle lessons. A recent sharp rise in COVID-19 cases in Nueces County prompted local officials to halt all vehicle traffic on the beach. An overnight curfew has also been imposed through at least the end of July in hopes of discouraging visitors and the spread of the virus.

Because vehicle traffic is not allowed on the beach, Landrum has to use a wheelbarrow for all of his equipment for the few lessons that are still scheduled. “My appointments must be adjusted for the time it takes to get the equipment on and off the beach,” he says. “The customer must also have some way to get to the beach from their location. Some people just cancel the appointment.”

Despite the recent rough road for Landrum and his business, there’s still joy embedded in the mere act of working with sand. “I’ve never had a cranky or grumpy person on the beach,” he says with a grin. 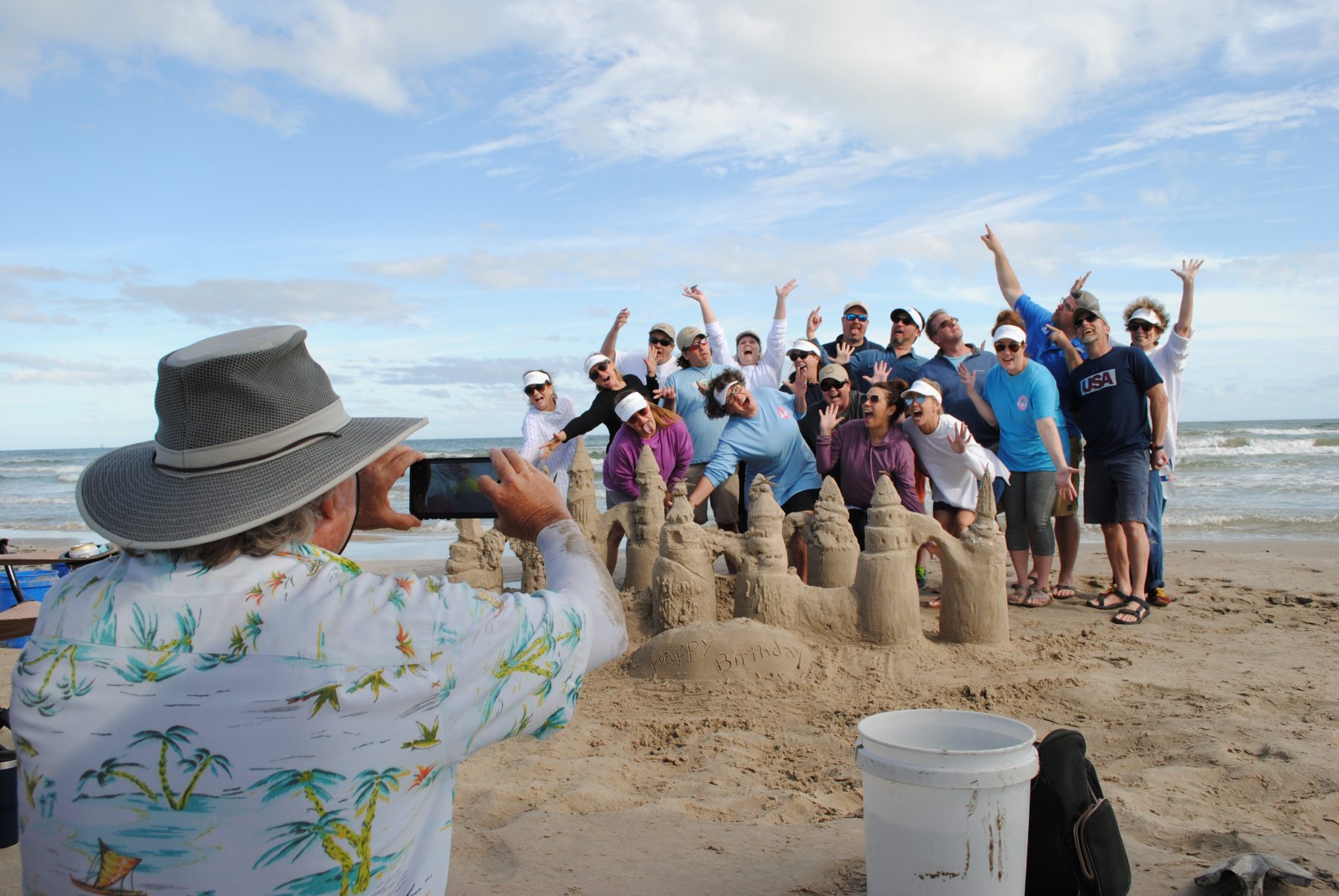 Landrum takes a celebratory photo after one of his sandcastle-building classes. Photo by Paul Brown.

Landrum, who previously worked on information systems for convenience stores, took his first sandcastle lesson in 1999 from South Padre Island’s Lucinda “Sandy Feet” Wierenga, who has participated in international competitions since 1987 and even authored a book on sandcastle building.

“I realized it’s like woodcarving,” recalls Landrum, who did a lot of whittling as a Boy Scout. “I started pulling out all my woodcarving books and I went on the beach, made a big block of sand, and carved something out of it. I was just hooked.”

Around 2001, he started traveling with the group Sand in the City, an organization that raises money for youth-related nonprofits through sandcastle-building contests. “I got to love the people and love going around and building castles with them.”

Landrum quickly built a reputation in the sand-sculpting community, and a colleague in South Padre, Amazin’ Walter McDonald, told him someone needed to provide lessons on a regular basis around Port Aransas. Landrum decided to fill that void on weekends and holidays, and before he knew it, he was making a living off his passion.

But without the local beach and access to plentiful sand, Landrum is unsure of his next steps. “I am not certain my business will survive,” he says. “I also look at other places in town that are struggling and on the brink of closure, and it is very heartbreaking. Life has its ups and downs and we as a people meet these challenges with perseverance and life goes on.”

Unfortunately, Texas SandFest, the largest native-sand sculpture competition in the country, held in Port Aransas, was canceled for 2020. Landrum, who serves on the SandFest board, says canceling was a tough call because the event not only benefits sand sculptors, but also greatly contributes to the local economy, vendors, and musicians.

“It would have been an impossibility,” he says. “The sculptors come from all over, and the uncertainty of transportation means lots of them would not be able to attend.” The 2021 dates have been set for April 23-25.

Luckily, the ephemeral nature of his art form has given Landrum a mantra that provides a bit of hope.

“You know, come back another day and build another one. Make some more people happy on the beach.”