First detected on the East Coast, the fungal disease primarily infects hibernating bats—not the migratory free-tailed bats that are famous for their nightly flights 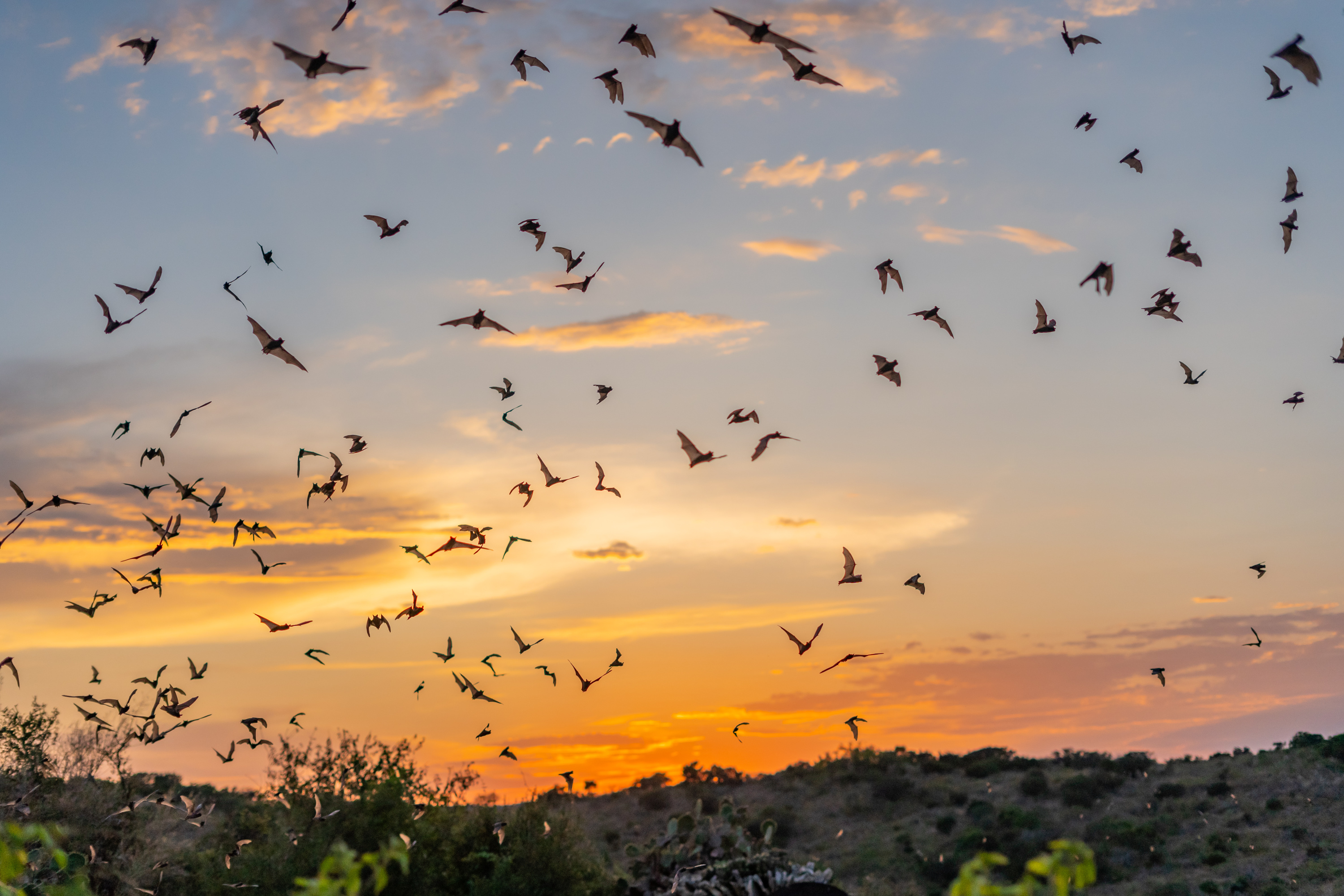 Bats emerge from Frio Cave near Concan. Photo by Will van Overbeek

A highlight of summer in Texas is the arrival of millions of Mexican free-tailed bats. The natural spectacle of their nightly emergence from roosting spots in caverns and under bridges draws crowds throughout the state. But just ahead of this summer tradition, the Texas Parks and Wildlife Department announced this week that it has found a disease called white-nose syndrome in a Texas cave myotis bat.

First discovered in New York in 2007, white-nose syndrome, or WNS, spreads rapidly and has killed millions of hibernating bats in the eastern United States. Scientists detected the fungus that causes the disease in Texas in 2017. In 2019, they found high levels of the fungus on bats at several Central Texas locations. But it wasn’t until Feb. 23 that an infected bat—one found dead in Gillespie County—became the first confirmed case of white-nose syndrome in Texas.

While the discovery is a pressing concern, Parks and Wildlife bat specialist Nathan Fuller notes the species of Mexican free-tailed bats that are famous for their nightly flights are less susceptible to the disease. Beginning around May, vast colonies of these migratory bats emerge at dusk for insect-hunting forays from places like Austin’s Congress Avenue Bridge, Stuart Cave at Kickapoo Cavern State Park, Bracken Cave near San Antonio, and Frio Bat Cave near Concan.

“Bat viewing season this spring and summer should go on as expected,” Fuller says. However: “WNS is a big concern whether it affects the summer viewing season or not, because of how bats fit into the ecosystem.”

We spoke with Fuller to learn more about white-nose syndrome in Texas.

TH: What is the significance of finding the disease in Texas?

Fuller: It’s important to know that the pathogen that causes WNS has been in the state for some years, but only with this test have we found the disease. That is definitely concerning. The disease thrives in cold conditions, and we thought it wouldn’t be much of a problem here where we have warmer and shorter winters. We hope it won’t be as severe as in other areas. When the fungus grows on the skin of hibernating bats, it repeatedly rouses them, causing them to consume their winter fat stores and starve to death before spring.

TH: What can be done about WNS?

Fuller: There are a lot of people working on dealing with it, from treating the fungus to feeding bats and cleaning roosts after bats have left so they won’t get re-infected the next year. People are working on a vaccine as well. TPWD funded a study to look at the effect of some of these ideas. But all are early in development, so we aren’t sure whether any of them will work.

At the moment the best we can do is monitor the effects of the disease, determine if is having the same effect we see in the East, and document potential decline of populations.

TH: How does this affect the sites where people watch bat emergences?

Fuller: An important thing to note is that the infected bat was a cave myotis (Myotis velifer). The only bats that we are seeing issues with right now are that species and the tricolored bat (Perimyotis subflavus). The locations where people go to see bat emergences, those are the Mexican free-tailed bat (Tadarida brasiliensis). They leave Texas during winter and fly south, rather than hibernating here.

Free-tailed bats can be infected with the fungus, but we are optimistic they won’t be affected by the disease.

We would hope, though, that people will talk about WNS at viewing events. The cave myotis and tricolored bats are important species in our ecosystems. They eat insects as do the free-tailed bats, although the different species forage in different areas.

A locator map of 2019 fungus detections in Texas is available at this TPWD webpage.

TH: Does the fungus pose a risk to people?

Fuller: No, absolutely not. It does not affect people in any way. We don’t hibernate, we don’t drop our body temperature to 50 degrees and stay in one place for four months. The fungus needs an animal in a cave that is cold and does not move for a long time. It is almost exclusively transmitted from bat to bat.

That said, the public should never handle bats or other wild animals. If you see a dead or sick bat, do not touch or handle it. Please report it to TPWD at nathan.fuller@tpwd.texas.gov.