With 'The French Dispatch,' the Texas filmmaker once again makes a film that resonates with Austin 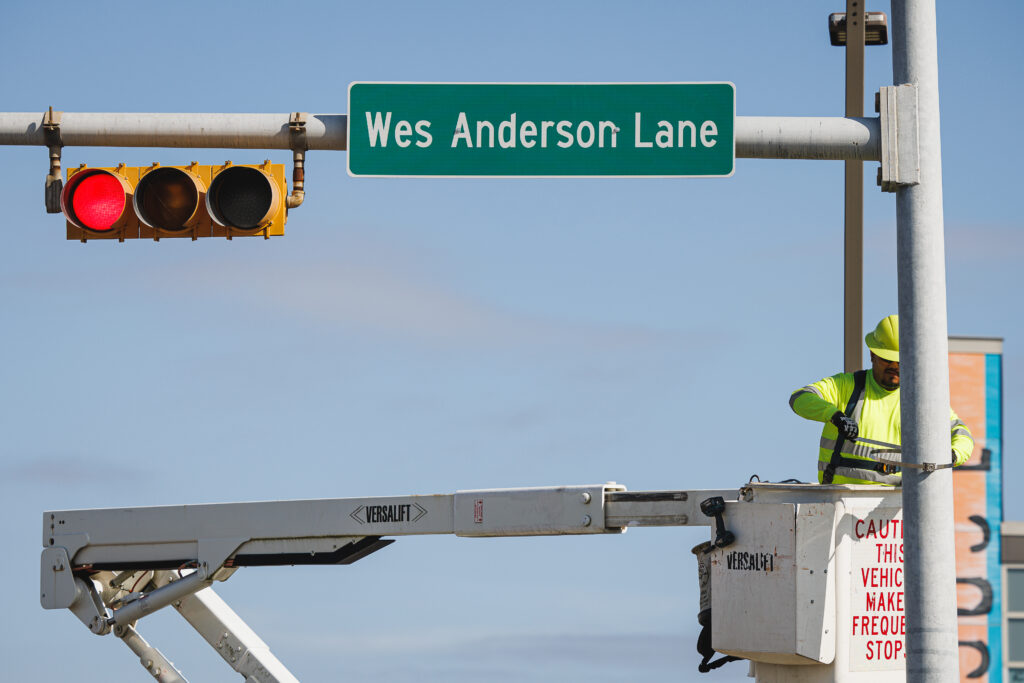 Beginning in 1996 with his debut film Bottle Rocket, it was clear Houston native Wes Anderson had tapped into something transcendent and special. Do we dare call it the “zeitgeist”? If so, we risk sounding like a precocious teen (see Rushmore) in a Wes Anderson movie, or perhaps even a pre-teen (see Moonrise Kingdom).

Of course, so much of the brilliance of Anderson’s films comes from the dysfunctional—and often hilarious—marriage of sarcasm to earnestness, cliche to nuance, and subtlety to ostentation. Anderson seizes on a new extraction of irony, one that’s hard to characterize and retains that “I know it when I see it” quality.

And it is with a hint of playful irony that Alamo Drafthouse, with support from the City of Austin, has paid tribute to the homegrown auteur and Texas Longhorn by changing West Anderson Lane in North Austin to “Wes Anderson Lane” during the month of November, coinciding with the release of Anderson’s new film, The French Dispatch. (Sure, it’s a publicity stunt, but a clever one at that.)

The official proclamation, written in a gaudy, archaic calligraphy and signed by Austin Mayor Steve Adler, is also reminiscent of a prop from one of Anderson’s films and reads, in part: “Be it known that…Whereas, It has been noted that Wes Anderson’s name, which so often graces the screen at Alamo Drafthouse Village, is exactly eleven of twelve characters as seen in the street name ‘Wes Anderson…’” It’s a perfect wink to the kind of sophisticated absurdity illustrated by Anderson’s films, and reinforces the notion that Austin, like Anderson, doesn’t take itself too seriously. 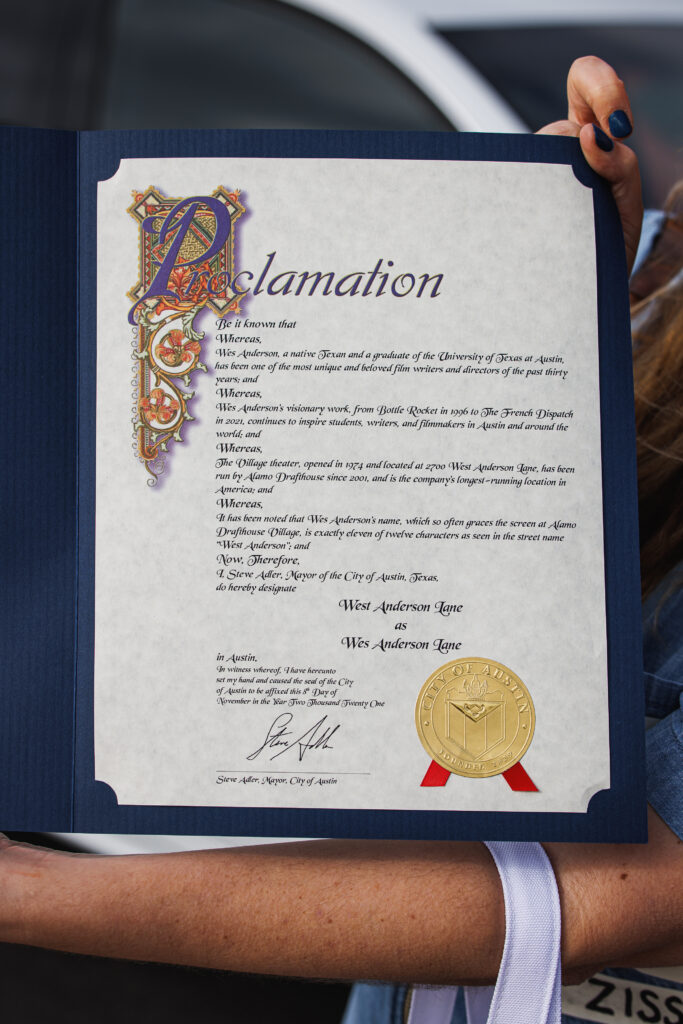 Alamo Drafthouse founder and Executive Chairman Tim League is equally game to praise a native son with the kind of Andersonian bombast we’ve come to appreciate (see The Royal Tenenbaums). “Honoring the mighty who have been forged in and by Austin has always been an important role of our city’s leader,” League said in the press release announcing the proclamation. “We are proud that Mayor Steve Adler has bestowed this incredible honor on Wes Anderson, a true titan of cinema. The accolade is well deserved.” It’s that wonderfully subtle “forged” that tips us off.

With his 10th feature film, The French Dispatch, now in theaters, Anderson has shown that while his style is unmistakably familiar in tone (the bright yet muted color palettes, the whip pans, the tracking shots, the jaunty soundtracks, et al.), what makes his such an enduring, transcendent catalogue is the wholly unique iteration of human qualities and personalities on display. In fact, Austin is in many ways an ideal analogue to the Anderson oeuvre. Just take one look around Bat City and you’ll find a primer of Wes Anderson characters: from misguided though idealistic hipsters and egomaniacal tech titans to street corner poets, pretentious university scholars, and salt-of-the-earth working folk. So it comes as little surprise to see Adler and the Alamo Drafthouse come together for this initiative.

Founded in the capital city in 1997, Alamo Drafthouse is a true Texas original and has been touted by Entertainment Weekly as “the best theater in America” and “the best theater in the world” by Wired. Alamo remains a quintessential venue for serious cinephiles and the movie-going masses alike, and with The French Dispatch already a bona fide hit (over its opening weekend, the film registered the highest per-screen average of any movie released during the pandemic), the rechristening of West Anderson Lane to Wes Anderson Lane is a fitting tribute to another Texas original.