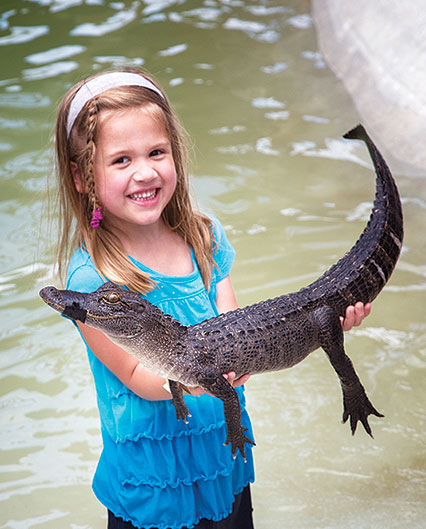 Big Al looks as though he might be dozing at the edge of his murky pond. Closer inspection reveals, however, that the 1,000-pound alligator keeps a wary eye open just a slit, scrutinizing a group of visitors hovering behind a chain-link fence.

Big Al didn’t get to be 80 years old by ignoring his surroundings.

Believed to be the largest alligator in captivity in Texas, the 13-foot, 4-inch Al resides in his own pond at Gator Country, an alligator rescue habitat and tourist attraction about 15 miles southwest of downtown Beaumont.

Al was among about a thousand alligators abandoned when another attraction located at this site closed in 1998. In 2005, Gary Saurage, a gator hunter-turned-conservationist, took over the property and found Al and one other gator still hanging around. Apparently, the others had escaped back to the bayous.

Gator Country provides a home for rescued alligators and educates the public about the reptiles.

Visitors to Gator Country can see nearly 400 alligators living in and around nine fenced ponds across
the 15-acre facility.

Saurage, who grew up in Louisiana bayou country, spruced up the old-timers’ home and started adding residents by rounding up what the Texas Parks & Wildlife Department calls “nuisance alligators”—those that show up where they’re not wanted. Visitors to Gator Country can now see nearly 400 alligators living in and around nine fenced ponds across the 15-acre facility.

“We just love the animals,” Saurage says. “This is the last remaining dinosaur. It’s great for me, being able to go and pick up these alligators that are in people’s yards and pools. Instead of killing that animal and making boots and belts out of him, we give him a place to live.”

Most of the resident reptiles hail from bayou-laced Southeast Texas, but Saurage has captured others as far away as Odessa. They blanket the grounds, some gliding through ponds with only their snouts exposed, others standing still on grassy banks, often with mouths open in the appearance of a grin. In fact, the gators stand so motionless that visitors suspect some might be stuffed.

“People say, ‘Are those real gators?’” Saurage says. “Yes, they are real.”

Gator Country keeps the alligators in ponds based on their size. There’s a biological rule among the inhabitants. “If another gator is two feet shorter than you, you can eat that gator,” explains Tyler Lacina, a wildlife biology student who interned at Gator Country last spring.

Lacina points out an eight-foot gator that recently graduated to an area with bigger pond-mates. Not quite measuring up to the length of his comrades, the new gator seems aware of this law of the pond, spending most of his time submerged underwater. (Alligators can stay underwater for a little more than two hours.)

Showing off the other ponds full of gators, Lacina tells us these reptiles can run 22 miles per hour on land and can swim at 13 mph.

“They’re very quick, very agile, and they can turn on a dime,” he says. Gator Country’s inhabitants dine on feral hogs, beef, and chicken; donors provide most of the meat. The park buys about 30,000 pounds of dry dog food a year to sell to visitors as gator feed ($2 for a few cups of feed).

Gator Country is also home to other rescued reptiles. In addition to the gators, we find a pen of hefty African sulcata tortoises—they weigh between 35 and 100 pounds—lumbering slowly around in the sun, looking like boulders on the move. And inside the gift shop sit cages filled with snakes, including a fat Burmese Python whose former owner let it get so obese that the Gator Country staff put it on a diet, presenting its meal of dead rats every three weeks instead of every two weeks.

Gator Country urges visitors to interact with the alligators—safely. In addition to watching the creatures, you can take photos with alligators, hold baby alligators and snakes, sit astride a gator (gently), and, weather permitting, swim with a gator that’s about four feet long and has its mouth taped shut. The swimming takes place in a small, cement-floored pool. You’re not expected to wade into a muddy pond with the reptile, like something out of the Swamp People reality TV show.

When you touch one, you’ll find alligators have very soft bellies, although the ridges on their backs are hard. There’s nothing slimy about them. What can be slimy is the mud that follows rains in Beaumont. Unpaved Gator Country can get pretty muddy, so choose footwear accordingly.

Gator Country’s staff members carry an infectious love for gators that easily rubs off onto visitors. “I really like alligators,” Lacina says. “They’re very protective of their babies.” In guarding their nests in the wild, he says, mother gators don’t move or eat for 60 days. Alligators can breed throughout their full life span, typically 30 to 50 years in the wild. In captivity, Lacina adds, alligators can live to the age of 100.