The Fort Worth Water Gardens 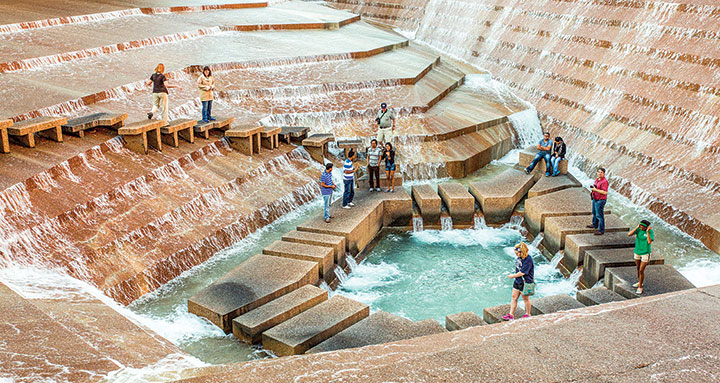 It’s the sound that captures most people’s attention: the roar of 10,500 gallons of water per minute hurtling down the four-story sides that surround the Active Water Pool at the Fort Worth Water Gardens.

And then there’s the spectacle of the water cascading down the concrete terraces and splashing past the steps that lead visitors down to a pentagon of large blocks at the bottom of the sunken waterfall. Here, in the center of it all, the cacophony of the falls muffles conversation, leaving visitors to stop for a moment to soak in the scene and snap a few pictures.

The Active Water Pool is the centerpiece of the 4.3-acre Water Gardens, an open-air complex of waterfalls, pools, fountains, plazas, walkways, and trees located adjacent to the Fort Worth Convention Center. Famed architects Philip Johnson and John Burgee designed the Water Gardens, which have provided a meditative haven in the heart of Fort Worth since their opening in 1974. While not open to swimming, the Water Gardens are a popular destination for walks, picnics, and events on the plaza.

“The Fort Worth Water Gardens have been delighting visitors for four decades now,” says Richard Zavala, Fort Worth Parks and Community Services director. “This urban oasis is treasured as a safe haven for enjoying the sights and sounds of cool, clear water amidst the hustle and bustle of busy downtown streets.”

A Real Rush: About 700 feet of concealed troughs move 10,500 gallons of water per minute through the Active Water Pool, a circular waterfall 38 feet deep. The Water Gardens’ 13 pumps and 10 miles of pipe circulate 19,000 gallons of water throughout the park.

In contrast to the Active Water Pool, the nearby Quiet Pool, enclosed in 22-foot walls, soothes as much as the waterfalls’ turbulence invigorates. Sheets of water trickle down the tall walls into a moat at their base. Rows of stately bald cypress trees, each with “knees” rising out of a circular patch of unpaved earth, line the moat that marks the five margins of the Quiet Pool, adding to the sense of stability and calm. Amid the sunken scenery, the pool circulates 570 gallons of water per minute beneath its nearly still surface. In autumn, the cypress trees’ needles turn a rich orange-brown that contrasts with the blue of the still water and the sky overhead.

The water bubbles back to life at the Aerated Pool, where underlying pumps push water upward through a staggered array of 38 nozzles and out into cones of spray. More than a dozen small lights, cycling through various colors, ring the cylindrical base of each nozzle at water level. Settling at one point into a red ring, the lights generate a sense of warmth in the azure water around them.

Visitors entering the Water Gardens from the main entrance on Houston Street or from the entrance on Commerce Street encounter a similar Cascade Pool with water flowing over multi-tiered ledges. Another popular feature is “the mountain,” a dry, 20-foot concrete wall bordering the plaza that beckons visitors to climb its steep, narrow steps.

The Fort Worth Water Gardens are only part of Philip Johnson’s legacy of breathtaking architecture around Texas. Some of his other notable projects include the Amon Carter Museum in Fort Worth, the Kennedy Memorial in Dallas, and the high-rise Pennzoil Place in Houston. “Texas is my favorite country,” Johnson wrote in 1999, six years before his death in 2005. “In Texas there is more interest in carrying out the American dream than anywhere else in the United States—and this leads to wonderful things in architecture.” According to his biographer, Franz Schulze, Johnson wanted the activity of the Water Gardens to impart an element of danger to visitors. In 1993, Schulze told the Fort Worth Star-Telegram that Johnson “felt the thrill of what he called ‘pseudo-danger’ increased the visitors’ appreciation of the park.”

Unfortunately, the sense of danger became very real in 2004 when four people drowned in an accident in the Active Pool. In response, the city hired an engineering and design firm to make the site safer, including new railings, perimeter benches with lighting around the Aerated and Active Pools, and a shallower floor for the Active Pool.

The Water Gardens’ visual appeal has earned it a role in two science-fiction movies: a 1979 PBS production based on Ursula Le Guin’s The Lathe of Heaven, and the 1976 film Logan’s Run, which starred Michael York as Logan and Corpus Christi-born Farrah Fawcett in the minor role of Holly. Near the end of Logan’s Run, Academy Award-winning visual effects transported the Active Pool to the shore of an imaginary ocean—drawing to mind the fact that hundreds of millions of years ago shallow seas covered large parts of what we now call Texas.

It’s no surprise that filmmakers have been attracted to the spectacle of the Fort Worth Water Gardens. This world-renowned piece of architecture inspires a range of emotions and responses, from creative passion to soothing contemplation—all within an easy stroll of downtown Fort Worth.