The Texas landscape has often served as both origin and inspiration for the creative mind. The stark, windswept plains of the Panhandle drew painter Georgia O’Keeffe west to Texas in 1912. The humid shores of Port Arthur gave us singer Janis Joplin and modern artist Robert Rauschenberg. Archer City, hometown of author and screenwriter Larry McMurtry, provided a prototype for the human landscapes that appear in many of the writer’s stories. And the late sculptor Donald Judd loved the West Texas community of Marfa so much that he made it the heart of his legacy.

The Big Bend region in particular has attracted many artists over the last 150 years. Texas regionalists, artists who created work during the first half of the 1900s, such as Xavier Gonzalez, Julius Woeltz, and Otis Dozier, traveled to the Big Bend to capture the rugged landscape on canvas. We can still see their handiwork hanging in museums around the state. Today, the region continues to draw artists with its appeal, and some of them, including those featured in this story, have decided to stay. 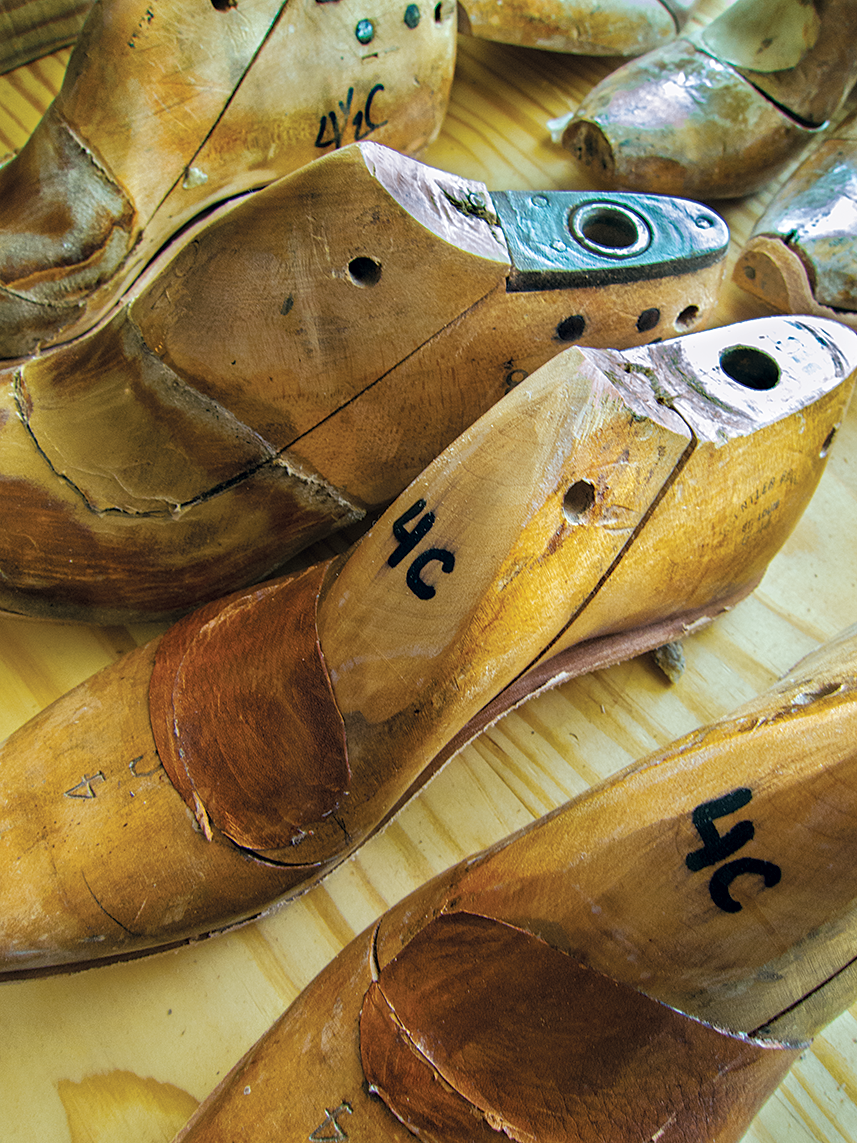 Logan Caldbeck rests her tiny frame on the edge of a cobbler’s bench in Marfa, tapping hobnails into the soles of beautifully crafted, handmade boots. Across the Cobra Rock Boot Company workshop, her partner Colt Miller prepares several pairs of their signature footwear for shipment. One pair will travel to Malibu, another to Tokyo. The original design, called the South Highland Boot, is a square-toed riding boot popular in the 1940s that Miller and Caldbeck have combined with the look of a contemporary lace-up desert boot. Constructed of oil-tanned leather with an all-leather heel and sole, the South Highland design has struck a chord with fashion and footwear aficionados globally. And every pair is made by hand in the Marfa workshop.

Miller, a native Texan raised in Borden County cattle country, began constructing custom cowboy boots under his brand name Colt Miller Boots before meeting Caldbeck, a photographer from British Columbia. Miller taught Caldbeck the boot-making craft and together they opened Cobra Rock in 2011. Since then, the South Highland Boot—priced at $495 a pair—has become the driving force behind the company’s success. “They’re rooted in cowboy history,” Caldbeck says of the unique design, “but at the same time they’re their own thing.” 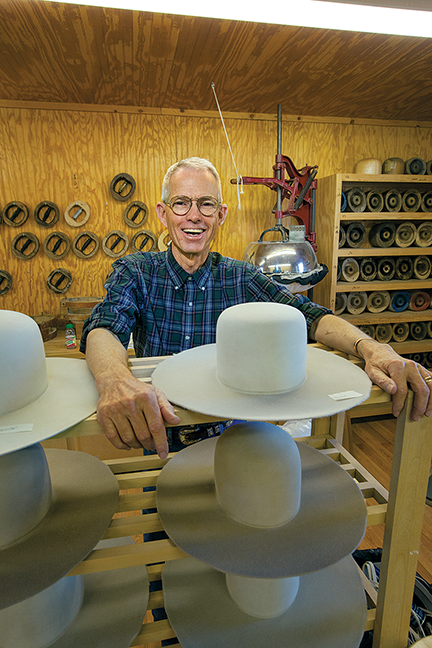 Jim Spradley with one of his beaver-felt toppers. (Photo by J. Griffis Smith)

Master hatter Jim Spradley’s cowboy hats are well-known commodities among the Big Bend ranching community, the national rodeo circuit, and hat connoisseurs. He employs a French-made Comformateur, an odd, 1850s wooden tool with moving measurement parts, to obtain precise head metrics for every customer who visits his hattery in Alpine. His selection of high-grade beaver felt also contributes to the hats’ quality and fit.

“I like a nice hat,” Spradley says. “I always have, ever since I was a kid and I remember watching those old ranchers and my Dad wearing nice hats.” Spradley crafts each hat by hand, often spending weeks to achieve the quality he desires. “I want those hats to not just look nice from a distance,” he says. “I want them to look nice when you [hold] them in your hand.” 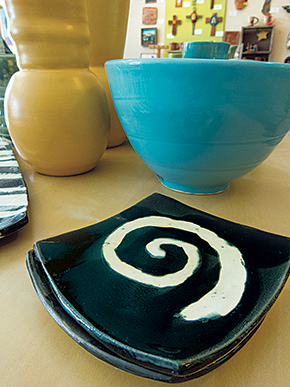 The ceramicist duo Mimi and Robert Dopson, working under the brand name “Mimi y Roberto,” incorporate earth elements into their creative process—via fired clay. The Dopsons spent 30 years in Austin building a dental business and raising a family before making the move to Alpine to pursue their artistic endeavors. After studying ceramics at Sul Ross State University, the Dopsons developed their own version of a lean, classic pottery design that now dominates their line of vases, pitchers, large bowls, and tableware. Muted colors and sleek profiles make the Dopsons’ pottery a favorite for modern interiors. The Dopsons have completed ceramic training residencies in Mashiko, Japan, and Medicine Hat, Canada, and they return each summer to a pottery school in Tuscany to study the latest in design. The Dopsons show their wares at Catchlight Gallery in Alpine and Tienda M in Marfa. 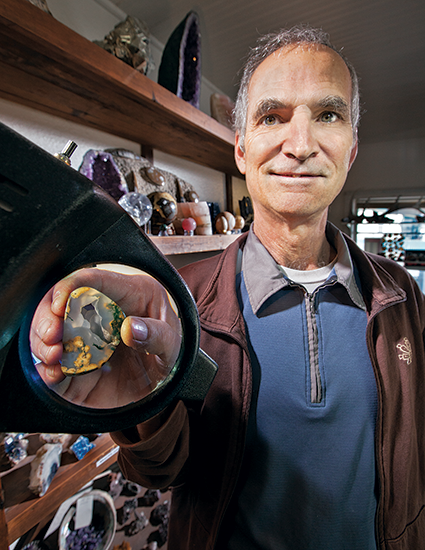 Paul Graybeal knows a lot about doing one’s own thing. The Marfa-based jeweler found a source, both aesthetically and literally, for his artistic endeavors in the landscape of the Big Bend. He started collecting raw agates on the Woodward Ranch near Alpine soon after moving to the area in 1984. Once he amassed a sizable collection of the rock, he bought a used rock saw and grinder and taught himself to cut and polish the stones.
A jewelry course at Sul Ross one summer advanced his artist’s education, and in 1989, Graybeal began creating custom silver and agate jewelry under the name Moonlight Gemstones.

The magic of Graybeal’s work lies in the beauty of the stones as much as in his ability to uncover their unique characteristics. The dark rock obscures the delicate web-like patterns until Graybeal uses his skills to conjure their best attributes to light. Moonlight Gemstones, located on the west end of Marfa, took on jeweler
Ben Toro, Graybeal’s stepson, as partner in 2005 and, together, Toro and Graybeal produce one-of-a-kind belt buckles, bolos, bracelets, earrings, rings, and pendants. 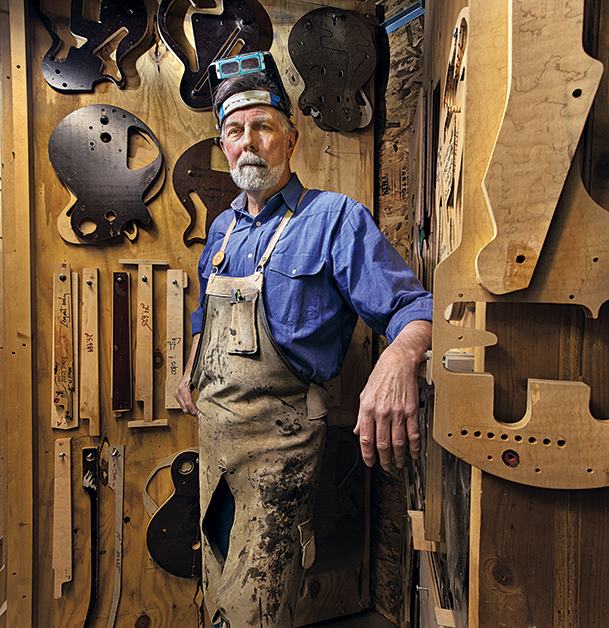 Fire plays a primary role in the art of Todd Elrod, a blacksmith who hammers out the unexpected from heated iron at his Broken Anvil Blacksmithing studio in Alpine. Forging works like beer tap handles, custom furniture, wrought-iron gates, Western spurs, and pendant jewelry for regional customers and businesses, Elrod also sells work through Alpine’s Kiowa Gallery. In a departure from “old school” blacksmithing, in which form and function drive design while flourishes are relegated to second thoughts, Elrod infuses his work with a rowdy style reminiscent of tattoos, casinos, and honky-tonks.

Elrod began his blacksmithing career at 19, and over a decade later, he’s made his ambitions a reality. “I love it when the forge roars and the iron turns red hot,” Elrod says. “With time, patience, and practice, you can shape and mold the iron to your will.”

In a barrel-vaulted metal studio hidden among the highlands south of Alpine, luthier Michael Stevens puts the finishing touches on one of his signature double-necked electric guitars. The products of his formidable talent—beautifully crafted guitars, basses, and mandolins—mirror the best attributes of good music: an engaging style and a transformative experience with a few surprises. Stevens began his career in 1967 repairing guitars for the northern California specialty shop Guitar Resurrection. Over the years, his career included a stint in Austin—where he repaired and created custom instruments for musical greats like Stevie Ray and Jimmy Vaughan, Otis Rush, Ray Benson, and George Thorogood—and the job of establishing and leading the Fender Custom Shop in California. Determined to be independent once again, Stevens opened his Alpine shop in 1990, and has since produced custom, handmade electric stringed instruments for musicians and collectors all over the world. 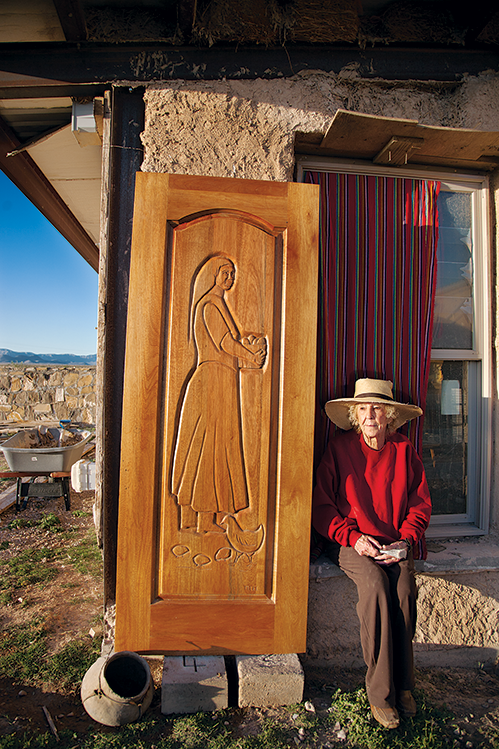 Artist Maisie Lee arrived in the Big Bend ranching community of Marathon for the first time in 1939, accompanying her brother as he made his rounds as a cattle buyer for the Peyton Packing Company. Originally from Australia, Maisie Lee and her family migrated to America in 1925, sailing to San Francisco. Her father then settled the family in El Paso.

“I came to Marathon several times, and I saw all these good-looking cowboys,” she recalls. “So I picked one out and married him.”

Maisie made a life for herself and her husband, the late Guy Lee, raising a family in the Big Bend, working on ranches, and living in homes and camps all over the region. In 1947, Guy took a job with the U.S. Department of Agriculture patrolling the river border on horseback to prevent stray livestock from crossing into the United States. He moved the family to the isolated Langford Hot Springs community along the Rio Grande—a location now called Boquillas Hot Springs within Big Bend National Park—where Maisie first tried her hand at carving wood.

Still carving more than 65 years later, Maisie Lee specializes in mahogany doors featuring sculpted reliefs of human and animal figures, sometimes embellishing the surfaces with turquoise stones, glass beads, and found artifacts like horseshoes. While most of her work is completed on commission, visitors to Marathon can see her handiwork on local church doors, including at First United Methodist Church, and occasionally on display and for sale at Eve’s Garden Bed and Breakfast.

The Big Bend region generates a special gravitation for artists, drawing the creative mind into its orbit with a synergetic attraction that inspires both imagination and conservation. Perhaps it’s the wide-open spaces, nurturing a sensibility that abandons limits and embraces experimentation. Maybe it’s the light, an original work of art in itself with inexhaustible variations of color and shadow, even after sundown. Sparsely populated and endowed with an unparalleled natural beauty, the Big Bend region offers artists an environment where inspiration and labor produce originality and invention. It’s no surprise, then, that these artisans, just a few among many, have chosen to call Big Bend their home.

“It’s been over a dozen years now since I became one of those artists who kept visiting the Big Bend until finally staying for good,” says writer and artist E. Dan Klepper. “It’s a place like no other.”