Back to the Basics

In Luckenbach, Everybody is Somebody 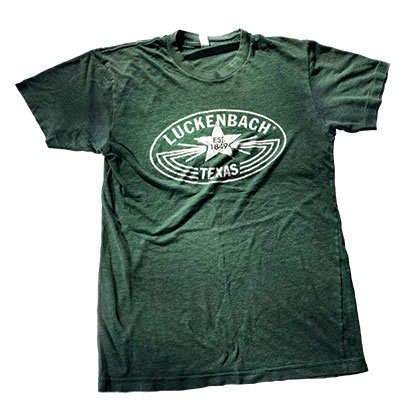 What do you do when the souvenir you want is illegal? That was the question I asked myself as I drove down a narrow, two-lane road to Luckenbach (pop. 3), about 70 miles west of Austin.

The walls are covered in photographs, vintage metal signs, and other bric-a-brac to the point where it’s nearly impossible to see beneath.

For years, I’d heard that the “Luckenbach” road sign was a trophy of sorts for fans of the sleepy town, which was immortalized in the 1977 Waylon Jennings hit “Luckenbach, Texas (Back to the Basics of Love).” Rather than get caught red-handed, I opted for a more respectable souvenir: a T-shirt with the town motto—“Everybody’s Somebody”—emblazoned on the back.

In a town this small, after all, everybody is somebody. However, on weekends, the population often swells into the thousands. It’s a popular hangout for touring motorcyclists, RV-ers, and other travelers who stop to sip a cold one at the town’s only saloon and listen to live music inside the maple-floored dance hall.

Besides the dance hall, Luckenbach’s primary draw is the general store/saloon, which occupies a 163-year-old building that once served as the post office. Nowadays, the general store carries pretty much anything you can imagine, from Luckenbach-branded baseball caps and belt buckles to sheriff badges, signs carved out of old barn wood, and distressed metal Luckenbach signs similar to the real ones that keep disappearing. The walls are covered in photographs and other bric-a-brac to the point where it’s nearly impossible to see beneath.

After a quick sweep of the store, I stepped outside, attracted by the rich aroma of barbecue from the adjacent Feed Lot restaurant, where diners order at the counter. Several travelers had staked their claim at a handful of nearby picnic tables, digging into burgers, bratwurst, and Frito pies washed down with cherry limeades.

I wandered over to a Texas Historical Commission marker outlining the town’s history. The exact date of Luckenbach’s founding is up for debate, but most historians believe that brothers Jacob and August Luckenbach, two farmers from Germany, arrived here in the mid-1800s. A post office soon followed, as well as a blacksmith shop and cotton gin. By the early 1900s, the population had grown to almost 500, but Luckenbach eventually fell into a state of decline. In 1970, the town went up for sale, and a group of locals, including folklorist John Russell “Hondo” Crouch, purchased it for $30,000. Crouch dubbed himself mayor and fueled new life into the town, presiding over zany events like the Luckenbach World’s Fair and Mud Daubers Festival. Today it’s the site of an annual chili cook-off, a blues festival, acoustic guitar-picking circles, and a Valentine’s Day ball called the Hug-in.

Thanks to Crouch’s foresight, over the last four decades Luckenbach has earned a much-deserved spot on many a Texan’s bucket list, mine included. Which is how I found myself waiting in line at the general store that summer afternoon to purchase a T-shirt.

When the couple in front of me began to grumble and fidget, the cashier chided them: “We’re not on New York time and we’re not on Los Angeles time; we’re on Luckenbach time.” In other words, city folks, be patient!

I’m proud to say that my T-shirt is still in regular rotation. I live in New York now, and I’m always surprised when strangers stop me on the street to ask about it. Many of them have been to Luckenbach too, while others have only heard about it through word of mouth, as if it were a fictitious land similar to Narnia. And when you think about it, there really is no other place like it on earth.