Bowie: Come for the Giant Knife; Stay for the Friendly Folks

While the 20-foot bowie knife is fascinating, the North Texas town has much more to offer 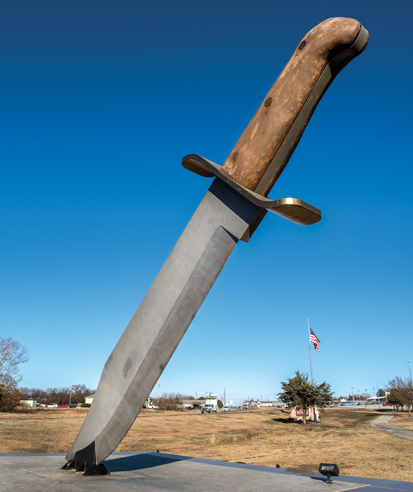 The World’s Largest Bowie Knife stands on the main road to Bowie from US 287’s high-speed bypass. Dedicated in April 2016, the knife has helped keep the quiet Montague County town from being a blur for travelers in North Texas. The hamlet even earned a Guinness World Record certificate for the replica. 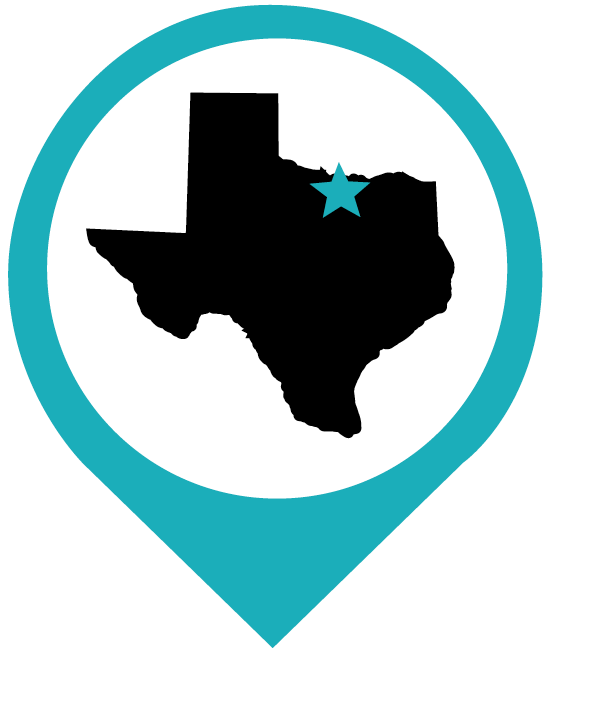 “When the Knife finally went up, they said, ‘Oh, my gosh, how did you do that?’” says Van Baize, a retired bank executive who helped spearhead the project. Some locals were skeptical about the venture, he notes, but visitors from as far away as Europe and South America have trekked to see the blade, which was constructed with private funds at the edge of a field in Pelham Park.

Alamo fighter Jim Bowie used the hunting knife as early as the 1820s as an alternative to cap-and-ball pistols that often misfired. The new Bowie Knife attraction is true to the original design, just 20 times bigger. From the handle to its legendary tip, the knife measures 20-feet, 6-inches. Counting the base that the blade penetrates, it weighs one-and-a-half tons. It also uses a real knife’s materials, with a brass hilt, steel blade (unsharpened for safety reasons), and wooden handle from a local bois d’arc tree. It can withstand 90-mph winds and 2-inch-thick coats of ice.

“There are people who travel all over the United States just to see all the ‘world records’ they can,” says Diane Thomlinson, Bowie Chamber of Commerce director. Visitors to the state and the town often post their encounters with the whopping knife on social media, and they sometimes linger to experience small-town Texas.

Visitors from as far away as Europe and South America have trekked to see the blade.

That includes Bowie’s charming downtown district, where Sweet Boy’s Diner has occupied an 1800s-era storefront on historic Mason Street since 2010. When Sweet Boy’s decided to open there, Jason Love, chef and co-owner, says, “Downtown was declining; nobody came here.” He adds, “Downtown is now flourishing,” and it is not just because of the statue. 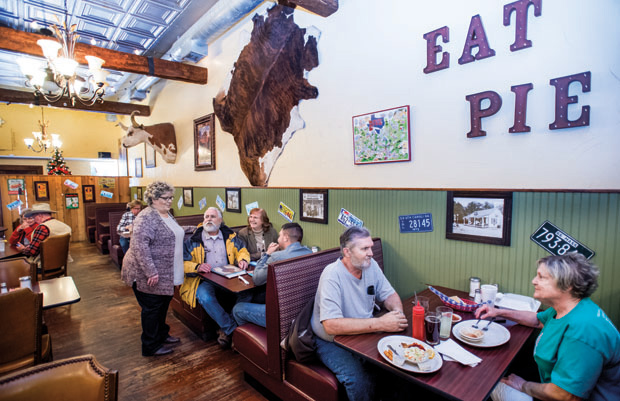 Jason, a third-generation Bowie restauranteur, serves a twist on a certain Texas café staple: His chicken-fried steak comes topped with cream gravy spiked with jalapeños and pico de gallo. On a Sunday visit, a waitress added an order of pinto beans and fried okra to sides like cooked cabbage and corn on the cob. Slices of pie, from coconut to chocolate, baked by Jason’s mother Renée Love, are free with Sunday entrées. “The only thing we don’t make here is ketchup and mayonnaise,” he says. 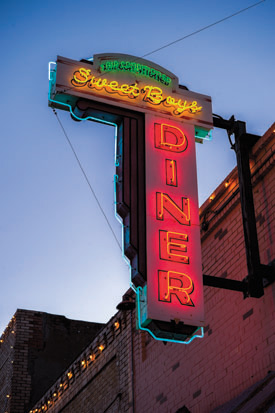 Down the street from Sweet Boy’s, Nostalgia, the popular soda fountain and antiques store owned by Larry Cox and Lanny Hunt, occupies a former drug store built in 1894. True to its heritage, the shop offers ice cream floats, daily specials like grilled pork chops, and sweets like Uncle Melvin’s Butter Sauce Cream Cake, a not-too-sweet, silky offering that Lanny recommends for first-time visitors. Two elongated rooms with enclaves for dining are stuffed with memorabilia and antiques—like an 11-stop wooden organ—collected by the owners from locations around the region. “We just hunt and peck until we find something to sell,” says Larry of acquiring Nostalgia’s inventory. “It’s kind of fun.”

Trade City’s owner, Mark Shillingburg, mentions another draw—fried pies cooked by a Mennonite community from the Hillsboro area. “People come from all around just for the pies.”

Assisting with the revitalization of downtown Bowie is relative newcomer Tawni Jones, who grew up in Sweden and completed a master’s degree in aerospace engineering from the Massachusetts Institute of Technology before founding a company specializing in VIP aircraft. She owns buildings on both sides of Mason Street and has filled it with businesses to satisfy savvy travelers as well as locals.

Why the choice of downtown Bowie for a new venture? “It’s simply because I love ‘old,’ and I love restoring ‘old,’” she says. Located in the block are: The Rack Pub & Eatery; Swanky J Wellness Center Spa & Boutique; The Brick, a coffee and sandwich shop that was once a hardware store; and the more upscale The Knife at 2 Twenty Three Steakhouse, which opened in December with a nod to Bowie’s most famous attraction. 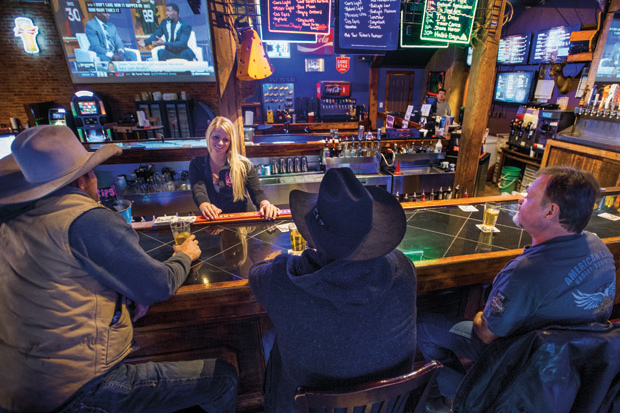 The Rack pool hall and bar

The Rack was a pool hall before Tawni purchased the building in 2014 as her first venture. She expanded food offerings (including the $8 favorite Fried-Egg Burger), added TV sports programming, booked live entertainment, and installed new pool tables—hence, “The Rack.” Its name and antlers logo also signify her passion for hunting—most of the trophies on The Rack’s walls, from mule deer to white-tailed deer to elk, belong to her. The eatery’s slaw, chips, and fries are made from scratch, and the bone-in wings are cut in-house from fresh chicken.

For an overnight lodging in Bowie that surpasses the numerous discount chains in the area, try Janet McMurray’s bed and breakfast, The Gazebo. With four guest rooms on the outskirts of downtown, the inn could double as a museum thanks to McMurray’s collection of pre-Civil War antiques. Towering shade trees frame the entrance, giving way to beautifully curated furnishings inside, including armoires, buffets, a massive dining table, secretary desks, and four-poster beds.

The Gazebo Bed and Breakfast could also function as a museum thanks to owner Janet McMurray’s collection of pre-Civil War antiques.

Through the years, Bowie’s biggest draw has been Second Monday Trade Days, which celebrates its 125th anniversary this August. The vast flea market is actually two adjacent operations: the city-owned Trade Days in Pelham Park, where the Knife stands, and privately owned Trade City. Combined, they have as many as 700 open or enclosed spaces for vendors on more than 50 acres for one three-day weekend each month. Crafts, furniture, bric-a-brac, collectibles, food, and clothing comprise the offerings, as do live animals like geese, rabbits, puppies, kittens, goats, and horses. The animals serve as a reminder of Trade Days’ 1893 origin as a gathering for exchanging horses and mules. 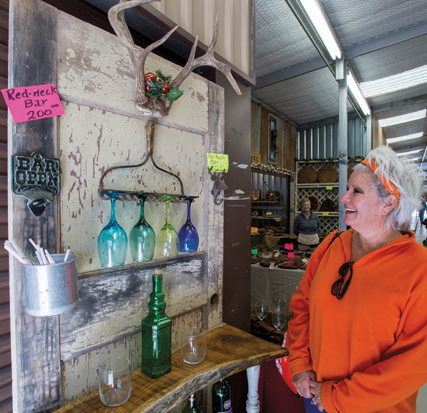 It’s a very well-attended event. “I’ve always heard it was at one time a little over 10,000,” says Bonnie Kinder, the city’s Trade Days coordinator. She also notes a 6-degree January weekend when only six vendors and “about as many customers” showed up. In her tenure, Trade Days has never closed because of the weather. “It’s crazy, but people will still come,” she says.

Working carpenters and other artisans hope customers will “buy instead of just look,” says Trade City’s owner, Mark Shillingburg, who mentions another draw—fried pies cooked by a Mennonite community from the Hillsboro area, 120 miles away. “People come from all around just for the pies,” said Shillingburg, who has owned Trade City for two decades and recommends the cherry pie.

More than one vendor offers versions of the bowie knife, though the best tale about the knife—and the town’s willingness to share—comes from Jason Love of Sweet Boy’s, who was chatting with a pair of Swedish tourists at his restaurant late one Saturday. “What is that big knife outside of town?” they asked him.
“We want one of those knives,” they said after Love explained. With no other place to turn at that hour, Jason called Diane at the chamber, which just happened to have a supply of authentic bowie knives for its annual awards program. “She sent them over here, and we gave them a knife,” he remembers. “It was like they won the lottery.”