A Souvenir at the Alamo: Crockett’s Coonskin Cap

Iconic hats at the Alamo

The Alamo. Utter those words and nearly every Texan sees in their mind an iconic image: rugged and defiant Davy Crockett wearing buckskins and a coonskin cap. Well, actually most of us envision either Fess Parker or John Wayne playing Davy Crockett, but the outfit remains essentially the same. 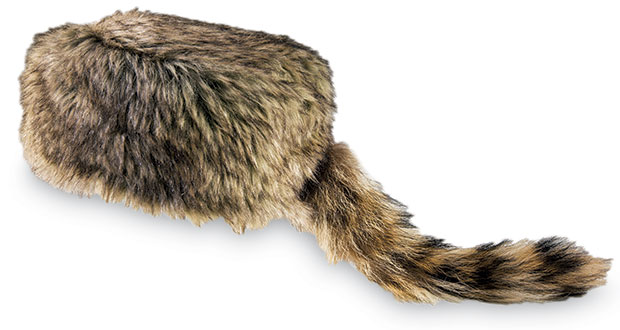 On a recent visit to San Antonio, I browsed the Alamo’s gift shop and what should I find but a rack of fur caps with striped tails, looking as if they just fell off of old Davy’s head. This brought to mind the question: Did Crockett actually wear a coonskin cap during his brief and tragic time at the Alamo?

A definitive answer is lost to history, but there’s a reasonable chance that Crockett did. Support for this assertion comes from Davy Crockett’s daughter, Matilda, who was about 14 years old when Crockett left Tennessee for Texas in October 1835. Matilda would later write of the last time she saw her father, “He was dressed in his hunting suit, wearing a coonskin cap, and carrying a fine rifle presented to him by friends in Philadelphia.” Crockett entered Texas in January 1836, and died three months later at the Alamo on March 6.

Further cap-wearing evidence comes by way of Susanna Dickinson, one of the few survivors of the Alamo siege. In an 1875 interview, Dickinson said, “I recognized Colonel Crockett lying dead and mutilated … and even remember seeing his peculiar cap lying by his side.” At the time, “peculiar” meant particular to him, or simply, Crockett’s hat, explains John Richardson, a tour guide at the Alamo who also leads in-depth Alamo battlefield analyses for groups.

The Alamo gift shop rings up some 15,000 coonskin cap purchases a year, making it the shop’s best-selling item.

The siege took place in winter when it could be cold, even in South Texas—a fact borne out by the Mexican army’s weather records, which showed temperatures ranging from the lower 60s to upper 30s. Furthermore, while Crockett didn’t wear buckskins about the halls of Congress while serving there, he likely would have donned them for traveling the frontier in winter, and it’s no stretch to assume his wardrobe included a fur cap to keep his head warm. Raccoon was a common material for winter caps in those days.

The Alamo gift shop rings up some 15,000 coonskin cap purchases a year, making it the shop’s best-selling item. Richardson says he sees a lot of youngsters and grown people walking the Alamo grounds wearing them. The day of my Alamo visit was on the cool side, but when I lined up at the entrance for my guided tour, I didn’t see any coonskin. Of course, most people visit the gift shop at the end of the tour, so my fellow tourists probably hadn’t seen them yet.

Most of the 1.5 million people who visit each year simply wander the grounds, including the church and the Long Barrack, but the Alamo’s 45-minute audio tours enhance the experience with music, sound effects, and interviews that bring the history to life. Even more enriching are the Alamo’s battlefield and VIP tours, led by history interpreters like Richardson, who possesses a wealth of trivia and knowledge.

The Alamo shrine and the historic Long Barrack sit on 4.2 verdant acres, surrounded by downtown San Antonio. The two structures are all that remain of the old fortified mission compound that occupied the site at the time of the 1836 battle. We followed Richardson through the heavy wooden doors into the hallowed Spanish missionary church, where Susanna Dickinson and other survivors huddled in the sacristy as they listened to the battle raging outside. We stood before a display listing the names of the Alamo defenders and gazed upon a rifle that Crockett had sold en route to Texas.

Across a small garden and past an enormous oak tree lies the restored Long Barrack, which served as the missionaries’ quarters and later was the last stronghold of many Texian rebels before the Alamo fell to Santa Anna’s soldiers. The exhibit inside chronicles Alamo history from 1718—when the Spanish established Mission San Antonio de Valero at this site—to 20th-Century preservation efforts. Artifacts on display include a collection of muskets and rifles, a sword presented to Santa Anna, Sam Houston’s shaving mug, and a book of literature that belonged to Colonel William B. Travis. It’s a moving experience to walk the length of the low-slung limestone building and see these bits and pieces of significant Texas history.

Exiting the Long Barrack at the end of the tour, I walked back to the gift shop. The state constructed the gift-shop building in 1937 as one of nine Texas Centennial Museums honoring the 100th anniversary of Texas independence. Buying a coonskin cap for $12.99 seemed an appropriate way to contribute. Next visit, I’ll even wear it.