The Road Most Traveled 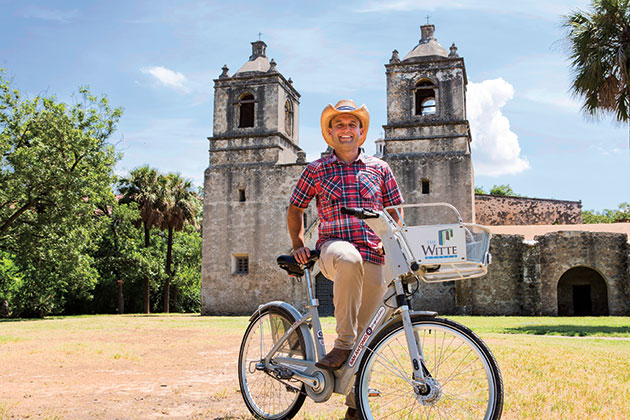 You can’t blame folks for donning coonskin caps and partaking in the tourist tradition that is San Antonio’s River Walk. However, if the Alamo and surrounding area are all you ever see of the “Alamo City,” you’re missing out. I embarked on a southbound adventure, and my view of San Antonio will never be the same.

9:00 a.m. I passed through downtown and set my compass to Southtown. This loosely defined district is undergoing an artistic revival, mixing modern style with Old-World traditions. It’s also home to some of the best food in town, which my plate of huevos rancheros and homemade tortillas from Taco Haven certainly confirmed.

10:00 a.m. I drove to a 25-block area within Southtown known as the King William Historic District. In the late 1800s, this section was settled by German merchants who established San Antonio’s most stately neighborhood. I joined a tour of Villa Finale, a museum filled with some 12,000 decorative arts pieces and antiques collected by the late Walter Nold Mathis, including Spanish Colonial paintings, a violin-playing machine, and a rare Napoleon death mask.

11:30 a.m. I headed to the Blue Star Arts Complex, where repurposed warehouses hold restaurants, shops, studios, and galleries. Mockingbird Handprints impressed with hand-dyed custom textiles, while San Angel Folk Art transported me
to el Dia de los Muertos (Day of the Dead), and I picked up my own wooden La Catrina skeleton figure. I finally made it down to Blue Star Contemporary Art Museum and wandered among the stunning local works.

1:00 p.m. I walked over to Blue Star Brewing Company and ordered a pulled-pork sandwich and a “Texican Lager” so good that it made me question whether I should spend the rest of my day drinking pints and chatting with the locals. However, my curiosity took over, and I decided to press on.

2:00 p.m. I rented a B-cycle from the bike-share kiosk and rode along the Mission Reach of the San Antonio River Walk. I instantly felt miles from the city, surrounded by tall grass, birds, and colorful art installations.

3:00 p.m. While the ride was less than two miles long, it took me back more than 250 years to the days of Franciscan friars at Mission Concepción within the San Antonio Missions National Historical Park. People may forget that the Alamo is one of five Spanish missions in San Antonio, and Mission Concepción is often considered the best-preserved of all of them.

4:30 p.m. Another short ride downriver and I stood before the magnificent Mission San José, established in 1720 and known as the “Queen of the Missions.” The reconstructed grounds gave me a full 360-degree panorama of what life was like within the mission walls. As the national park closed for the day, members of San José’s local congregation filled the church for Saturday-evening mass. More than a historic artifact, this mission is still going strong.

8:00 p.m.   Back in Southtown with plenty of time to contemplate life, I decided I should enter a convent … for dinner. So, I headed to Liberty Bar, which has turned a holy convent into a “holy moly, that’s good” restaurant. My plate of sautéed shrimp with onions tossed with a chile morita sauce and fettuccine was truly a near-religious experience.

9:30 p.m. I heard a resounding chorus of German voices and polka music emanating from a small one-story building. Next thing I knew, I was standing in the beer garden of the Beethoven Maennerchor (since 1867) with a glass of German “bier”
in hand.

The next time you ride to the top of the Tower of the Americas and appreciate the view, remember that San Antonio stretches in every direction. And no matter if you head east, west, north, or south… adventure awaits. So whether you follow my footsteps or forge your own path, I hope to see you on the road.