Written by Matt Joyce, Photographs by Michael Amador | From the January 2016 issue | Updated: January 11, 2016 | Filed Under: made in texasTRAVEL 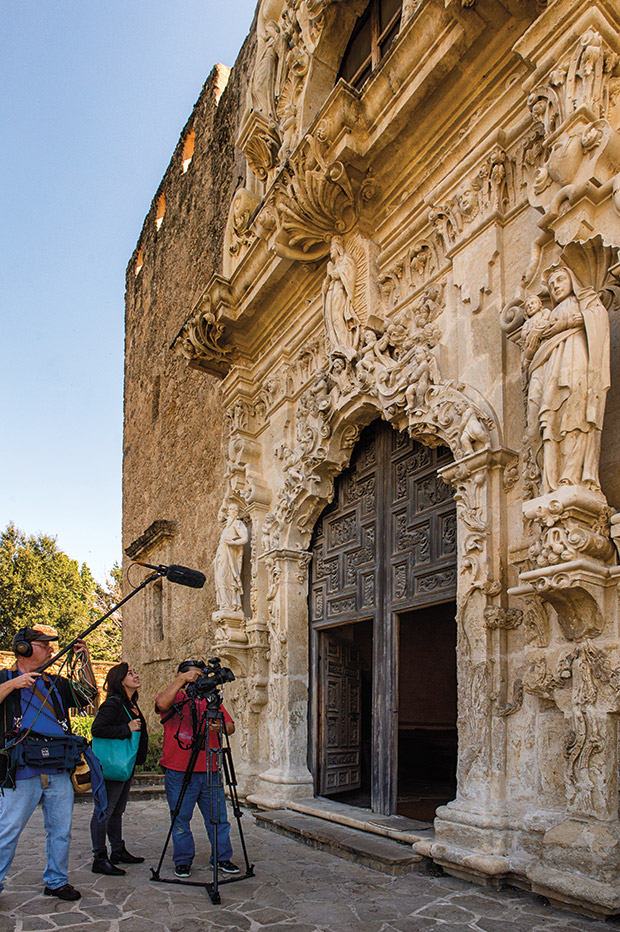 In the span of roughly one year, documentary filmmaker Lynn Boswell has hiked the Guadalupe Mountains carrying a camera tripod, rung the historic church bell at Mission Concepción, shed a tear at the moving spectacle of sea-turtle hatchlings scurrying into the surf at Padre Island, explored Big Thicket mushrooms, and boated Lake Amistad in search of prehistoric pictographs.

The National Parks of Texas: In Contact with Beauty will air on PBS stations across Texas in late April. For information on broadcast times, as well as complementary lesson plans and educational materials, visit texaspbs.org/nationalparks.

These and other far-flung adventures are all part of Boswell’s work as producer, writer, and director of The National Parks of Texas: In Contact With Beauty, a Texas PBS documentary celebrating the National Park Service’s centennial year. The documentary covers each of the 16 Park Service sites across the state. We tagged along for a November trek to the missions in San Antonio (where Boswell grew up) to learn more.

TH: How did this project come about?

Boswell: The National Parks Conservation Association and the Big Bend Conservancy approached Texas PBS about doing some kind of collaboration for the centennial. Texas PBS approached me and asked for thoughts and advice on what kind of project could be a good fit for that. My answer was, “I think you should do a documentary about all the National Park Service sites in the state, and I would love to be the one to do it.”

TH: Why were the park advocacy groups interested in making a film?

Boswell: When they knew the centennial was coming and knew that there would be all this press about it, their thought was, “We’re glad people know about the parks, but we don’t want the takeaway in Texas to be: It’s the centennial—go to California, go to Arizona, go to Wyoming, go to Maine. You need to know what’s in your backyard.” And so the mission of this project is to highlight all of these amazing parks that are here and their diversity—geographically, historically, and in terms of activities.

TH: You travel by yourself and then work with local crews. How does that work?

Boswell: There’s a cameraperson and an audio person for each shoot. We’re using crews from the PBS stations around the state as much as we can to reduce travel costs, and because they’re experts in where we are. I have traveled with crews to a few parks where local crews weren’t an option.

TH: What are you looking for from a visual perspective?

Boswell: We’re looking for pretty things, first of all, and looking for shots that take the park to people. We’re trying to represent the park visually as much as we can and to tell the story of what’s here, and also to capture it in an interesting way—less like a postcard and more helping you see things in a way that you don’t always see them.

TH: How did you come up with the title, The National Parks of Texas: In Contact With Beauty?

Boswell: The phrase “in contact with beauty” comes from a speech that Lyndon Johnson gave in 1965. He was talking about a pretty global effort for conservation. … His point was that everyone everywhere deserves to have beauty around them, and that there’s something that matters about that in people’s lives; that it’s important to preserve these places that are remote and wild, like Big Bend and the Guadalupe Mountains, but it’s equally important to preserve things that are in the middle of cities, like Chamizal in El Paso, to give people green space where they live, to make sure everyone has access to a place like that.

Boswell: [Former U.S. Senator] Kay Bailey Hutchison. We’re very excited to have her narrating it. She was such an advocate for the parks when she was in office, and she continues to offer her support to the state’s national park sites today. She also sounds like Texas in a wonderful way.

TH: How is the film organized?

Boswell: Roughly chronologically in the order that the parks came into being. The line that we’ve been using all along is, “the past, present, and future of the national park sites of Texas.” We wanted to catch most of a year in the parks. So we got Big Bend in the spring; we got Padre in the summer with the turtles and the people enjoying the beach; we went to Guadalupe Mountains in the fall to see the fall color. We really scheduled the project to capture as many seasons as we could, and to catch the very best that we could at each place.

TH: Is it possible to say what’s been your favorite park?

Boswell: No! I think my favorite park is the last park I visited, truly. I’d been to a lot of these places before, not all of them, and so it’s been really fun to see some that were on my wish list. I’ve told several people that I’ve crossed a whole lot off my bucket list, but I’ve added just as much.

TH: What is an interesting takeaway from your experience?

Boswell: Seeing all the parks in the span of a single year has given me a much deeper understanding of how diverse these places are. When you go within 24 hours from the Big Thicket to Guadalupe Mountains, it’s pretty amazing to think that all exists within the borders of a single state. Also, the amount of scientific research that goes on in the parks, that’s been really an amazing thing to see—all the scientists who use the parks for all kinds of different things that ultimately build on our shared knowledge. That’s pretty cool.

TH: What do you hope viewers take away?

Boswell: I hope that people take away an understanding that whatever you’re interested in, there’s a park where you can do that. If you’re interested in history, you can do that. You can go to a mass in a church that’s been doing that for hundreds of years. You can learn about biology. You can hike and raft or kayak and get to a place where you are totally alone. You can go bass fishing. You can see rock art. You can go look at carnivorous plants. You name it. The other thing I would really encourage people to do is, when they are in these parks, talk to the rangers. They have so much knowledge and they’re so good at sharing it. These people are true believers in these places, and they want you to love these places like they do.