Reel Fun at the Texas Freshwater Fisheries Center in Athens 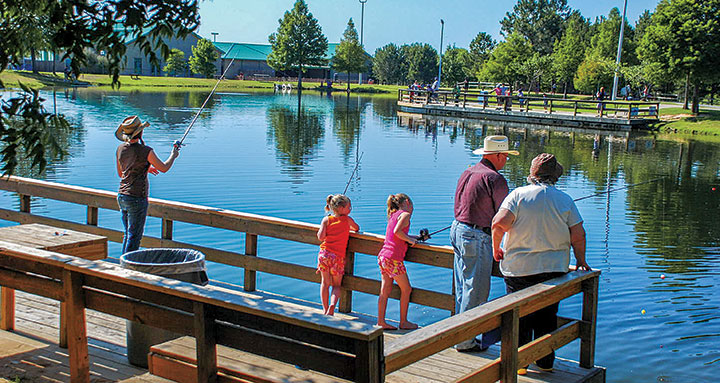 Casting my line into the water, I smiled to think I was no bigger than the little girl across from me when I last tried my hand at fishing. I sat on the pier, thinking about how much my grandkids would like this place.

Kick off summer with a special day of activities at the Texas Freshwater Fisheries Center from 9 a.m.-4 p.m. Saturday, June 6. The event will feature free admission for children 12 and under; free hot dogs and refreshments for all visitors; and a children’s fishing tournament.

After all, at the Texas Freshwater Fisheries Center east of Athens, no fishing license is required, and novices are always welcome.

So far, I hadn’t caught anything, but it didn’t much matter. The quiet of the morning, the cypress-fringed pond, and the happy squeals of the girl as she reeled in her first fish gave me a new appreciation for the sport. And I was just getting started.

Situated on 107 acres about an hour southeast of Dallas, the Freshwater Fisheries Center is managed by the Texas Parks & Wildlife Inland Fisheries Division. The mission is twofold, to promote freshwater sport fishing and conservation of Texas’ aquatic life, and also to educate and entertain, since people are more likely to protect something they feel connected to. Along with a fishing pond, there are multiple indoor and outdoor aquariums displaying dozens of species of native fish, waterfowl, alligators, and amphibians; a museum dedicated to fishing ephemera such as antique lures and specialized boats; an underwater theater where visitors can watch a staff member interact with a variety of creatures; and a three-quarter-mile wooded trail that affords the chance to see wildflowers and pitcher plants, a working beehive, and the occasional fox. And then there’s the hatchery. One of five state fish hatcheries responsible for maintaining the quality of fishing in Texas, it produces more than three million largemouth bass fingerlings annually.

Near the entrance, I noticed several signs featuring a cartoon fish named Ethel, who is the mascot of the Center’s ShareLunker Program, a groundbreaking effort that began in 1986 with the goal of strengthening the gene pool of Texas’ populations of largemouth bass. Longtime employee Larry Hodge told me that the real Ethel weighed more than 17 pounds when it was caught at Lake Fork.

“The ShareLunker Program encourages anglers who catch a fish weighing more than 13 pounds to donate it temporarily to us to use as a brooder,” said Hodge. “Their offspring are stocked into reservoirs statewide to share those lunker genes.” At the end of the spawning season, the angler can choose to retrieve his prize fish to release back into the wild or to donate it permanently to the Center. Anglers interested in bragging rights can rest easy; not only do they receive a lifetime fishing license, but also a professional fiberglass replica of the “one that didn’t get away.”

“Besides creating interest in fishing, Ethel and the more than 500 ShareLunkers caught since then have enabled TPWD biologists to develop safer procedures for lifting fish out of the water and keeping them alive once they’re caught,” explained Hodge.

After my brief orientation, I proceeded along a covered outdoor pathway to the Hill Country Stream Exhibit, which features a naturalistic, 60-foot-long aquarium brimming with bass, catfish, sunfish, and other native fish. The nearby Farm Pond Exhibit includes one of the most popular activities here: the opportunity to feed a hungry school of 20-pound catfish. When I tossed in the pellets of commercial fish food I’d purchased from a coin-operated dispenser, at least 25 fish rushed to the surface to gulp their meal. I jumped back to avoid getting splashed, but that’s not a consideration for most kids, who enjoy the comical ruckus.

I took a quick detour inside to explore the Visitor Center, which houses a well-stocked gift shop, as well as the Dive Theater and the Freshwater Fishing Hall of Fame, which features numerous aquariums and replicas of some of the state’s record fish. I marveled at the skeleton of a catfish named Splash, which weighed 121.5 pounds when it was caught at Lake Texoma in 2004. Splash lived at the Center for more than a year, and is still the state’s largest blue catfish on record. Rounding out my walk through the displays, I paused at a collection of antique lures, fishing nets, and boats, including a canoe, a cigar-shaped Cajun pirogue, and an original Skeeter bass boat, which was invented in nearby Marshall in 1948. I couldn’t help but think how much my grandfather, who loved to fish, would have enjoyed the special collection of ornate bait hooks.

It was now time for the Dive Show, so I grabbed a front-row seat in front of the aquarium, which is about 20 feet wide and 10 feet deep. A two-way communication system allowed the audience to pose questions to the scuba diver inside the tank, who was surrounded by catfish, sturgeon, smallmouth bass, and largemouth bass. While we learned about the behavior of some of the aquarium’s residents, I was impressed by the diver’s ability to simultaneously talk, feed the fish, and watch out for certain aquatic diners that hadn’t mastered table manners, namely a long-nose alligator gar named Fingers, which must be fed from the side.

It’s easy enough to explore most of the Center at a leisurely pace on a self-guided tour, but if you want to see the outdoors hatchery facility, you must take a free tram tour, where guides explain how the fish are raised in 45 ponds and indoor fiberglass troughs called raceways. Our tram operator stopped at one point to throw food into one of the outdoor ponds. I was surprised to see goldfish leap to the surface, until I learned that the Center raises millions of them to feed the bass.

As I left the Center that afternoon, I thought about what Hodge had said earlier: “Being outdoors with family, away from electronic distractions and competing activities, allows families to share experiences, develop skills, and make memories.” I made a mental note to put the Texas Freshwater Fisheries Center on my list of future family vacations.