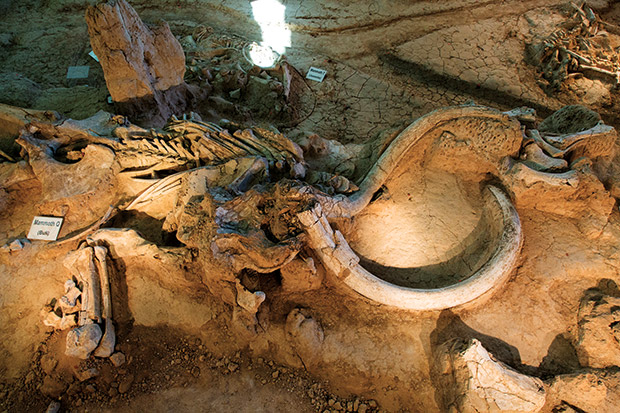 Some 65,000 years ago, a small herd of female Columbian mammoths and their babies wandered through a grassland in what is now north Waco during an intense rainstorm.

The Waco Mammoth National Monument, at 6220 Steinbeck Bend Dr. in Waco, opens daily 9-5. Access to the dig site is available only by guided tours, which take place every 30 minutes and last 45 minutes. Tour tickets cost $5 for adults, $4 for seniors, military, and students; and $3 for kids ages four through sixth grade. Call 254/750-7946.

The sweeping fields of tall grass, located between the Brazos and Bosque rivers about a mile from where the two rivers converge, weren’t covered in a heavy shroud of live oaks, mesquites, and juniper trees as they are today.

Instead, the area resembled the African savanna, populated not only by the hulking mammoths but also by saber-toothed cats, giant sloths, and even camels.

On that rainy day, paleontologists envision, torrents engorged one or both of the nearby rivers, causing tremendous floods and mudslides that swept the mammoths away and buried them in a morass of the region’s white clay. This summer, nearly 40 years after two teenagers discovered one of the mammoth’s bones, President Barack Obama proclaimed the excavation site a national monument, culminating local efforts to preserve the site for public education and future scientific study.

A visit to what the National Park Service calls “the nation’s first and only recorded discovery of a nursery herd of Pleistocene mammoths” offers a look at the bones and an examination of the lives of these creatures that lived many millions of years after dinosaurs became extinct. Paleontologists have found fossils from 24 mammoths and a few other ancient animals here. As a national monument, the site is adding four park rangers to work with city staff to run the facility and offer guided tours, which are the only way for the public to see the excavation site.

Tours begin outside on a bridge overlooking the ravine where Paul Barron and Eddie Bufkin in 1978 stumbled across a bone that was clearly too big to have been from a cow. They took it to Baylor University, where scientists identified it as part of a femur from a Columbian mammoth. Excited, the scientists gathered volunteers, armed them with bamboo scrapers and brushes, and began the tedious search for mammoths. Patiently they worked, eight to 10 feet down in a pit, often under a blazing Texas sun, for a dozen years.

“It was hard work, but when you keep finding more and more, it keeps your motivation going,” says Raegan King, the site manager.

By 1990, they had discovered 16 mammoths—all from the buried herd of females and juveniles. A herd’s females raised the babies, King explains, and they traveled together as a nursery herd. Around puberty, young males went off to journey separately.

These mammoths walked the earth about 150,000 to 10,000 years ago, King says. (By contrast, dinosaurs became extinct 65 million years ago.) Unlike the better-known, shorter woolly mammoths, which lived in the northern regions of the continent, Columbian mammoths might not have been as woolly. There was probably no need for a heavy coat in the warmer environments of southern North America and Central America.

Standing as tall as 14 feet and weighing about 10 tons, about twice the size of a modern-day elephant, Columbian mammoths grazed about 20 hours a day, consuming many hundreds of pounds of grass. They had five-toed feet and walked on their tippy-toes, supported by a pad at the base of their digits. The Columbian mammoth became extinct about 10,000 years ago, and although scientists aren’t sure why, they think a combination of climate change, hunting by humans, and food-source depletion whittled their numbers.

The excavation team unearthed the 16 nursery herd mammoths between 1978 and 1990, encasing the fossils in plaster and archiving them out of public view at Baylor’s Mayborn Museum Complex. The team continued working and found more bones—seven more mammoths, some probably from the same herd found earlier, along with three that paleontologists believe died about 14,000 years later. They also found the bones of a camel, some ribs from an unidentified animal, and a canine from a saber-toothed cat. Scientists think floods were responsible for burying these animals in mud, too.

For years, Baylor and Waco kept the bones secret to keep them from being disturbed, but in 1996, the owners donated the private property containing the dig site to the city. Waco and Baylor then incorporated the Waco Mammoth Foundation to raise money for a structure to be built around the site of discovery so that the public could see the bones exactly where they were found. The site opened to visitors in 2009, surrounded by a five-acre city park and another 102 acres of undeveloped land.

For a tour of the site, I join a class of fourth graders from Lorena and a senior citizens group from Fort Worth. We walk into the air-conditioned structure, and King points out a mural depicting what the Columbian mammoth might have looked like—might, because nobody knows for sure. Scientists know what woolly mammoths’ bodies looked like, because they were preserved in ice. But Texas didn’t ice over during the Pleistocene ice age, and all that remain from these Columbian mammoths are bones.

What’s known about these mammoths is what their skeletons reveal. As we gaze down from a catwalk at the bones lying in the pit of clay, it’s easy to discern a mammoth head, huge tusks, and ribs of a bull. As the group gathers around, oohing and snapping photos, King points out that one of the ribs has a bulge that indicates it had been broken, probably in a fight with another bull.

“This is the best part of paleontology,” King says. “You learn not just how the animals died, but how they lived.”

As we examine the bones of several mammoths, she points out the flat, ridged, worn teeth. They look something like the bottom of a tennis shoe. They’re flat, because mammoths were vegetarians and didn’t need sharp teeth to tear meat. Whereas we humans get two sets of teeth, mammoths got six. Once the last set of teeth was ground down—thought to be about 75 years after birth—the animal was no longer able to eat and died.

Near the bull mammoth, King points out the remains of a camel. Texas camels probably didn’t have humps; they may not have evolved the need for moisture-storing fat deposits. She also shows us a replica of a saber-cat’s tooth (because the original is in storage) and a couple of rib bones from an as-yet-unidentified animal. King says she’s sure it will be identified if digging resumes and the rest of its bones turn up.

And they are almost sure to turn up. King says that as dirt collapsed while the site structure was being built, another mammoth—the 24th to be found—was revealed. Excavators carefully tucked it back in the earth to be examined later. At the time, Baylor was out of room to store more mammoth bones at the Mayborn. But King says that the presidential proclamation that the dig site is now Waco Mammoth National Monument will likely change that by bringing more tourists, more scientific attention, and more digging.