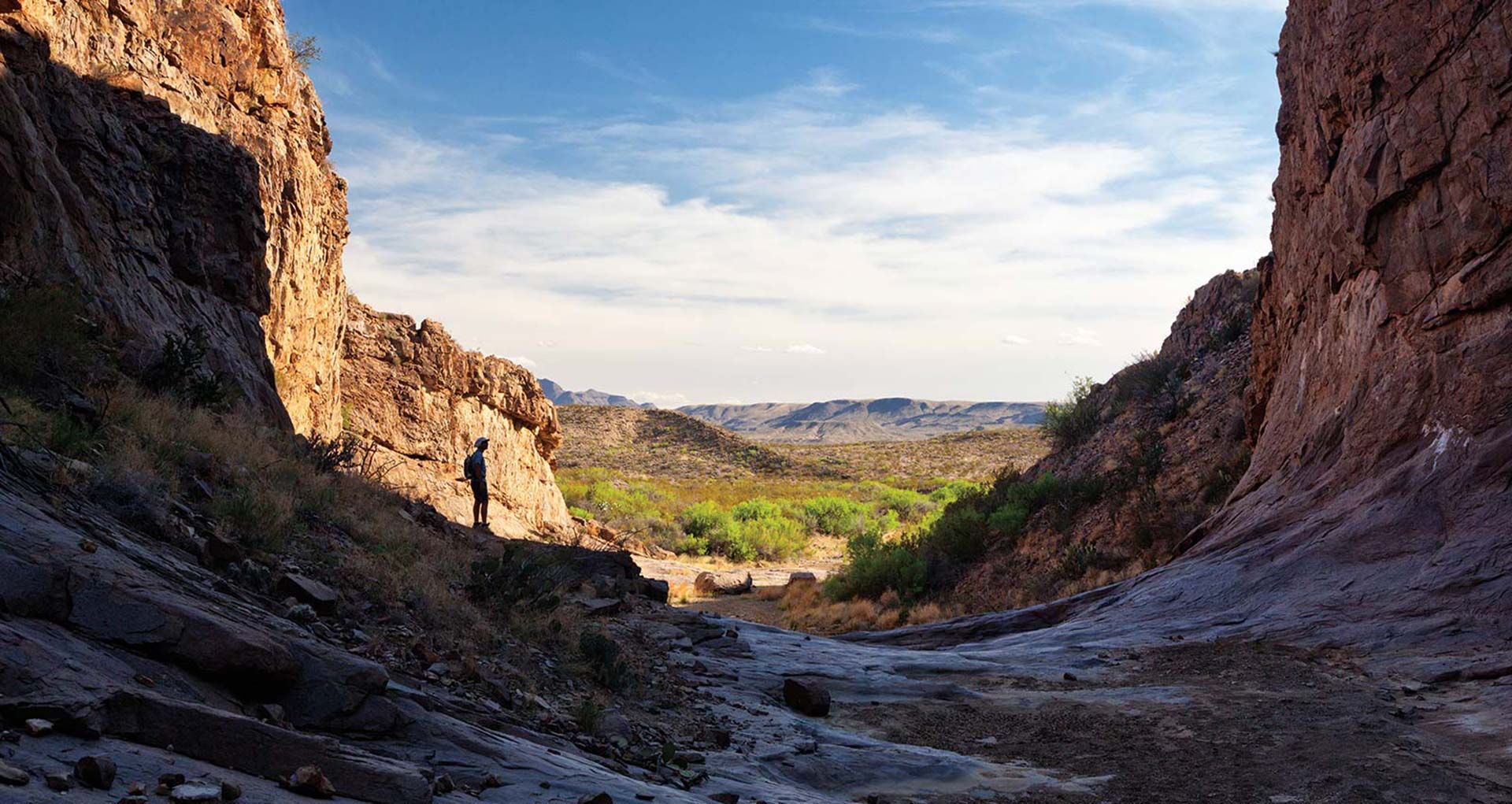 In February 2015, Globe Pequot Press released the 3rd edition of Texas writer/photographer Laurence Parent’s popular book Hiking Big Bend, introducing fresh photos and updated information. And, since Texas Highways published two of Laurence’s photo-driven articles about Big Bend in the February 2015 issue, we thought the timing was perfect to ask Laurence about some of his favorite hikes around the state.

South Rim Loop, Big Bend National Park. “This is a challenging hike—almost 13 miles round-trip, with a 2,000-foot elevation gain–but it’s got some of the prettiest views in Texas. If you can do it, you should do it.”

Guadalupe Peak, Guadalupe Mountains National Park. “It’s the highest peak in Texas (9,749 feet) with spectacular views. I’ve climbed 43 of the state’s highest peaks. For me, the reward is that you work really hard to get there, and you have this spectacular view, and you feel a little virtuous, and now you can have a snack and know that it’s downhill going back. It’s only half-done when you get to the top. It’s almost more treacherous going down.”

North Franklin Peak, Franklin Mountains State Park. “I like climbing this peak. It’s a hard climb, the highest point in El Paso (7,192 feet in elevation). One thing I like to do is to take a good headlamp and stay up there until sunset, then watch the city lights come up. You can camp at the trailhead and go back down in the morning.”

Turkey Creek Trail, Big Thicket National Preserve. “I’m a western guy at heart; I like the wide-open spaces. But this is a beautiful hike (15 miles), through woodlands, creeks, and cypress swamps, over footbridges…it’s very East Texas. It’s flat so it’s easy unless it has been raining a lot.”

McKittrick Canyon, Guadalupe Mountains State Park. “The hike is great in the fall, and it’s pretty easy. It’s almost flat, and you go through a deep, spectacular canyon, with a running stream and lots of maples. Great fall color, with reds, scarlets, orange, gold. In a good year, it has some of the best fall color in Texas.”

West Loop Trail, Lost Maples State Natural Area. “Well, either of the loops at the park are great. They’re especially nice in the fall, but also pretty in spring and much quieter. Together, the hikes are about 10 miles and not especially hard; you only gain 200-300 feet in elevation. It’s a quiet corner of the Hill Country.”

Enchanted Rock, Enchanted Rock State Natural Area. “This is no news to anyone. I like to hike there very early or very late in the day; the light is nice and it’s less crowded. I usually camp out there when I do it. Don’t just hike the rock to the top; hike the loop around the rock. It’s quieter and very pretty.”

Go to the Camping Guide
From the February 2015 issue