A City Slicker Fulfills His Lifelong Dream of Riding a Horse

With the right teacher, you’re never too old for a horseback ride

Written by Art Williams, Photographs by Will van Overbeek | From the February 2018 issue | Updated: January 15, 2018 | Filed Under: Outdoors 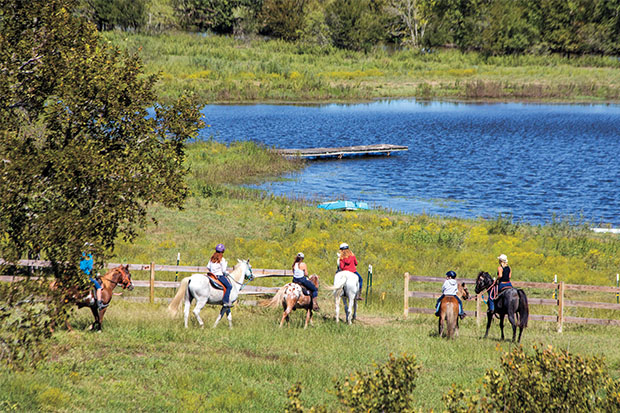 Maverick Horseback Riding in Lockhart offers a wide range of lessons and rides for all ages and levels of experience.

The cowboy philosopher Will Rogers          once said, “A man that don’t love a horse, there is something the matter with him.” A bona fide movie star, Rogers also observed that an actor isn’t any thing special: “He’s a fellow that just has a little more monkey in him.”

Located on the outskirts of Lockhart, about 30 minutes southeast of Austin.
· Reservations required
· 512-230-8413
· maverickhorsebackriding.com

Both those maxims came to mind recently when my actor friend Joe Stevens, who’s got enough monkey to have appeared on the silver screen in True Grit and other flicks, got to talking about horses. Joe commented that some actors, when auditioning for a role that required riding, fibbed about their experience on horseback and found themselves in a pickle when called upon to prove it. Joe also allowed that while he’s not a “real cowboy,” he does fine on a “movie horse.”

That got me to thinking about my bucket list. I don’t quite have a bucket yet, but as a geezer-in-waiting I do have some mileage on my mortal chassis. And while I’m not particularly stove up from age, I feel an urgency to get up and go for the gusto in certain areas. Among those long-simmering, better-get-after-it desires is riding a horse.

Until recently, I had ridden exactly once in my life, for about 20 minutes. To remedy that shortcoming, I made an appointment for a lesson with horsewoman Joan Marie MacCoy at Maverick Horseback Riding in Lockhart, one of many horse stables across the state that teach beginners of all ages. I am of the opinion that “maverick” is one of the finest words to ever stray into the English lexicon—I aspire to personify its definition—and I found that Lockhart’s Maverick lives up to that storied name. 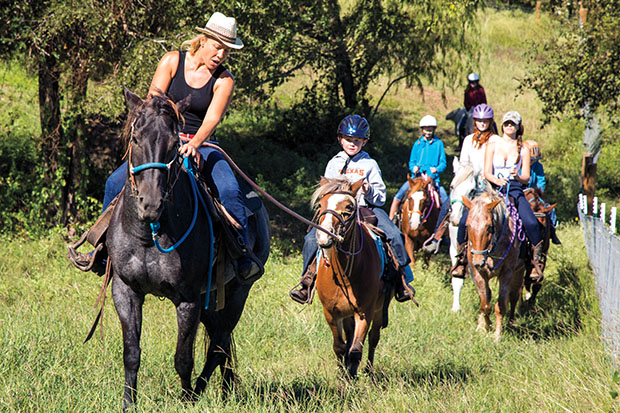 A North Carolina transplant, Joan Marie began her equestrian education at 4 years old. From 7 to 16, she was schooled in the hunter-jumper field of riding, and by 18 she was train- ing horses. After relocating to Central Texas, she founded her own horseback riding educational facility nearly six years ago.

While I normally jump at any opportunity to wear my black felt Resistol from Sam’s Boot Corral in Del Rio, I opted for a riding helmet for the lesson as a precaution. Before saddling the horse I was going to ride, an Appaloosa named Rowdy, Joan Marie had me groom him with a brush to get acquainted. Then she said we needed to let the horses stand a bit, to let some air out, before tightening the cinch. Rowdy, she explained, came from a rescue facility and earned his
name due to the “pep in his step.”

“Our brains are trained to glance and move on. You have to see where you are asking the horse’s feet to go.”

Six or seven others riders also joined the ride. One of our group saddled Apache, the other resident Appaloosa, and another rode Ghost, a horse Joan Marie described as “a flea-bitten grey.” She led the group on her horse named Maverick, half Percheron and half Arabian. In the horse’s online biography, Joan Marie describes the 23-year- old as a “stickler for the rules” who “expects his riders to sit up with poise, think about what they are asking the horse to do, and execute their request without yanking or popping the reins or losing focus.”

The first rule, Joan Marie elaborated before we mounted up, is to “look.”

“We don’t normally process things the way we need to when on horse- back,” she explained. “Our brains are trained to glance and move on. You have to see where you are asking the horse’s feet to go.”

Next, your heel should be lower than the rest of your foot, and the balls of your feet should be secure in the stirrup. Third, it’s important to sit up straight in the saddle and breathe. Hold the reins on the other side of
the saddle horn from your body, and keep your hands active. Pay attention. “Be present in the moment,” Joan Marie instructed.

That last rule might sound unnecessary, but it’s one of the most important. I had a blast on the ride, but I noticed from the get-go that I had to maintain focus. “There’s a common miscon- ception that horseback riding is not
a sport,” Joan Marie later explained. “But it’s really the hardest sport.” She grew up competing in soccer and other sports. But a horse, of course, changes the equation. “They have their own emotions and feelings—they could have a headache or a sore back and decide to chuck you off. It’s really an intense physical activity.” 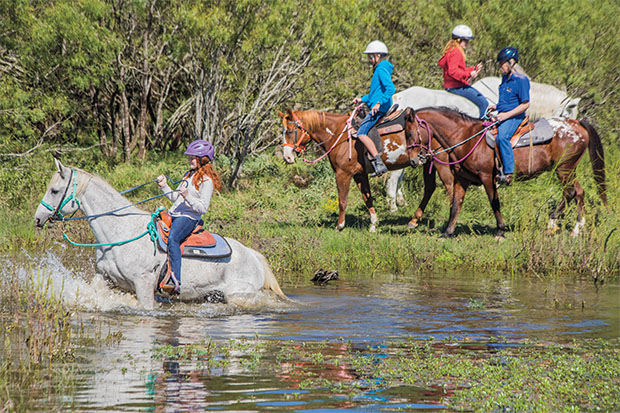 Fortunately, none of our group hit the sod as we rode for an hour and a half through 100 scenic acres comprised of a valley, pond, and hilly trails shaded by stands of live oak, mesquite, willow, and cedar elm trees. Joan Marie has access to another 400 acres nearby for longer rides. Fluent in English and Spanish, she also offers a wide range of lessons and rides for all ages and levels of experience, from individual instruc- tion to group outings, equine and ranch care classes, birthday parties, summer camps, horseback yoga, and programs for families with autistic children.

Joan Marie even accepts students of greater vintage than me, cautioning that falls can be worse for older folks. Everyone said I would be sore as
heck the day after the ride, but I wasn’t. Instead, I felt physically tuned up
and centered.

“Riding increases mobility of the human spine,” Joan Marie said. “I’ve had back problems, and it really helps with that. Simply being around horses can be therapeutic and calming.”

Amen. Like another Gene from Texas, I can’t wait to say, “I’m back in the saddle again.”