A collection of Houston's oddball attractions—mostly inside the Loop 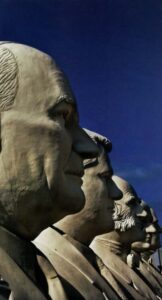 Only here can one marvel at a house covered in flattened beer cans and a jungle gym-style tribute to the orange that spreads across two residential lots. Only here are funerals fodder for museums. And only here does a 36-foot-tall sculpture of a cellist serenade passersby with classical music on a downtown sidewalk.

Today’s Houston thrives as an entrepreneurial heaven, the roots of which go back to the city’s founding in 1836 as part of a 6, <900-acre real estate promotion. The come-on ad that developers John K. Allen and Augustus Chapman Allen placed in the Texas Register on August 30 of that year trumpeted Houston’s location “at a point on the river which must ever command the trade of the largest and richest portion of Texas.”

That “river” was sluggish and muddy Buffalo Bayou, and that “richest portion of Texas” was mostly piney thickets and salt grass prairie barely 60 feet higher than the Gulf of Mexico—potential flood territory for sure.

Exhibiting a second stroke of marketing genius, the Allen brothers named their pie-in-the-sky settlement after the hero du jour, Sam Houston, and never looked back. Within a year Houston had become (temporarily) the capital of the Republic of Texas, and (permanently) a mecca to individualists eager to follow their own stars. That basic civic trait has not changed in the ensuing 174 years. Entrepreneurs and outright characters of all stripes still thrive here, and you’ll both grin and puzzle as you explore their continuing contributions to the city’s zany Zeitgeist. Save for one, all of the following sites fall inside the (I-610) Loop—perfectly proximate for a “tour de bizarre.”

Just approaching the pseudo-chrome entrance to The Art Car Museum sets the pace for a Quirky Houston day. Two blocks south ofI-10 and immediately west of downtown on the fringes of residential Houston Heights, this privately owned showcase of mobile contemporary art is affectionately known as the “Garage Mahal.” Don’t worry about missing this smallish place- just watch for a silvery-looking building topped by sculptures that look like common auto parts and tools on steroids. Designed by car artist David Best, the building’s exterior visually proclaims this museum’s inside punch.

Drawing from both a permanent collection and temporary loans from Houston’s numerous car artists, the museum’s exhibits usually change every three months. Rampant imagination as applied to anything that rolls—Caddies, VWs, trucks, vans, Jeeps, lowriders, bikes, bathtubs on wheels, lawnmowers, and more-is the rule. All are operational and gussied up almost beyond recognition (think elaborate paintjobs and glued-on items, from musical instruments to Legos to sinks). Many of these show cars have won prizes in the city’s popular pinnacle of quirkiness, the annual Art Car Parade. (The 23rd edition of same rolls May 8, 2010.)

If you are in this west-of-downtown area on a Friday or Saturday afternoon, consider stopping in at the Texas Junk Company. Last year, owner Robert Novotney celebrated 30 years in business in what was originally an auto repair shop, and you never know what you will find.

“I have a shop full of objects I pick up from all around the city and state;’ notes Novotney, who adds that “Artists come in and buy them for assemblages.

“Most folks come here looking for picture frames or cowboy boots,” he continues. Indeed, frames hang almost everywhere and an estimated 1,500 pairs of “experienced” boots (average price $50) fill one end of his shop, many of the latter garnered on his annual driving loops through the high west of Colorado, Wyoming, and Montana. From old cow bones to doorknobs, vintage wooden doors to vinyl phonograph records, rotary phones to colored pencils, Novotney’s maze of items defies organization or full description. Come prepared to muck about a bit—expect dust—and if you’ve been searching for a specific wing nut, bolt, nail, or widget, bring your specs or sample. It’s probably here—somewhere.

About three miles away from the Texas Junk Company stands John Milkovisch’s Beer Can House, a simple frame bungalow when it was built in the 1930s and now one of the country’s more bizarre examples of folk art.

For decades, Milkovisch worked nearby as an upholsterer for the Southern Pacific Railroad, picking up whatever he found—rocks, marbles, bits of pottery and metal—on his daily walks to and from work. In 1968 he began setting his finds into cement and redwood, covering first his front and side yards and then the back. Asked why he was “paving” his yard, he responded, “I got sick of mowing grass.”

Milkovisch also liked to drink beer (he said his favorite was “Whatever’s on sale”), and, with help from his wife, Mary, and friends, sometimes drank a six-pack a day or more. As the beer cans emptied, John cut off the tops and bottoms, then nailed the flattened remainder—an estimated 50,000 of them eventually—to the sides of his house. The rest of the can (and later, pull tabs) became long strands of tinkling metal suspended as shade curtains from the porch and eaves. Overall, the project was a 20-year labor of libacious love. You can tour the house during the week (by appointment) and on Saturday and Sunday.

Across town, another equally whimsical product of one man’s imagination, The Orange Show, draws visitors to another residential neighborhood. Created by Jeff McKissack, who worked most of his life as a postman, it opened in 1979 after 25 years of McKissack’s puttering construction. In his words: “The main purpose of The Orange Show is to encourage people to eat oranges, drink oranges, and be highly amused.”

His personal views on health and life in general pepper  this 3,000-square-foot structure, a maze of stairs, steps, paths, pipe, rock, wheels, concrete, statues, whirligigs, tractor seats, and other “found” things—whatever piqued his imagination. Deluded by the intensity of his mission, McKissack believed that his creation would rival the Astrodome as a major tourist attraction. However, the tremendous crowds he had hoped for did not materialize, and he died a disappointed man eight months after the show opened. In the ensuing 30 years, however, more than half-a-million visitors have prowled his bizarre structure, now preserved as a monument to idiosyncratic artists everywhere.

Only Houston has Radio Music Theatre, a trio of performers who bring back the clean fun of yesteryear’s radio shows via what they call “controlled chaos.” From satire and short sketches to full-length original plays—DVDs of several RMT classics, including A Fertle Holiday, Wiener Day at the Rollercade, and Just Shut Up and Drive, can be ordered online—RMT’s zany characters always leave their audiences laughing. Coming up in 2010: “Fear of Ducks;’ a Houston satire, and “Birthday From Hell,” a take-off on soap-opera angst.

No exploration of quirky Houston should exclude a stop at the Variety Fair 5 & 10 in Rice Village, little changed since it opened in 1948. One step in the door, and many folks teleport back to childhood with a 50-cent allowance in hand. Want Necco Wafers, penny candy, or a metal Roy Rogers lunch box? How about SenSen, hair nets, or Teaberry Gum? All are here plus more, mixed in with inexpensive sundries of today. Timely hint: This old five-and-dime’s Victorian Valentines remain favorites, year after year.

Vintage finds of another kind fill the National Museum of Funeral History, just offI-45 north of town. It’s the largest exhibit of its kind in the country. With the motto “any day above ground is a good one;’ this collection exhibits one-of-a-kind hearses (including a sleigh and a funeral bus); information and artifacts relating to funerals of the rich and famous; and (among other things) a massive exhibit on the lives and deaths of Catholic popes, produced with extensive assistance from the Vatican. The latter focuses specifically on the death of Pope John Paul II, including an authentic reproduction of his crypt.

Oddities often come into view as you drive Houston’s surface roads and freeways. There’s the sculpture of a half-peeled banana alongside I-45 just north of downtown (Quitman Street exit); a massive Ferris wheel that seems close enough to touch as you swing around and downtown’s skyscrapers on I -45; and the Tribute to American Statesmanship sculptures viewable from the far right lane of I-10 east, just before that highway joins I-45 south. Each of these four historic “heads” by Houston-based artist David Adickes—George Washington, Abraham Lincoln, Sam Houston, and Stephen F. Austin—stands 22 feet tall, and collectively they have been nicknamed “Mount Rush-hour.” Adickes also created the aforementioned banana, the towering sculpture of Sam Houston on I-45 south of Huntsville, and The Virtuoso, a 36-foot-tall sculpture of a cellist, which plays classical music in front of the Lyric Centre downtown.

Keep a sharp lookout—more quirky stuff pops with regularity in the nation’s fourth largest city and its suburbs. Come ready to explore, laugh, and discover the real Houston.