A Hotel Emma getaway at the Pearl in San Antonio 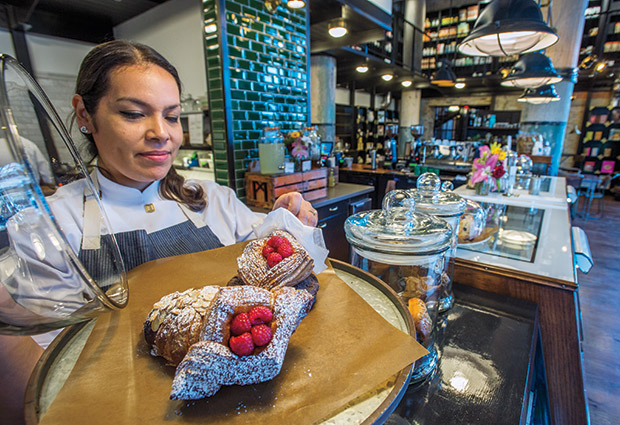 Like many urbanites, my daily grind includes too much traffic and too many frazzled nerves. After one recent particularly hectic stretch, my husband John and I were in dire need of an escape. We imagined a weekend without getting into a car that would allow us to relax, eat great food, take in some culture, and spend time outdoors.

Our craving for a break coincided with enticing reports of San Antonio’s new Hotel Emma, which opened in November at the Pearl, the mixed-use redevelopment of the historic Pearl Brewery. As we hoped it might, the boutique hotel fit the bill—and more. From the moment we pulled into the hotel’s circle drive on a Friday afternoon and handed over our car keys to the guayabera-clad valet, the stress melted away.

Isaac, our eager and informed bellman, took charge of the luggage and ushered us to the library, which holds the 3,700-book collection of local novelist Sherry Kafka Wagner and doubles as a makeshift bar in the afternoons. A bartender presented us with complimentary hand-shaken margaritas, and we sipped the refreshing concoction as Isaac shepherded us on a brief tour of the lobby.

The brainchild of San Antonio businessman Christopher “Kit” Goldsbury, the former Pace Foods’ owner who sold the salsa maker to Campbell Soup in 1994, the Pearl preserves more than a century of industrial history, renovated and repurposed with Hotel Emma as the crown jewel. Goldsbury’s vision created a home for the acclaimed San Antonio campus of the Culinary Institute of America, a slew of farm-to-table restaurants from some of the city’s finest chefs, a farmers market, retail shops, an amphitheater, and apartments—all with direct access to the River Walk’s Museum Reach.

Founded in 1883, the Pearl Brewery made beer until 2001 (excepting a 14-year Prohibition hiatus). Goldsbury’s redevelopment project started a couple of years later, culminating with the completion of Hotel Emma, which is built around the original brew house. The hotel’s “high/low” vibe incorporates industrial features such as the turbine-like ammonia compressor anchoring the lobby and cozy seating areas with leather sofas draped in colorful throws and pillows—a style that marries aspects of a Mexican hacienda and an urban boutique hotel.

In our dapper and spacious room, tall windows provided an expansive view of the River Walk. The room felt less like a hotel and more like a vintage private club with clever modern amenities and thoughtful touches. A large cabinet stored snacks, as well as dishes, cloth napkins, and even a cocktail shaker. In the closet, we found slippers and blue-striped seersucker bathrobes made by Dos Carolinas, the custom guayabera tailor located in the Pearl’s retail section. We were tempted to kick back in the room, but adventure beckoned. 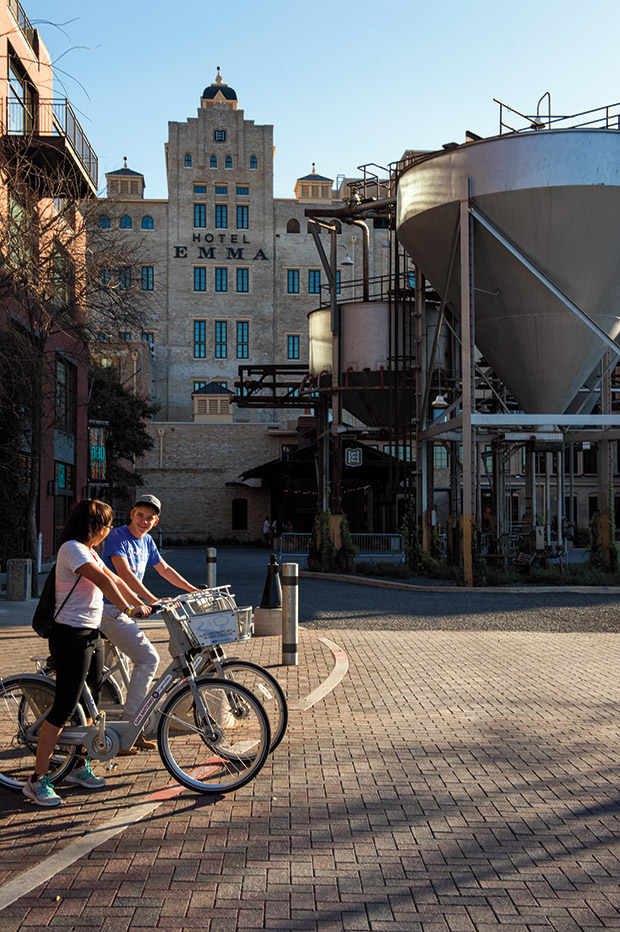 In keeping with the theme of repurposed brewery buildings, we strolled less than a half-mile on the River Walk to the San Antonio Museum of Art, which occupies the former Lone Star Brewery. We marveled at the art installations along the trail, including the brightly colored fish sculptures suspended from the Interstate 35 overpass. On Fridays, the museum stays open until 9 p.m., giving us plenty of time to amble through the spacious galleries, including the Latin American collection, my favorite, which spans 4,000 years from Pre-Columbian artifacts to works by 20th-Century Mexican artists Diego Rivera and José Clemente Orozco, as well as contemporary artists.

For dinner, we walked back to the Pearl for a meal with friends at Southerleigh. This rustically refined restaurant honors the Pearl’s heritage with its onsite craft brewery. The four of us whiled away the evening catching up on jobs and kids, sampling local beers, and working our way through the “Texas cross-cultural” menu. Not to be missed are the fried snapper throats, a plateful of triangular fish wedges complete with crispy fins akimbo. Don’t be deterred by the name; they were so delectable that we polished off the perfectly seasoned and fried succulent fish morsels before they cooled.

Saturday morning started in the lobby’s east end with complimentary local Merit Roasting Co. coffee (brewed pour-over style) and bite-size pecan muffins served in front of an array of red pipes. Known as king valves, these red pipes once controlled the brewery’s compressed ammonia to keep the beer cooled as it aged in various cellars.

The lobby nibbles were just the overture to a full breakfast at Supper, Hotel Emma’s restaurant under the culinary stewardship of Chef John Brand. In the sunny bistro, my husband and I shared bites of chorizo Scotch eggs served over green chile cornbread; heavenly light and delicate Meyer lemon ricotta pancakes with pine nuts and raspberries; and the delicious millionaire’s bacon, rich slab bacon finished with a drizzle of sorghum syrup.

Before setting out for the day, we stopped at Larder, the hotel’s gourmet grocery, which carries snacks and baked sweets. We ordered a wood-grilled lamb sandwich on ciabatta bread and a butternut squash salad for the road. Armed with maps and the concierge’s suggested route, we hopped on the hotel’s complimentary bikes and headed down the River Walk path to the San Antonio Mission Trail.

The trail follows the River Walk and wends through old neighborhoods as it connects four 18th-Century outposts founded by Franciscan missionaries. Our destination? Mission San José, a 17-mile round trip from Hotel Emma. Strolling Mission San José’s walled Spanish outpost was like stepping back in time. We imagined the life of the missionaries and the 350 indigenous Texans who resided in the dwellings that line the mission’s perimeter.

Making our way back to Hotel Emma in the late afternoon, we headed for post-ride cocktails at Sternewirth. The bar takes its name from the “Sternewirth Privilege,” a 19th-Century brewery custom of allowing employees free beer during the workday. Late-afternoon sunlight cast a warm glow as we sank into a leather sofa. Behind us, other visitors relaxed in repurposed 7,000-gallon fermentation tanks, which have been cleverly cut open and look something like sultans’ tents.

I ordered the Three Emmas cocktail, a delicious, boozy concoction of gin, Italian amaro, apricot, and a dash of absinthe. The libation gets its name from the real-life melodrama of three women in the life of Otto Koehler, who owned the Pearl Brewery from 1902 until his death in 1914. The first Emma was Otto’s wife, who ran the brewery after her husband died and for whom the hotel is named. The second Emma was a caretaker for Mrs. Koehler when she was bedridden after a car accident. Emma II became Otto’s mistress but eventually married someone else. The third Emma was also a caretaker for Mrs. Koehler and also a mistress of Otto. Emma III rebuffed Otto’s marriage proposal and shot him to death in what she claimed was self-defense. As our server explained, “One Emma is delightful, two and you are flirting with trouble, but three—well, three will kill you!” I stopped at one, just to be sure.

That afternoon, we popped into a few of the Pearl’s retail shops. Dos Carolinas, the clothier that made the uniforms for much of the hotel staff, carries racks of colorful guayaberas. At Melissa Guerra’s Latin Kitchen Market, we surveyed the inventory of gorgeous traditional Spanish and Mexican ceramics and glassware, and I treated myself to a set of Texas-themed cookie cutters.

After a day of activity, I wanted to be sure we got some time to enjoy the room. John and I each commandeered a corner of the couch and spent an all-too-rare hour reading, occasionally glancing up to watch the River Walk transform as dusk’s long shadows turned into nightfall. It was a perfect prelude to a delectable dinner at Supper.

We eased into Sunday morning, knowing that in due time we would face the workweek ahead. We strolled the Pearl Farmers Market, a bustling mix of vendors selling local produce and artisanal foods on Saturdays and Sundays year-round. Then, we put a bow on this gift of a weekend with a hearty brunch of pork carnitas and poached eggs at Boiler House, housed in—you guessed it—the brewery’s boiler room. Rested, relaxed, and fulfilled with experiences from a memorable weekend, it was time to retrieve the car keys and head home.

This story has been updated to reflect current prices as of June 11, 2021.