Revisit the drama of Dallas at Southfork Ranch 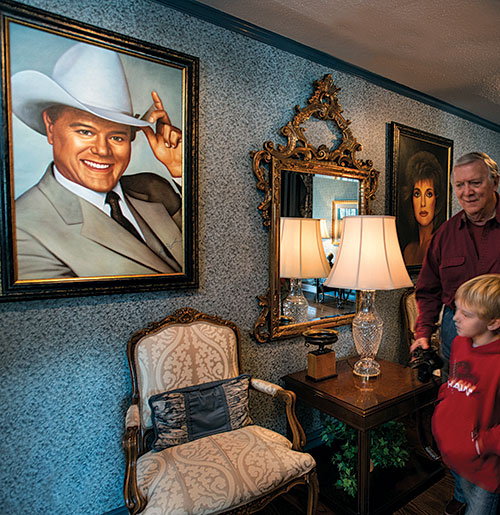 About 30 years ago, a trailblazing soap opera about a greedy, glamorous, and volatile Texas family captivated millions of viewers around the globe.

The CBS series Dallas portrayed a Texas-size world full of intrigue and larger-than-life characters, like the ruthless J.R. Ewing and his philandering, wildcatter father, Jock. And despite the Ewing family’s excesses, over the course of the original show’s run from 1978 to 1991, millions of devoted viewers in dozens of countries came to feel at home at the fictional family’s country estate.

Southfork Ranch and the Ewing Mansion, quaintly framed by green pastures and an elegant, live oak-lined driveway, became international symbols of Southern drama, their images broadcast into living rooms around the world every week. (A staggering 83 million people tuned in to find out who shot J.R. in the “Who Done It?” episode in November 1980—at the time, the highest-rated television episode in U.S. history.) But in off-screen reality, the property was a privately owned Quarter Horse ranch in Parker, just north of Plano, that was home to a real family. And by 1984, after multiple incidents of coming home to find strangers swimming in their pool and taking pictures through their living room windows, the ranch’s original owners moved away to escape the show’s limelight.

Southfork Ranch offers 11 tours per day. A tractor-pulled tram takes visitors from the visitor center to a gift shop, and throughout some of the ranch’s 340 acres.

Today, the 340-acre property—owned and operated by Forever Resorts since 1992—is a full-service tourist and special-event destination, offering daily tours of the Ewing Mansion and ranch. And now, more than 20 years after the original show went off the air, Southfork is experiencing a revival thanks to a new Dallas series that’s in its third season on TNT. Since the new generation of Dallas premiered in 2012, Southfork’s annual attendance has doubled to more than 300,000 visitors each year, says Sally Peavy, a Southfork tour guide since 1997.

“That’s always been my favorite part—meeting people from all over the world,” Peavy says. “We’ve had visitors from Bangladesh, Romania, and Iran, just to name a few. … I’ve seen some international visitors start crying when they hear the Dallas theme song being played on the back patio.”

The Ewing Mansion—Southfork’s most recognizable landmark with its familiar white pillars and manicured hedges—elicits the most dramatic response from visitors. Originally built in 1970, the four-bedroom home underwent a complete renovation in 1992, including cosmetic repairs and the addition of themed rooms inspired by the 1980s characters.

Producers of the current Dallas series film the show entirely on location in the Dallas area, including scenes at Southfork itself, but the original series’ interior shots were filmed mostly on California sound stages. So even though the mansion’s interiors aren’t exact re-creations of the original (or current) show, the rooms still exude the Ewings’ epic, over-the-top style. Think crystal chandeliers, leather wall coverings, down-filled couches, and a massive, mounted Longhorn. There’s something to dazzle the eye in every extravagant corner. A stately portrait of Jock Ewing (played by the late Jim Davis) hangs over the living room mantel, and mirrored walls frame an opulent, rose-colored Jacuzzi tub in the master bathroom.

Peavy says that visitors whip out their cameras most in one particular room—a re-creation of the motel room where J.R. was shot, a second time, in Season Two of the TNT series. (Dallas writers scripted the death after Larry Hagman—the Fort Worth-born actor who played J.R.—succumbed to cancer in November 2012.) The scene was set in Mexico but is now on display for Southfork visitors in its exact, hap-hazard state, complete with disheveled bed sheets and J.R.’s jagged chalk outline etched on the faux-hardwood floor. A barrier separates visitors from the preserved “crime scene” to deter pilfering by overly eager souvenir hunters. Nonetheless, Peavy admits that devotees have managed to leave their mark in the Ewing Mansion. One day, while a Southfork employee was changing a light bulb above J.R.’s bed in the mansion’s master bedroom, he discovered a photo of a man tucked just underneath the bed comforter. The inscription on the back of the picture listed a birth and death date and the phrase: “This is where we knew you would like to be.”

Beyond the mansion, Dallas memorabilia can be found within Southfork’s two gift shops and a self-guided museum. The museum features a cinematic entryway, complete with beaming neon letters spelling D-A-L-L-A-S and director’s chairs for each original cast member. Next are rooms displaying infamous props, like the gun used to shoot J.R. (the first time) and its snakeskin holster, and Lucy Ewing’s wedding dress.

And despite its association with Dallas, Peavy says Southfork also cap-tivates visitors who have never seen the show, thanks to the estate’s sweeping green pastures, towering live oaks, and lackadaisically grazing Long-horns. “It sort of gives off that Gone With the Wind feeling,” Peavy says. And onsite attractions, like horseback trail rides and Miss Ellie’s Porch Deli, provide a well-rounded detour for any Texas traveler—whether you like your entertainment merely dramatic, or Dallas dramatic.