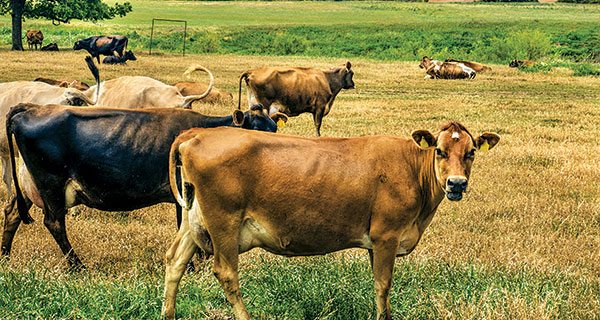 My first taste of the Texas cheese renaissance came at a farmers market in Dallas, where I nibbled a bite of Veldhuizen Texas Farmstead Cheese from Dublin. “This cheddar is made in Texas?” I exclaimed, shocked at how much it reminded me of flavorful cheeses from Wisconsin and England.

Cheesemakers are popping up across Texas. Find locations at texascheesetour.com.

Before long, I was seeking out specialty cheese shops like Scardello in Dallas, Antonelli’s in Austin, and Houston Dairymaids. What I found was that Texas has indeed become a very “big cheese” in the past few years. While some cheesemakers date back further, Texas has seen a surge of boutique cheesemakers enter the market in the past decade. There are as many as 30 such businesses across the state, and several have won awards from the American Cheese Society. The bounty of companies making artisan cheeses rivaling those of California or France inspired me to set out on a tour of cheese discovery around our state. Join me on the journey and bring a big cooler, but be warned: You’ll find many of these cheeses as addicting as I do.

On a narrow county road less than 90 miles southwest of Fort Worth, rolling pastures of brilliant green spread over the 180-acre Veldhuizen family farm. Beautiful big-eyed cows graze on pesticide-free grasses; I coo over the sweet newborn calves, awaiting their next bottle-feeding.

At least four times a week, inside the farm’s main building, Stuart Veldhuizen and a small crew of helpers pour raw milk into a 300-gallon steel-lined vat, its wooden exterior imparting an old-world feel to their operation. The Veldhuizen crew uses the vat to convert milk into thick curds, which are then drained of whey, salted, and formed into molds. It’s wet, strenuous work that produces 285 pounds of cheese per batch to meet demand that’s grown steadily since the farm started making cheese 12 years ago.

Stuart takes me to his vast, stone-fronted cheese cave, built into a natural berm, where hundreds of yellowish-orange rounds of cheese, most weighing between 13 and 16 pounds, rest in various stages of aging. Systematically, the dairy rotates the cheeses daily until they reach their desired age; the average is nine months. There’s a slightly musty smell, not at all unpleasant. In another building, made of papercrete and air-conditioned, the Veldhuizens age their popular seven-pound rounds of Bosque Blue, a rich, golden-hued blue cheese streaked with blue veins. In both places, I yearn to tear into a wheel.

At the farm’s cheese shop, Connie Veldhuizen uses a long, narrow antique blade to slice cheese for sale at the shop, via mail order, and at stores, farmers markets, and restaurants across the state. As I leave, I take with me carefully wrapped packages of jalapeño cheddar, Redneck Cheddar (made with either Shiner or Saint Arnold beer), and the very Stilton-like Bosque Blue. I keep my eyes peeled for the nearest picnic site.

Arriving in Marfa with a group of friends eager to consume the Trans-Pecos’ culinary treasures, my gang is especially keen on taking a cheesemaking class at Marfa Maid. Malinda Beeman and Allan McClane call the 15-acre spread their “Little Dairy on the Prairie,” but it’s actually high desert country, a perfect landscape for hardy goats. Upon arriving, we meet the soft-spoken, dry-witted Beeman, an accomplished artist whose paintings of goats caught my attention at the Greasewood Gallery at Marfa’s Hotel Paisano. She creates elegant artisan cheeses with McClane, whose experience at his grandfather’s Cape Cod dairy introduced him to the milking and caretaking of the animals.

As part of the cheesemaking class, Beeman leads our group on a tour of the farm, introducing us to her bevy of affectionate, playful goats. Eventually, we move into the stainless-steel kitchen, where she demonstrates the process of converting milk into curds, which are then worked into various goat cheeses. Marfa Maid’s most popular variety is chèvre, which is found on restaurant menus in the area, as well as at specialty grocery stores and at local farmers markets.

Next, we scrub our hands at the sink and learn to make the Italian-style cheese known as ricotta, which we flavor with spices and herbs. We delight in Beeman’s artistic talent as she wraps our cheeses inside grape leaves, tying them with twine for presentation suitable for a fine cheese shop. The tasting part of the program is a favorite, as well; I’m fondest of the chèvre and herbed feta. Before leaving Marfa, we stock up on more of Marfa Maid goods at The Get Go, a popular gourmet grocer in town. 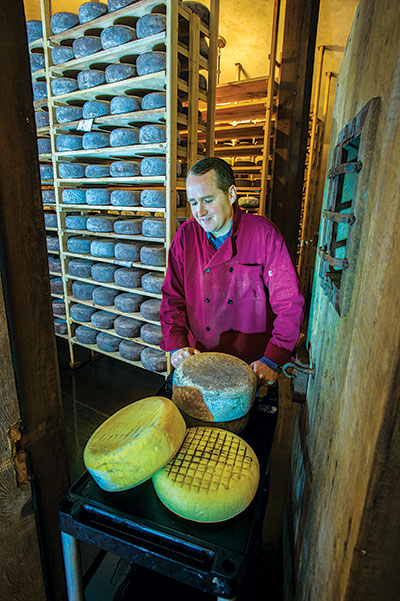 Five miles north of Waco, Homestead Heritage Crafts Village showcases the traditional craftsmanship of the Brazos de Dios agrarian community. Homestead provides demonstrations and teaches classes for the handcrafted goods it makes on site—ranging from furniture to pottery, soaps, and weavings—but its Brazos Valley Cheese has become one of its most popular products. I became a fan before ever visiting the 510-acre farm, as Brazos Valley cheeses are among the best available at upscale restaurants in Texas big cities, as well as at specialty grocery stores and farmers markets.

Head cheesemaker Marc Kuehl leads me on a tour, showing how Brazos Valley’s 17 cheeses are made in its 50-, 125-, and 400-gallon vats with all-natural, raw milk sourced from area dairies. Brazos Valley uses about 2,250 gallons of milk per week to produce about 2,000 pounds of cheese. Kuehl shows me how the whey is drained and curds are cut, and explains the techniques used to create cheese varieties, including using pecan shells to smoke gouda in the restored 1860s smokehouse. One of my favorites is Brazos Valley’s “Eden,” a Brie wheel wrapped in fig leaves that, when cut, exposes a line of vegetable ash through the center.

We walk through the underground “cave,” 17 feet below ground, where towers of shelves hold some 1,300 wheels of everything from pepperjack to horseradish-pecan-cheddar, blueberry Havarti, and a specialty cheese called “Van Sormon,” which is rubbed with vanilla, sorghum, and cinnamon. Lunch at the farm’s busy Cafe Homestead includes a five-selection cheese plate that caps my visit, but I don’t dare leave without a stash of cheeses from the cheese shop.

Paula Lambert’s moxie in starting a humble cheesemaking outfit near downtown Dallas 32 years ago seemed like folly to some, but history has more than proven her wisdom. Travels in Europe enticed Lambert to try making and marketing artisan cheeses, and it was in Europe that she learned her skills; no classes were offered stateside back then. Beginning with ricotta and mozzarella—still two of her biggest sellers—Lambert found Dallas chefs to be her best customers. Once Wolfgang Puck, the high-profile consulting chef at the Mansion on Turtle Creek, endorsed her work, Lambert had the little cheese shop that could.

Word spread, and chefs across the state began using Mozzarella Company products, often listing them on menus as “Paula’s ancho chile caciotta,” and so forth. By 2012, her line had grown to 30 cheeses, including cow- and goat-milk varieties. All are offered in the retail shop at Mozzarella Company’s Deep Ellum factory, and numerous varieties sell at stores like Whole Foods Market, Tom Thumb, and Central Market, as well as at dozens of specialty shops.

When I visit, I find a tour group of 25 people in hairnets learning to make three kinds of mozzarella and a ricotta, which are fresh cheeses that don’t require aging. Lambert and several of her employees demonstrate the curd-making process before everyone rolls up their sleeves to knead and stretch the cheese, adding hot water to make a smooth, supple consistency. After about 90 minutes, the cheese is done and the group enjoys tastings of wine and cheese.

Lambert offers monthly cheesemaking classes (which include tours), along with seated tastings that include wine or beer pairings. Private bookings are among the most popular events at the Mozzarella Company, as well. Anyone dropping in can taste the cheeses sold at the retail shop, and they can buy Lambert’s two cookbooks, too.

Arriving in Longview, I find Haute Goat Creamery producing delicious goat cheese in a former sandwich shop. Lifelong foodie Laura Vanderbilt found her calling in 2008, when she took cheesemaking classes and purchased the necessary commercial equipment. By 2012, Haute Goat had developed such demand for its cheese that Laura’s husband, Jeff, retired from his job as an organic chemist to make cheese. The two show me around their small operation, where they take delivery two times each week of fresh goat milk from a nearby farm and where they add cheese cultures and enzymes. Proudly showing me their wooden Dutch cheese presses, they demonstrate how cheeses are made into five- and ten-pound wheels. Some of the whey that’s drained out during curd-making goes back to feed their supplier’s goats, adding to the sustainability of the process.

Producing some 150 to 200 pounds of goat cheese weekly, Haute Goat’s boutique inventory includes a creation they call “manchegoat,” after the aged cheese’s similarity to Manchego, an enormously popular Spanish variety; Romano; a Swiss-style cheese; feta; a style similar to French Comté; and blue cheese. Treated to a tasting, I roll my eyes in pleasure over the chèvre topped with sundried tomato and caramelized onion. I also find favorites in the Pauli Girl, which is washed with St. Pauli Girl beer, and the Salty Dog, similar to the popular tangy Welsh cheese called Caerphilly. Before I leave, I pack a supply of cheeses from the retail shop, and I take a handy guide for pairing beer and wine with Haute Goat cheeses once I’m home again.

With all the cheeses I’ve amassed, I’ll need to have more than a few parties to share my new discoveries with friends. Watching the cheesemaking process first-hand enhances my enjoyment of the products—and gives me fresh cocktail party chat material, too.