The confines and comforts of family camping

The trouble with the traditional American school calendar is that it conditions you to believe that summers should be spent on vacation. 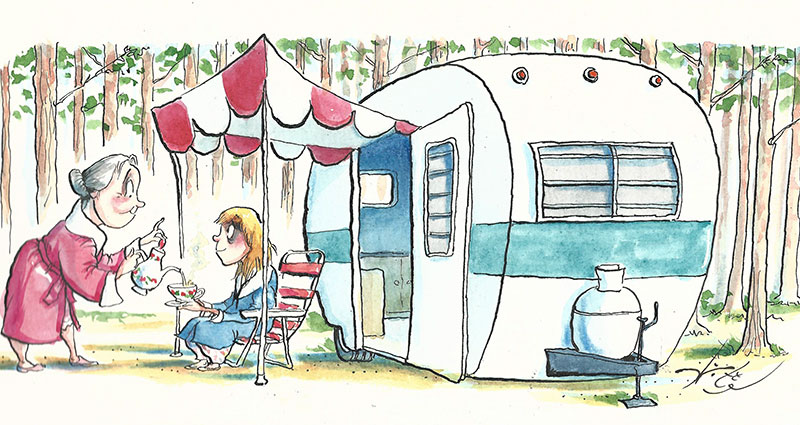 All three months of summer. I assume some people shake this feeling a few years after graduation. I’m still working on it. To this day, as soon as I pick my son up from his last school day, I feel like hitting the road and staying on the move until Labor Day.

Not every day of summer was spent traveling when I was growing up, but most weekends the family hit the road. But the treasured nut of summer was the weeks we spent camping somewhere far from home.

That is, until the summer I turned 13.

Up until that summer I had loved traveling with the family on any vacation that involved a campsite. And for a family of seven, that meant virtually every vacation. I can count on one hand the number of nights I slept in a hotel as a kid. Vacation meant sleeping in a tent surrounded by brothers. But then my three oldest siblings peeled off to lives of their own and our vacations got an upgrade. The purchase of a travel trailer the summer I became a teenager made me feel like I’d won the lottery. It was the only thing that kept my head from exploding at the idea of spending two full weeks with my little brother and parents. Beds with sheets, a kitchen stove, a bathroom that didn’t involve a walk through the woods in the middle of the night (not to mention spiders), sounded swanky.

But despite my initial joy at the trailer acquisition, it soon occurred to me that vacation would now mean two weeks in closequarters with the family. I began to dread all the interruptions to my alone time.

It soon occurred to me that vacation would now mean two weeks in close quarters with the family.

By the time we drove into the East Texas forest I understood that if it rained while we were there, my week would feel roughly equivalent to doing hard time in a high security lockdown. Not that the sunny days would be better. Fine weather meant us being dragged out of bed before the sun was up. We’d sleep walk to the dock to help launch the boat.

I didn’t want to fish the summer we went to Lone Star Lake. I wanted to go to the swimming beach where there was a pontoon float and diving platform and boys. The first time I swam out and pulled up onto the pontoon I heard a boy say, “Lord, Dwayne, look what’s come up over there.” I felt like Raquel Welch in One Million Years B.C. Never mind that I was in the 8th grade and that my bathing suit that year was a turtle neck one-piece so prim that Sister Martinella wanted to know where I’d gotten it. I was such a geek I thought it was cool that a nun coveted my swimsuit.

That dock, those boys, that summer I knew that I was done with hanging out with the family. I wanted absolutely nothing to do with any of them.

Right up until I had an asthma attack.

As a young child I had asthma serious enough to require hospitalization many times. After a series of allergy shots the debilitating attacks had become far and few between. But that summer when I decided that I no longer needed a mother, that my brother was a waste of space, and my dad was annoying, I had a humdinger of an attack. The scary kind.

Never did a small space feel so comforting. Mom, who knew I was in distress even before I did, was at my side with my medicine before I was awake enough to panic. Then she made me a cup of tea. As she encouraged me to inhale the steam and relax, she whispered soothing sentiments. When I was breathing easy again, she curled up next to me on the bed that a few hours before had been the dining table. Remembering how I had intentionally ignored her attempts at conversation during dinner, I tried not to cry.

Suddenly my brother shouted out from a dream, “Score play on Barb!” It was his most annoying cry of one-upsmanship, but this time it made me laugh. Mom laughed, too. And, in that moment, I felt the comfort of family as I never had before.

I turned 13 a few weeks later and I got less and less keen on giving up time with my girlfriends for Piney Woods escapades with my parents. It was years before I wanted to camp again. But I never forgot the magic of those wee hours when that little capsule of family far from home became the safest, most comforting spot on earth.