We All Live in Uncertain Now 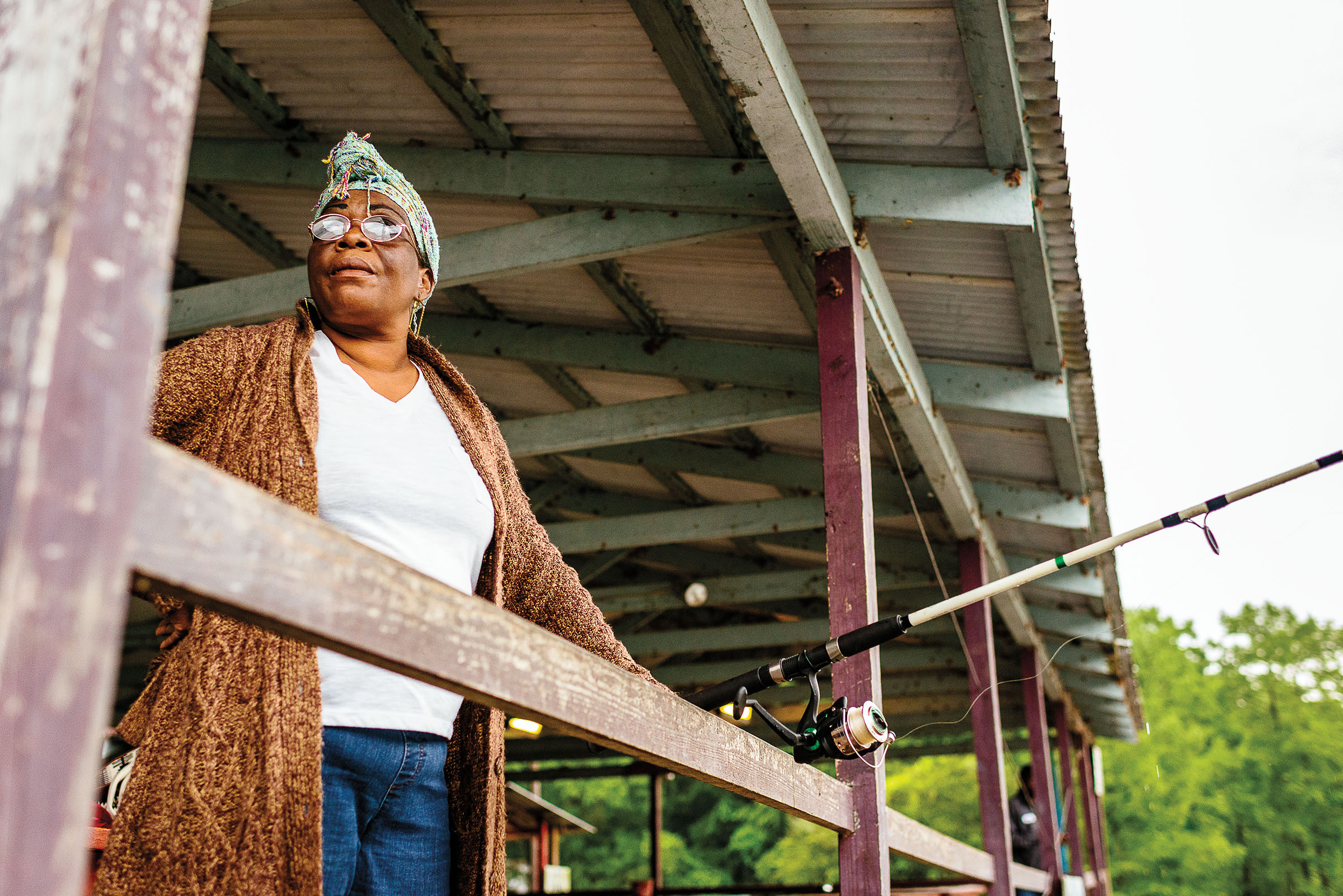 Fishing is a way of life on Caddo Lake, where largemouth bass and crappie are popular catches.

“Think of Caddo as a maze of lakes within lakes,” says John Winn, proprietor of Caddo Outback Tours, as the two of us settle into a small Go-Devil boat roped to a dock in Uncertain, on the border of northern Louisiana. For two decades, Winn has given tours of this lake, named for the Caddo tribe who settled in the area in the late 18th century, and he’s had to retrieve a number of people lost in the labyrinth of bayous, ponds, and narrow channels. “Boy, are they glad to see me,” he says, tugging his gray beard. I ask what could get them. “Nothing,” he says. But floating in the unknown spooks a person. Around 60 species of reptiles live in the swamp, and the night grows noisy with the screech and swish. Gators lurk in these waters. They won’t attack, but when the light of the boat shines on them, their marble eyes turn red, like taillights rising from the swamp.

The name is what drew me to Uncertain. It sounds like a thick novel, or one of those creepy noir films from the Coen brothers, but in the months since COVID-19 began dismantling the life we once knew, it has become a global condition. What will become of us? Who should we be? We are all living in Uncertain now. Of course, the 2018 census placed the town’s population a bit lower, at 59.

It was a few days before Memorial Day, as Texas continued to creak open its doors after weeks of sheltering in place, and I was looking to escape but not flee caution. I’d visited Uncertain years ago, and I fell in love with a landscape that was peaceful and otherworldly, with many purported Bigfoot sightings in the area. I remember how I walked under the canopy of tall, thin cypress trees, gesturing as I told them my troubles; and while the trees were indifferent, they were also a bit kind. Spanish moss draping from the trees wafted in the breeze. In French Polynesia, they call Spanish moss “grandpa’s beard,” but to me the stuff looked like Ophelia’s hair, or the gauzy fabrics Stevie Nicks wore in her “Gypsy” phase. The trees were witchy like that—haunted maidens who never give away their secrets. Nobody knows for certain how Uncertain got its name, which seems exactly right. 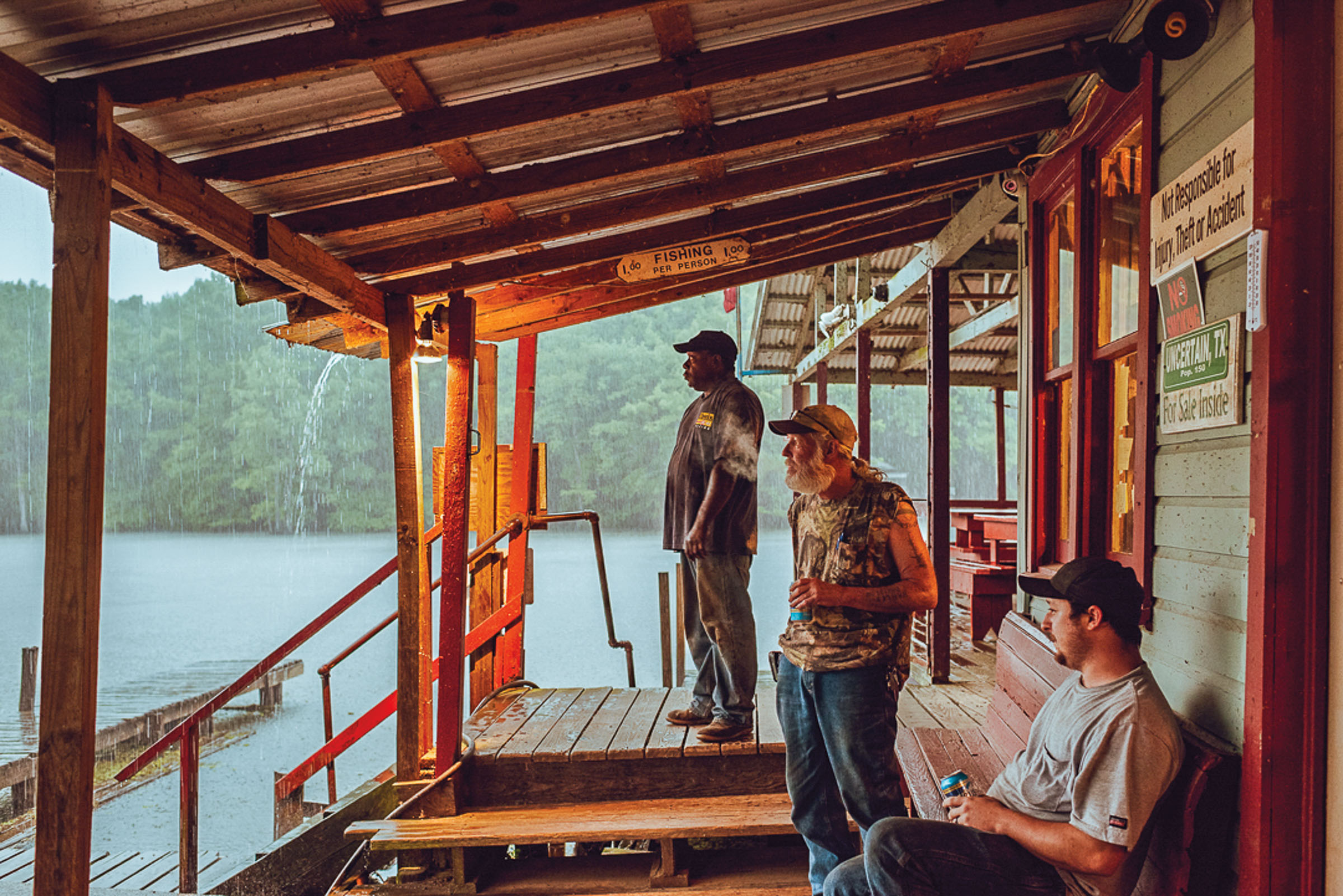 On a late Thursday morning, I sling my beat-up green suitcase into the trunk of my car and head east from my home in Dallas, two-and-a-half hours along Interstate 20 and into the Piney Woods of East Texas. The next 30 minutes take me along state and farm roads where my cell signal starts to disappear. I’m heading into the kind of rural emptiness where you double-check the gas level and rearview mirror. I’m outdoorsy enough to find all of this achingly romantic, but my less generous city friends might call it serial killer country.

“Uncertain is not on the way to anywhere,” says Sheriff Tom McCool of Harrison County in a 2017 documentary titled Uncertain. “You’ve got to either know where you’re going or be lost to find it.” The evocative film is a portrait of men lost in a more existential way (stream it on Amazon and Vimeo), though it barely scratches the surface of a town whose mysteries run deep. The fact that Netflix has not greenlighted a narrative series about Uncertain is evidence that even the golden age of television has blind spots, and that I should be hired by Netflix.

Uncertain is one of those places where every passing stranger feels like a character. The tiny woman with white hair and bright eyes who shows up on the porch of my cabin, dangling a cigarette, to collect money for my stay (cash preferred). The man with the mustache at the small grocery store buying a vial of pickle juice to pour into his beer (a new trend). The middle-aged couple outside a bar and grill called Lighthouse engaging in a friendly debate about whether a shirt bought at a Guns N’ Roses concert should be worn after the concert (or does it lose value?).

Inside the Lighthouse, it’s the first day back in business after lockdown, and things are a bit weird. A handwritten sign outside the door lists rules that include no sitting at the bar and no switching tables. “Dancing is discouraged,” reads one, sounding more like the Bible Belt laws that inspired the classic ’80s movie Footloose than the rules of a town that still allows smoking indoors. The wood-paneled, neon-lit bar is just starting to fill at 6 p.m., and the vibe is jokey but compliant. People squirt hand sanitizer into their palms as they enter. A woman sways near the jukebox, one arm outstretched like she’s holding an imaginary partner. “This is my social distancing dance,” she says.

Rules are a tough fit for a part of the state accustomed to being left alone. Winn told me in advance of my 90-minute boat tour that he only takes cash or check. “You know they aren’t taking cash in Dallas at all these days,” I told him, and he chuckled—a smoker’s laugh. “Isn’t that something?” he said. “The world’s gettin’ crazy.” 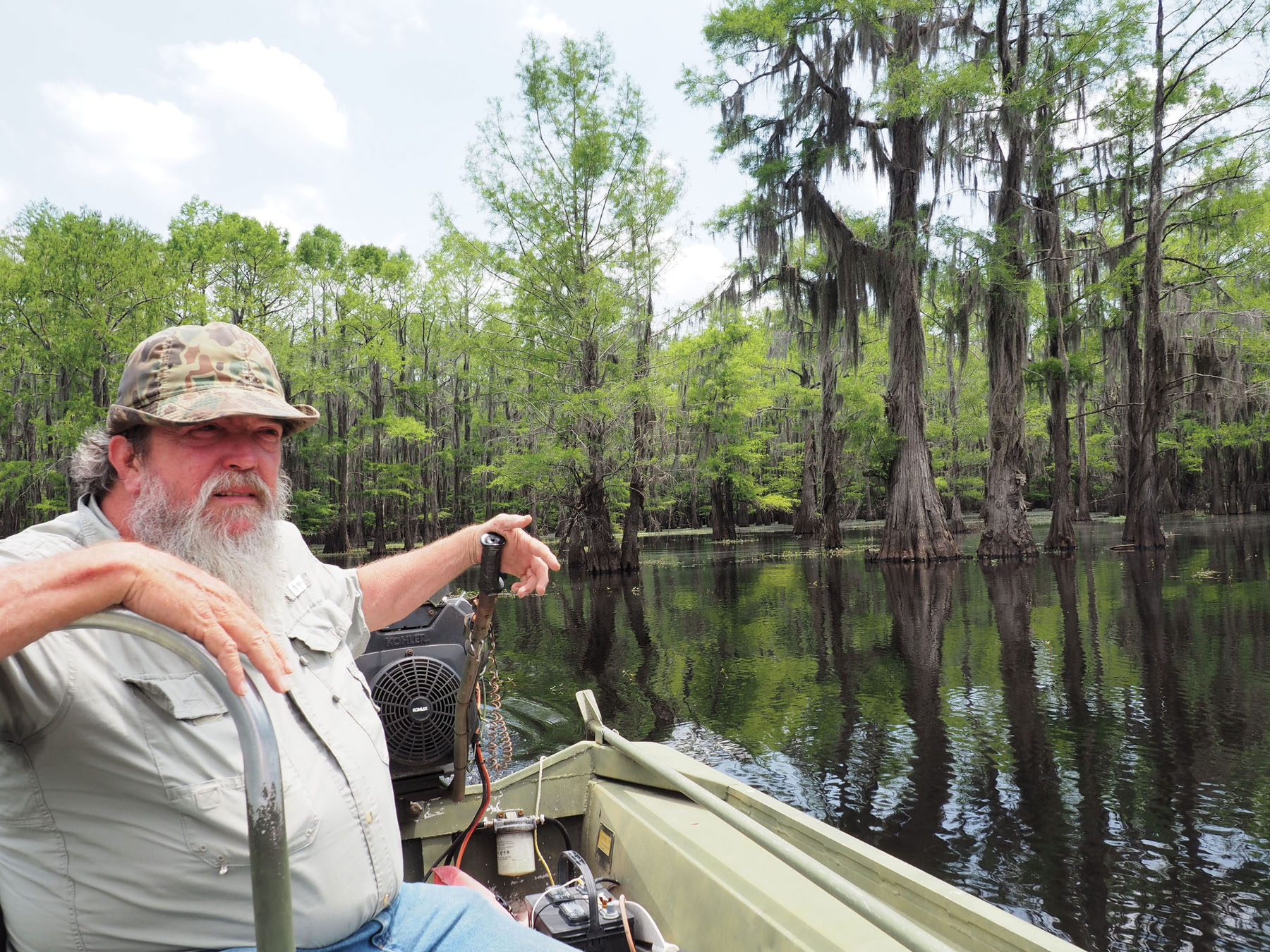 Out on Caddo Lake, Winn revs the motor of his Go-Devil and we head into the maze, which at nearly 27,000 acres is one of the state’s largest lakes. I have a mask in my backpack, but we sit so far apart that the precaution seems moot.

“Most of the folks around here are seasonal,” Winn tells me as we pass holiday boaters and a woman kayaking with a toy dog in her lap. Winn is part of the year-round crew. He grew up in Uncertain, born to a mother who left and a father who drank (“a happy alcoholic,” he says). He taught himself to fish and dropped out of school in ninth grade. “Caddo raised me,” he says. “Caddo fed me.” He is something of a swamp creature, a peculiar breed adapted to this remote spot that is not quite Cajun country and not quite Lone Star State—a land lost in time.

He navigates the boat through a shallow channel, and we emerge into a part of the lake that is empty, gorgeous, eerily silent. For years, Caddo has been fighting the invasion of an aggressive giant salvinia plant kept in check with herbicides and weevils, a joint effort of the Texas Parks & Wildlife Department, scientists, and rock star Don Henley, among others. The waterways are clear today, though it’s impossible to know how long Mother Nature can be tamed. Winn tells me he spent the past few months at home gardening with his wife. They own 9 acres about a mile from the lake. The only part of his job he never liked was the phone ringing constantly, but worse was the phone not ringing at all. A silent phone is scary for a small-business owner, but with sanctions continuing to lift across the state, the phone is annoying him again. “People are champing at the bit,” he tells me.

We float into a passage where trees rise up from the water all around us, and he threads the boat like an obstacle course. Winn guesses the trees are somewhere between 100 and 250 years old, and I’m reminded of a passage I read in Walt Whitman’s journal. “How strong, vital, enduring! how dumbly eloquent!” Whitman wrote of the woods where he recuperated from a stroke at 54. “The qualities, almost emotional, palpably artistic, heroic, of a tree; so innocent and harmless, yet so savage. It is, yet says nothing.” The poet who first declared that he contained multitudes was a master of contradiction, and this place, like our moment, had plenty to consider.

Nature can harm us, but nature can heal us. Winn once took a woman on the lake who worked in the wellness industry, and she pointed out the minerals in the plants and water, a muddy brown from tannins in the trees. “You should open a spa,” I tell Winn. He jiggles his belly with his hand and asks, “Would you go to a spa run by this man?” He likes to watch newcomers discover this strange world. City folk often mistake the motion blur of an egret through the trees for a car, which tells you something about conditioning. We see what we know. Winn gives tours at night, too, and he loves when people really see the sky. “Stars,” a man said to him. “We only have two of those at home.” 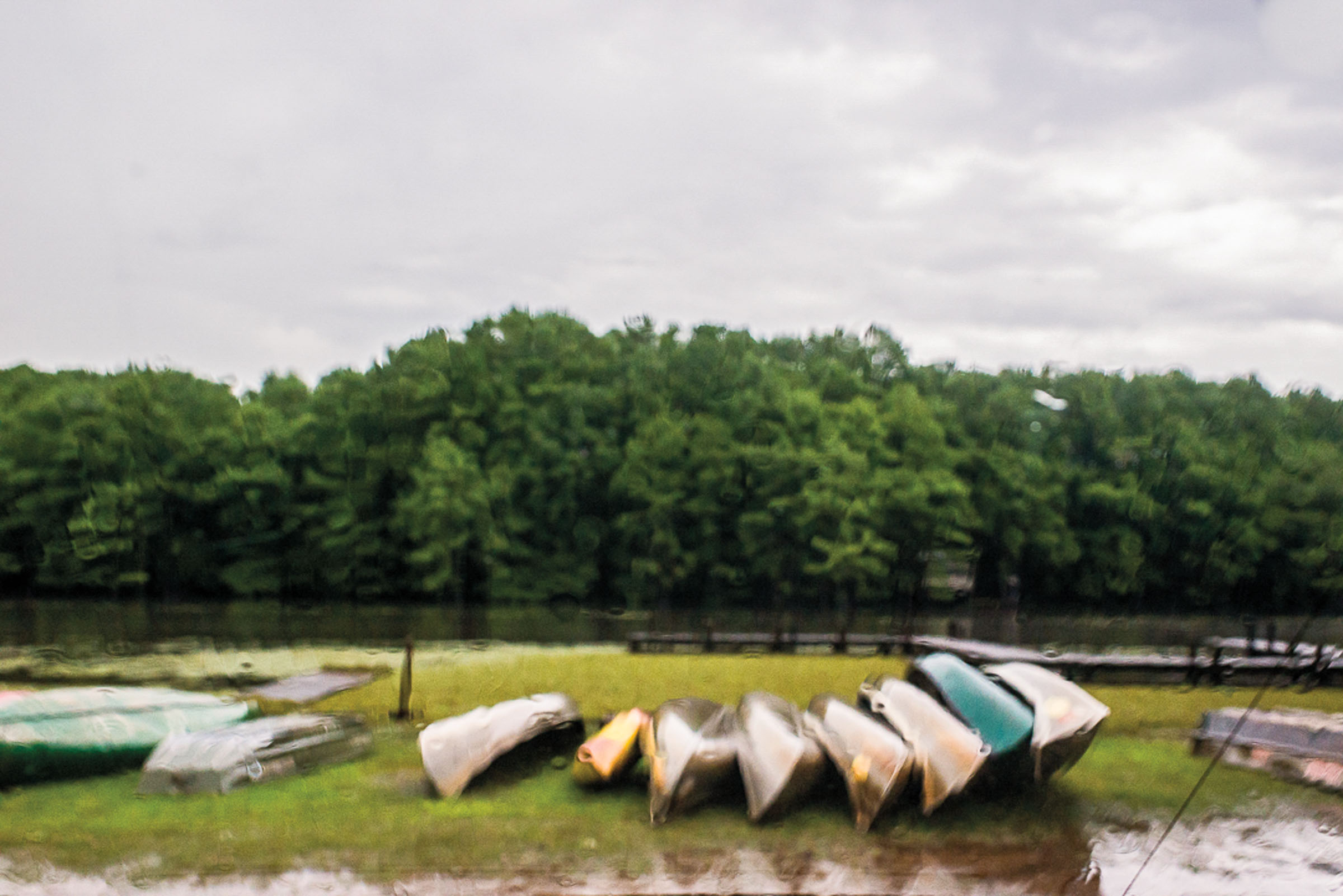 I like it here. Something about disappearing into the middle of nowhere makes me feel centered. Something about floating on the water connects me to the earth, which can feel so far away in the cement wonderland of North Texas. Winn steers the boat into the dock again, and I step onto the wooden beams, readjusting to the solid ground.

“Do you shake hands?” he asks. “I never know anymore, but it seems most people around here, they wanna shake hands.” I smile and slide my palm into his, though I drive away wondering if that was a mistake, and head back to my cabin for one more night in Uncertain.