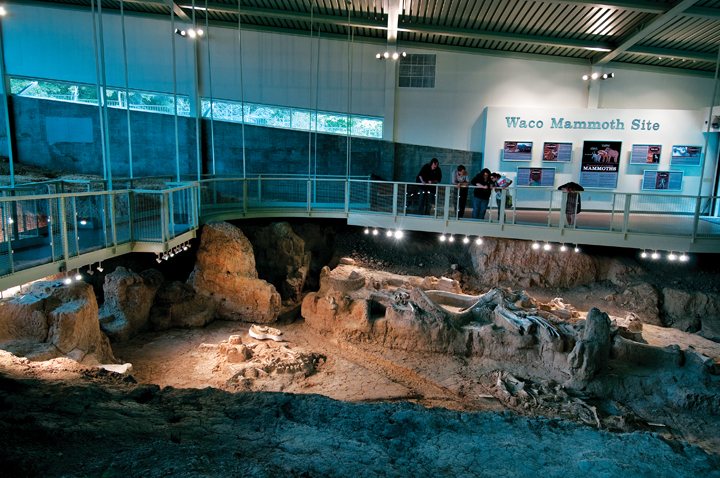 I’ve always been fascinated with Waco. It’s a convenient mid-point between Dallas and Austin, and I stop whenever possible to take in some of its colorful history. One of my favorite Texas structures is the 1870 Waco Suspension Bridge, the first bridge to span the Brazos River.

And I can’t resist downtown’s Dr Pepper Museum, the birthplace of my hubby’s favorite soda pop. But until recently, I didn’t realize just how historic Waco really is.

This past December, the Central Texas city debuted its own Jurassic Park of sorts: the Waco Mammoth Site, a wooded, 105-acre work-in-progress along the Bosque River northwest of town. Phase I of the archeological attraction exhibits the remains of six prehistoric mammoths—distant cousins of today’s elephant.

In 1978, Eddie Bufkin and Paul Barron were looking for arrowheads in ravines along the river when they made a discovery that set the project in motion. “The men came across a large bone sticking out of the ground,” says Waco Parks and Recreation Department program administrator Jeff Goodman. “They knew it wasn’t a cow bone, so they took it to scientists at Baylor [University] for further investigation.”

Paleontologists at Baylor (and later at the University of Utah) determined that the bones were from skeletons of Columbian mammoths that grazed the lush Central Texas woodlands before becoming extinct about 10,000 years ago. Distant relatives of the woolly mammoths, the Columbian mammoths, on average, stood 14 feet tall, weighed some 20,000 pounds (8,000 pounds more than the typical woolly), and had broad, curved tusks that stretched 15 feet or more.

Scientists later identified most of the remains as those of the largest nursery herd of Columbian mammoths ever found in North America. Even more intriguing, the site was found to be the final resting place of at least two other, subsequent groups of these Pleistocene creatures. More than 25 mammoth specimens were uncovered between 1978 and 2001, as well as the tooth of a juvenile saber-tooth cat and the remains of a prehistoric camel and another still-unidentified mammal. Evidence indicates that the creatures were victims of a series of cataclysmic natural disasters that occurred approximately 68,000 years ago.

The site’s just-completed Phase I features a visitors center, an oak-shaded park, and a stunning, 8,350-square-foot Dig Shelter—a steel-glass-and-wood marvel constructed around and over the original dig. The structure preserves the animal remains while removing moisture from the air and ground and sealing the interior. The vaulted interior includes explanatory displays, viewing
platforms, and a truss-supported crosswalk that looks directly into the dig.

“There’s a reverence here … you feel it when you walk in,” says Jeff Goodman. “We usually allow visitors a few minutes just to take in the scene before we explain precisely what they’re seeing.”

Entering the shelter, I understand what Goodman means. Flooded with sunlight from large windows, the building feels like sacred ground. I find myself unwittingly holding my breath inside the hushed environs. Pointing to the remains of the six mammoths lying in situ, beneath the Dig Shelter, tour guide Troy Gray says, “The remains you see here are exactly where they’ve been lying all this time. The bull in the center was found holding a juvenile in his tusks as if he were trying to raise it high above danger. Bull mammoths typically had very little contact with a nursery herd—they only returned during mating season. But he was found with them. Scientists hypothesize that this death event was caused by a flood.”

He explains that the other animals, including a female who was also found with a juvenile in her tusks, were found clustered just outside the Dig Shelter; their remains are currently in museum storage facilities.

Gray’s revelation makes the mammoths’ plight seem eerily human, documented as it is in dirt and bones. The scene tells of the adults’ attempts to save their young during a natural disaster. It’s an incredibly poignant display that leaves visitors reflecting on how much we might share with our distant mammalian relatives.

Currently operated by the City of Waco, Baylor University, and the Waco Mammoth Foundation, this impressive site appears on track to become a national monument under the auspices of the National Park Service. (The U.S. House of Representatives green-lighted legislation for such a designation in July 2009. At press time, a similar bill was awaiting floor action in the U.S. Senate.) Already, the park is a star attraction for school groups from first-graders to college students, armchair archeologists, and paleontologists from around the country. “We just opened in December, and we’re averaging 4,000 visitors a month,” says Program Coordinator Anna Enderli. “We’re anticipating a busy summer.”

Enderli says future plans include construction of a playground near the Dig Shelter with playscapes designed after mammals found at the dig, classroom buildings and research facilities, nature trails, and piers overlooking the Bosque River. As funding allows, the site will eventually display more remains from the Central Texas dig, offering visitors an even broader glimpse of prehistory.