What’s New (and Old) in Fort Worth?

In Fort Worth, new development meshes with a city core that stretches back more than a century 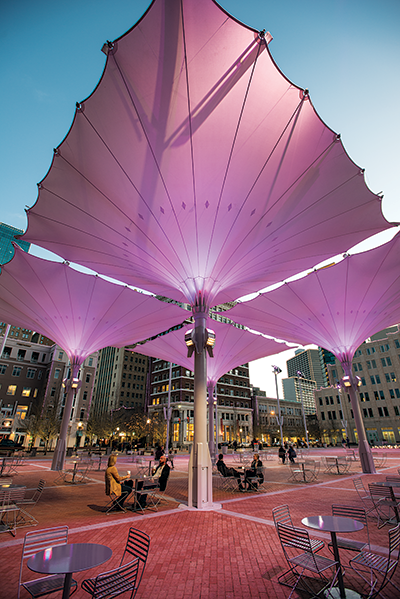 In Fort Worth, savvy planners, designers, engineers, and others have stitched together new development, reinvented neighborhoods, and a refurbished city core into an architectural fabric that stretches back more than a century.

Indeed, I recently visited Fort Worth to experience the new—particularly the revitalized Sundance Square Plaza and the highly anticipated Renzo Piano Pavilion at the Kimbell Art Museum—but ended up discovering so much more. Fortified with lunch (short ribs and a glass of Pedernales Cellars viognier from Stonewall) at the snazzy new Little Red Wasp, I set out on foot for Sundance Square, a loosely defined, 35-square-block area smack in the middle of downtown.

“We are not interested in drawing a border for Sundance Square,” Johnny Campbell, president of Sundance Square, told me later. “But we are interested in being a catalyst for downtown.” I asked him about the name Sundance Square, and that was a bit easier to nail down. Turns out that the Sundance Kid (legendary outlaw Harry Alonzo Longabaugh) is said to have hung out in the saloons that enlivened these city streets during the late 19th Century. He allegedly got himself arrested here, although Campbell and everyone I ask stumble over exactly where, and for which of his many crimes. Today, the Sundance Kid might be surprised that his brand of Western lifestyle has been supplanted by shopping, concert-going, dining, and Saturday strolling for young families. He might dine at some of the restaurants here offering lusty menu choices for meat-eaters (Del Frisco’s Grille, Mercury Chop House, and Riscky’s Barbecue are within earshot of each other), but I’m doubtful he would belly up to the sleek bar at GRACE and order from the craft cocktail list. As for me, I put that tempting notion on ice until later.

My afternoon agenda starts in the spacious, brick-lined Sundance Square Plaza, where I’m greeted by a larger-than-life Longhorn mural painted a few decades ago by New York artist Richard Haas. The mural, which decorates one side of the 1902 Jett Building, pays homage to the historic Chisholm Trail; in the 1870s cowboys drove herds along this route from Texas to railroads in Kansas. They stopped in Fort Worth to load up on provisions and, with the herds corralled in the stockyards north of downtown, spent part of their pay on booze and brothels. Looking around, I find more reminders of their legacy in the Jett Building’s neon cowboy sign for radio station 95.9-FM The Ranch; at Leddy’s Ranch at Sundance, where wannabe cowboys can gear up with boots and other Western wear; and at the compact Sid Richardson Museum, which features works by Frederic Remington, Charles Russell, and other artists who depicted the American West when it was wild.

Today, the Sundance Kid might be surprised that his brand of western lifestyle has been supplanted by shopping, concert-going, dining and Saturday strolling for young families.

Sundance Square Plaza—now wired for sound, lighting, and live performance of many kinds—has a permanent stage attached to the new Art Deco-style Westbrook office building, but it’s so cleverly tucked into the streetscape you’d swear it had been here all along. With no singers, dancers, or actors on the immediate entertainment schedule, I note Scat Jazz Lounge, down a nearby alley, as a late-night possibility. For now, the visual aesthetics have my attention: Four giant umbrellas, technologically weather-sensitive and adjustable in both color and position to protect against sun or rain, also function as public sculpture. Opposite, a water feature with more than 200 vertical jets can be programmed for various patterns and lighting schemes, a welcome run-through on hot days.

All this splashy newness blends ever so gently with previous-era pedestrian-scaled storefronts—some reborn with total makeovers and a few carrying on as they have in decades past. Pleased that Fort Worth is both a little different and a model of sorts, Campbell says, “Other urban planners come here and are surprised to see what we’ve done.”

And haven’t done: Low-rise buildings characterized the streetscape in the 1800s, and still do today. How refreshing that what goes around, comes back around (if slyly sometimes)—such as the Red Goose Saloon, once the home of Red Goose children’s shoes, still sporting a neon “Juvenile Shoe Store” sign out front. The turrets and fancy brickwork adorning the 1901 Knights of Pythias Castle Hall, now home to Haltom’s Jewelers, gleam like they did more than a century ago. (A tip: Look for the armored knight peering from the fourth-floor attic window.) And then some businesses haven’t changed at all—notably Peters Bros. Hats, where the fifth-generation owners will fit you with a custom-made, beaver-fur cowboy hat.

Nearby, Montgomery Ward’s 1928 Mission Revival-style building—once the largest building in Texas—now anchors the West 7th District, a shopping, dining, and residential corridor between downtown and the Cultural District. With a name change to Montgomery Plaza, the building’s transformation sparked a parade of restaurants, shops, entertainment venues, and condos.

The street verve of the compact West 7th District invites walking and biking (and there’s a new Bike Share program for the latter), though on this day I drive the half-mile or so to the Cultural District, where I spend the day museum hopping. 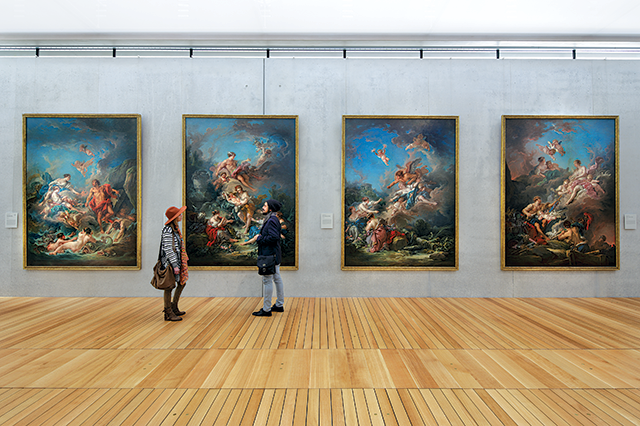 Critics and art-lovers tend to admire Fort Worth’s three major art museums as much for their architecture, all by high-profile architects, as for the artworks they house. Philip Johnson designed the Amon Carter Museum of American Art, calling it the building of his career; Tadao Ando, the Modern Art Museum of Fort Worth (one of his few designs in the United States); and Louis Kahn, the Kimbell Art Museum (generally considered to have the finest light of any museum anywhere for viewing art).

Before Renzo Piano’s new building at the Kimbell, the museum had run out of space to show much of its permanent collection while hosting special exhibitions. Piano’s new building provides that needed space and more. Altogether, the Piano Pavilion’s three spacious galleries provide more than 16,000 square feet of additional space for viewing art, plus classrooms, meeting spaces, and a concert hall with almost 300 bright red seats.

Everyone involved in the process—from the Kimbell’s board and staff to Renzo Piano and his team of designers, engineers, and builders—had extraordinary reverence and respect for the original Kahn building. What they made together—65 feet opposite the Kahn, across a great, green lawn—is a building that converses with it. The Piano Pavilion orients—or reorients—visitors to the front entrance of the Kahn. For years, because of proximity to parking, the back door had become the main entrance, and many visitors never saw the reflecting pools, heard the soothing cascade of water, or walked through the grove of trees at the front as Kahn intended. Now that visitors can park underground, staircases lead directly to the midst of all that. In fact, on opening day this past November, Piano said plainly, “The Kahn Building is one of the buildings I like most in my life.”

Off I go to see the results of this collaboration with Onur Teke, a member of the Piano team who was on site as the smooth, blue-gray concrete walls were poured, the 100-foot Douglas fir ceiling beams installed, and the oak floor laid. We walk through the Asian collection—mostly sculpture and precious pottery—installed in its new home. We pause at the four 18th-Century paintings depicting Roman mythology by François Boucher, now hung side-by-side, an orientation not possible previously due to space constraints. As I look around in wonder, Teke doesn’t need to point out the advantageous use of glass throughout: Transparent walls and roof panels allow filtered natural light to illuminate the art and the building itself but also tie them to the outdoors. And a sidewalk in front of the low-slung building invitingly connects to streets on either side of the campus.

Later, I walk to the Modern Art Museum and loop through a traveling exhibit of works from Mexico City before a fabulous quick lunch at the museum’s Cafe Modern, which overlooks the museum’s reflecting pond. Then it’s up the hill to the Amon Carter. Before going in to view a show of 1930s Texas Regionalism (here through April), I turn to face a vista of downtown Fort Worth. And I think about the words of architect Renzo Piano himself: “Art makes people better people. A building for art makes a city a better place to live.”