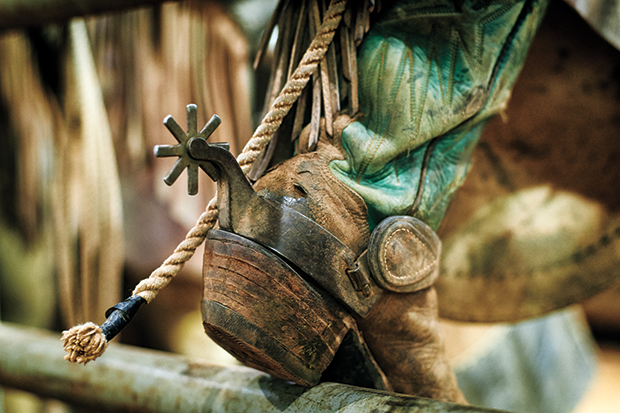 Red sand flies across the arena as ranch cowboys show off the skills of their horses, which have colorful names like Loretta Lynn, Snake, Purr Cat, and Brandin’ Crew.

Each cowboy rides his horse hard, then pulls back the reins to stop abruptly. Next, each rider backs up his horse, rides in one direction and then another, making the shape of a figure eight. In a final display of agility and versatility, each horse chases down a calf so the cowboy, still in the saddle, can rope it. Applause and shouts echo in the stands from the fans at Wichita Falls’ Multi-Purpose Event Center, many of whom are wearing cowboy hats themselves. 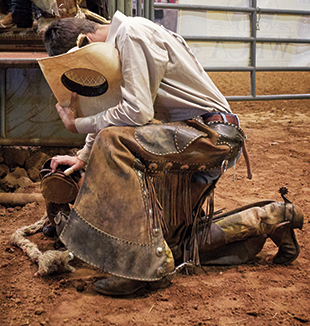 This “top horse” competition tests American Quarter Horses and their riders on skills they’d need if they were working on a ranch, especially smoothness of movement and quickness of response. It’s just one of the events at the Texas Ranch Roundup, held each August in Wichita Falls to simulate events at the cattle roundups of the late 1800s and early 1900s. This year’s roundup runs Aug. 18 -19.

I had never seen the Texas Ranch Roundup, billed as the “granddaddy of ’em all,” the original ranch rodeo. So my husband and I drove to Wichita Falls from our home near Glen Rose last August to watch working cowboys and cowgirls from some of Texas’ most historic ranches compete for the all-around title. 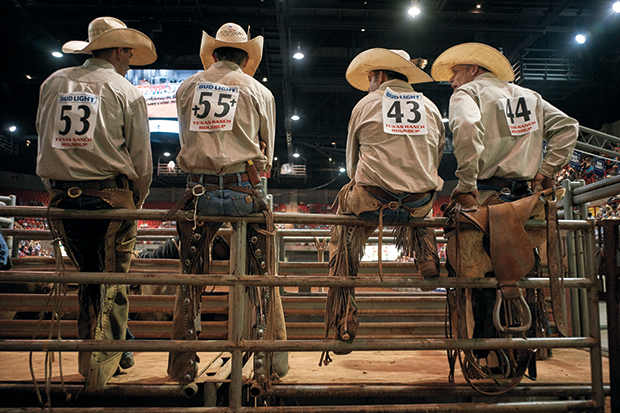 David Welch, who serves on North Texas Rehab’s board of directors, attended the first roundup events more than 30 years ago. “I love these ranches and the history behind them,” Welch says. After all, the Texas Ranch Roundup isn’t just about sport. It reflects the day-to-day lives of working cowboys at 10 Texas ranches selected to participate because of their rich, long histories.

Don’t expect to see rodeo events such as bull riding or steer wrestling at this roundup, however, because those skills didn’t originate on working ranches. Instead, the roundup’s competitive events reflect activities that routinely take place at ranches, such as calf doctoring, bronc riding, wild cow milking, team penning, and branding. As last year’s program notes, “Precision and care take years to learn on the range.”

Mark Voss, team captain of the Swenson Land & Cattle Co., which this year is defending its title as the overall winning team in 2016, said the ranch was proud to win the title. “We’re not really bragging,” he adds. “We’re happy to be lucky enough to win.”

The team represents one of Texas’ oldest ranches. Swenson Land & Cattle dates to 1854, when S.M. Swenson—the first Swedish immigrant to Texas, according to the Texas State Historical Association—began buying land in West Texas and around Austin. Swenson eventually became one of the largest landowners in Texas with several ranches spread around West Texas. The town of Stamford became the ranch headquarters, and in 1930 Swenson helped found the first Texas Cowboy Reunion, which is now an annual tradition in Stamford. Today, the family ranch is owned by Swenson’s great-grandsons.

Voss said he particularly likes calf doctoring, team penning, and calf branding because they represent authentic ranch work and show the cowboys’ and cowgirls’ roping skills. “The roundup is a place where people can see ranch traditions and the day-to-day operations,” Voss says. “They get a sense of how family-oriented these ranches are. The wives at the ranches all participate. The children get involved.” 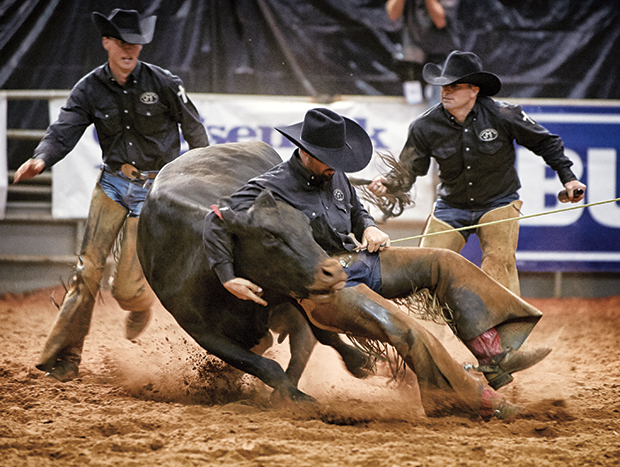 Missy Bonds, daughter of Pete and Jo Bonds of the Bonds Ranch in Saginaw, which dates to 1933, says the roundup shows “how much these ranches focus on family. These ranch employees may not be family by blood, but they are all family just because they are part of the ranch.”

The roundup certainly is a family affair at the Bonds Ranch, the 2016 second-place overall winner. The ranch has adapted to changes in the ranching industry but still does some chores the traditional way. Ranch hands still build a fire for branding cattle, but the ranch also uses electronic ID tags and computers to keep track of its herds.

Bonds family members also still manage the ranch, and Pete and Jo and their three daughters all participate in the roundup. Missy competed in the team penning and team branding events last year, while her sisters Bonnie and April headed up the chuckwagon cooking competition. “Daddy likes to cook the beans,” Missy adds.

On the Chisholm Trail in the late 1800s, a good chuckwagon cook became a necessity, even “a matter of life and death,” the roundup program notes. “On a long trail with hardworkin’ hungry ‘brush poppers’ (cowboys), a chuckwagon cook’s very life depended on his fixin’ a meal that would satisfy the men of his cattle drive outfit.”

Cooking a good chuckwagon meal may no longer be a life-or-death skill, but it’s still much appreciated during roundups and other times when lots of hands are working hard and needing fuel. At the roundup, the chuckwagon competition’s theme changes each year, but it always involves rustling up hearty ranch fare using old-fashioned equipment and methods such as Dutch ovens, cast-iron pans, and open-flame fires. In 2015, the cooks squared off to prepare beef tips, scalloped potatoes, biscuits, and bread pudding. In 2016, the cooking focused on stew, beans, cornbread, and cobbler. The chuckwagon cooking takes place outside on the arena grounds, where each participating ranch sets up tents or tarps.

It’s fun to stroll through the steam and smoke and watch the cooks stoking fires and stirring beans in black cauldrons while cobbler bubbles in big pans. Smelling all that can work up an appetite, but the judges are the only ones besides the ranch families who get to taste the entries. But Daddy Bob’s Smokewagon, a traveling smokewagon that serves barbecue in Graham and Wichita Falls, sets up outside the exhibit hall and offers brisket sandwiches and fixings. 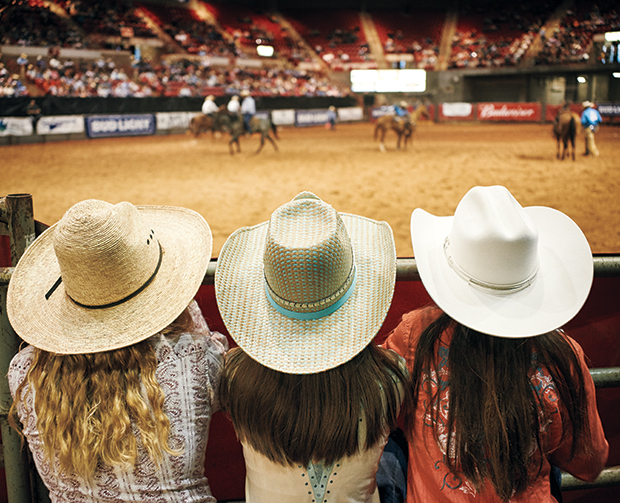 Non-ranchers might not expect to find a talent contest at this event, but singing around the campfire and arts and crafts have been a part of ranch life since the late 1800s. Ranch families used to get together at the end of the spring roundup to relax, play music around the campfire, and tell stories.

Nowadays in the roundup’s talent competition, ranch teams also receive points for music and skits, painting and drawing, photography, furniture and home décor, crafts and jewelry, and Western handwork. The arts and crafts contest is held in a room inside the exhibit hall. I was impressed with the quality of the paintings and drawings, handmade rustic furniture, and especially the photography of scenes from ranch life.

The music and skit portion of the talent competition takes place on a livestock trailer that serves as a makeshift stage. Last year, cowboys from some of the ranches played guitar and sang original tunes. But opera? I didn’t expect to hear that at a ranch roundup, yet April Bonds from the Bonds Ranch expertly sang several operatic pieces from the opera “Carmen” and from Puccini’s “La Bohème” to win the musical competition. Jo, her mother, performed a graceful interpretative dance to accompany her daughter.

“That was amazing,” Missy says of the rousing ovation from the audience. “It gave me chills.”

Ranch youngsters get in on the action, too. Children ranging from age 5 to 12 compete in teams to rope and mark goats within two minutes. The three fastest teams win prizes and bragging rights.

“You’re seeing generations of employees coming up in these ranches and competing,” Missy says. “It’s very family-oriented. Even with the chuckwagons, you’re seeing wives and sisters and fathers and daughters.”

After watching the ranch events and looking at the arts and crafts, we headed over to the Multi-Purpose Center’s exhibit hall, which houses the Bit, Spur & Western Collectible Tradeshow. We spent several hours exploring the aisles of booths, which sold hand-tooled boots, belts, and other leather goods, Western clothing and jewelry, handmade saddles and tack, and even giant brush cutters.

I left the ranch roundup feeling like I’d witnessed pieces of Texas’ past, present, and future in one weekend. Certainly, Texas ranching is changing and adopting more technology and modern ways to survive as a business, but it’s comforting that so many traditions continue. While the ranches compete at the roundup, they also root for each other. They win just by being there and coming together every year to celebrate their rich heritage.

As Missy says, “You come to think of your competitors as your family where you cheer everybody on. When you see these ranches, you see what a close-knit family we all are.”