Take a stroll through history on Texas main streets.

Written by Lois Rodriguez, Photographs by Will van Overbeek | From the January 2017 issue | Updated: April 21, 2018 | Filed Under: Uncategorized 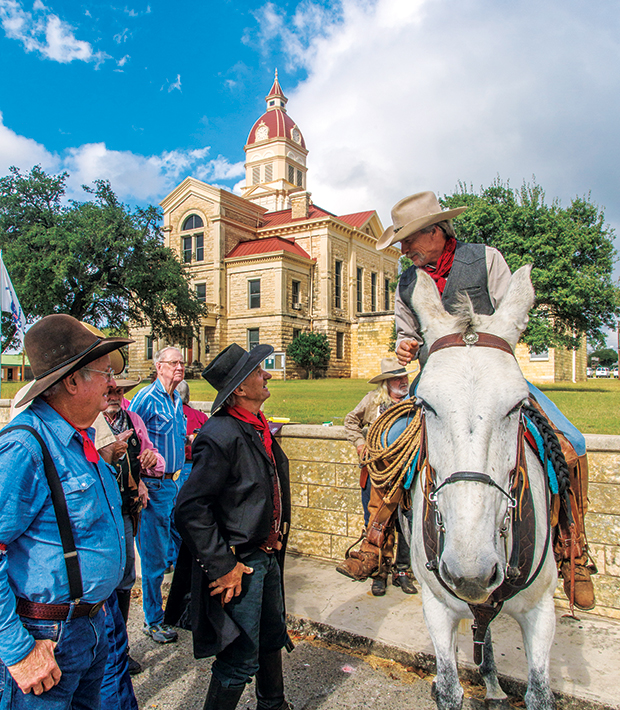 Main Street. For many Texans, these words evoke memories of Saturday shopping trips, favorite lunch counters, and afternoon movies with friends. In the old days, every town had a main street or main drag, those few blocks where a town’s social, cultural, and economic threads wove together—the community’s heart and soul.

As Texas’ cities grew, small-town main streets fell on hard times. Some main streets weathered the turbulence, while others bounced back when communities recognized what they had lost. Today, these streets work a bit like time machines, taking us back to a different era, rich in history yet full of life. For a time warp experience, here are five Texas main streets that offer a nostalgic step into the past along with contemporary fun.

In 1885, Galveston reigned as the largest and richest city in the state. The Strand, its banking, retail, and shipping hub, was widely known as the Wall Street of the Southwest. Galveston had the state’s first hospital, grocery store, opera house, medical college, and public library. It also had Texas’ first post office, part of the 1861 Customs House on Postoffice Street, which today is home to renovated buildings full of art galleries, shops, restaurants, and residences.

On a self-guided tour of The Grand 1894 Opera House, check out the re-created carved stone arch entrance, replica painted canvas curtain, and beautifully stenciled box seats. The theater survived the 1900 Storm, ensuing hurricanes, and years of neglect before its restoration.

Back in the day, working cowboys came to main streets to stock up on essentials, have a hot meal, and two-step with the ladies. Here in the Texas Cowboy Capital, they still do, and so can you.

Head downstairs to Arkey Blue’s Silver Dollar for live bands on Fridays and Saturdays, including occasional performances by Arkey himself, and jam sessions on other days.

Cowboys have been chowing down at the OST Restaurant, named for the Old Spanish Trail and set in an 1870 building, since it opened in 1921. The menu runs the gamut from all-day breakfast to burgers, steaks, seafood, Tex-Mex, sandwiches, and salads. Grab a seat in one of the saddles at the bar or in the John Wayne Room, adorned with photos of the actor.

The fifth-oldest town in Texas, Jefferson served as the state’s largest and most significant river port in the mid-1800s. Steamboats arrived from New Orleans, and many passengers headed to Austin Street’s Excelsior House Hotel. You can still stay at the Excelsior, where the rooms exude Victorian elegance with period furniture and carry the names of former guests like President Ulysses S. Grant. Nearby, the Jefferson General Store occupies an 1866 building that once housed the town’s first hardware store. The General Store features an old-time soda fountain and a world of sweet treats and gifts.

Also on Austin Street, the Historic Jefferson Hotel occupies an 1851 building just blocks from the riverfront. Previously used as a cotton warehouse and a dance hall, the hotel features Victorian antiques and purportedly a few ghosts.

Steep yourself in Jefferson’s history with one of Lone Star Carriage Company’s 30-minute history tours by horse-drawn carriage and a visit to the Jefferson Historical Society & Museum, also on Austin Street. Its 1888 building, which was once used as a federal courthouse and post office, contains Victorian fashions, period furnishings, farm tools, antique firearms, and Caddo artifacts.

Established in 1846, Palestine thrived on commerce from paddle-wheel steamers on the Trinity River and, beginning in 1872, from the International-Great Northern Railroad, later the Missouri-Pacific. Trains carried lumber, cotton, cottonseed oil, and fruit from Palestine to Houston and points beyond.

On East Crawford, Pint and Barrel Drafthouse serves burgers and pub grub,including a popular pulled-pork sandwich, plus a selection of local craft beers.

On West Crawford, the Spanish Colonial-style Texas Theater, opened in 1930, now houses Palestine Community Theatre, which presents local dramatic productions. Nearby, the Redlands Historic Inn, built in 1914 as a hotel for railroad travelers and employees, today offers a variety of suites. Embark on a time-travel trip by booking a room and taking a ride on the Texas State Railroad, a tourist train that runs between Palestine and Rusk.

The plans that established the Rio Grande Valley town of Weslaco in 1919 designated Texas Boulevard the town’s main street—and it still serves that purpose today. The four-story Hotel Cortez, built on the corner of Texas and Third Street in 1928, launched a Spanish Mediterranean architectural theme for downtown, bolstered by local architect R. Newell Waters’ efforts in the 1930s to resurface surrounding buildings with stucco and roof tiles.

That look still adorns Lionel’s Western Wear, between Third Street and Fourth Street, a family-owned clothier since 1959. It also remains on the former Edelstein Furniture Store, now the Weslaco Museum, which covers the area’s complex history and presents exhibitions of local artwork.

Waters also designed the historic Spanish Mediterranean Skaggs House—between Tenth Street and 12th Street—which was built for local bankers and citrus growers Lester and Florence Skaggs. Currently under renovation, the Skaggs House marks the entrance of the Frontera Audubon Center. The center’s 15 acres of Tamaulipan Thornscrub forest and ponds provide habitat for resident birds such as green jays, chachalacas, and great kiskadees, as well as occasional rarities like blue buntings.