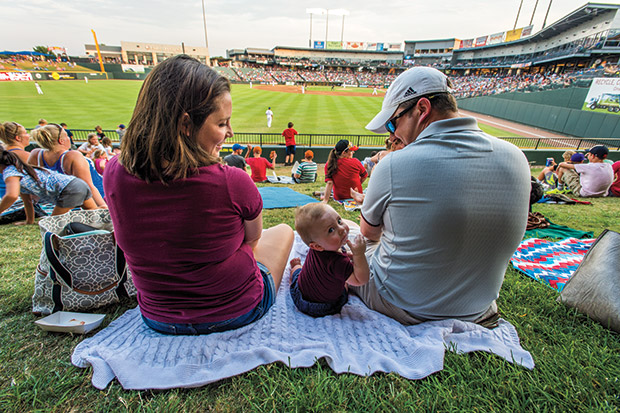 Wouldn’t you want to see these baseball legends up close, tugging their caps and digging in their cleats in the throwback uniforms of their eras?

They and at least a dozen other big league Hall of Famers played in the Texas League. Fans today have the chance to see such stars in their formative years at 11 Texas ballparks featuring 10 teams and five leagues.

I know. I was a pre-teen in Nashville, Tennessee, in the late ’50s when the Southern Association team (Double-A) was a Cincinnati farm club. On the field was the future Red’s All-Star hurler, Jim O’Toole. Catching foul balls was a bonus, being so close to the action.

These days, Texas minor league stadiums offer even more for kids. The Frisco RoughRiders will open a lazy river in June beyond the outfield fence.

This year’s lineup of minor league baseball teams in Texas represent talent just below the major leagues to journeymen in the independents. Either way, fans will love the spirit of play wherever you attend. Here’s a list of the teams and some of the specials they offer.

Round Rock Express (Texas Rangers). A 2016 deal: Family Plan for seats on outfield lawn, $250 for six tickets per game for any game Monday through Thursday.

Class AA (Texas League), two steps below the major leagues with drafted players one or two years away from the majors if they prove themselves.

Corpus Christi Hooks (Houston Astros). Great for a family vacation. Beaches on Padre Island and Mustang Island are minutes away, and there’s a water park next door.

Frisco RoughRiders (Texas Rangers). A big city suburban experience, no doubt, but still one that works for children to be close to the action. New logos for 2016 borrow on Teddy Roosevelt’s Rough Riders history.

San Antonio Missions (Los Angeles Dodgers). The stadium’s far west side location is a wonderfully casual way to experience professional baseball close up. Mascot Ballapeño is worth the trip.

Sugar Land Skeeters, Atlantic League: Although independent, the league bills itself as the “highest level” of professional baseball other than Major League Baseball. Teams are concentrated on the East Coast, except for Sugar Land.

A good history of minor league baseball in Texas up to 2009 can be found at: https://texasalmanac.com/topics/history/minor-leagues-texas