Written by Art Williams, Photographs by E. Dan Klepper | From the January 2013 issue | Updated: October 29, 2018 | Filed Under: AdventuresGetawaysOutdoorsThings to DoTRAVEL

The summit of Mount Locke, home to McDonald Observatory, pokes into a particularly isolated patch of the rural West Texas sky, making it a very dark place to be on a moonless night.

The remote peak, one of dozens forming the Davis Mountains, lies northwest of the communities of Fort Davis, Marfa, and Alpine, where a dark-skies initiative (designed to minimize unnecessary illumination from outdoor lighting) helps keep the night sky free of excessive brightness. For a few nights each month, the mountain is also free of the moon’s spectral haze, and night atop the peak achieves a starlight glow. Earthbound objects dissolve into silhouettes and seem to float, unmoored, like smoke. Overhead, a blaze of radiant particles burns in full conflagration as Mars brightens in the southwestern sky and Jupiter rises in the east. Amid the spectacle, falling stars hang in the balance for one final shining moment before descending and flaming out.

Together, Mount Locke and McDonald Observatory, a University of Texas research facility, have been providing the world with one of its premiere stargazing destinations for more than 70 years. Ten research telescopes occupy Locke’s peak and adjacent Mount Fowlkes, a companion summit connected to Locke by a swayback mountain pass. The observatory’s three main telescopes, the Otto Struve, the Harlan J. Smith, and the Hobby-Eberly, operate every clear night of the year, offering astronomers a chance to enter deep space and explore expanding intergalactic space, black holes, and supernovas.

But professionals aren’t the only stargazing enthusiasts to step through McDonald’s “stargate.” The observatory offers a robust schedule of weekly viewing programs for the public, including its popular “star parties,” where astronomers operate telescopes to track space objects like planets, binary stars, spiral galaxies, and gaseous nebulae. Star-party participants stroll from telescope to telescope, witnessing space phenomena like the Swan Nebula, the Whirlpool Galaxy, and the rings of Saturn. The viewing options change with the seasons; each month brings new sights within telescopic range.

For visitors wishing to dive deeper into the observatory’s mission and equipment, the facility also sponsors “special viewing nights” throughout the year, utilizing several of the resident research telescopes. These programs include opportunities to peer through the observatory’s 36-inch telescope (36 inches refers to the mirror’s diameter), a starlight-gathering system anchored to Locke’s rocky mountain flank, and the 107-inch Harlan J. Smith telescope, designed for planetary studies. The Smith is one of two massive telescopes crowning Mount Locke’s summit (the other is the Otto Struve).

Observing the stars through the observatory’s 36-inch telescope during one of the viewing programs means you’ll be enjoying some of the darkest skies and brightest starshine in the continental United States. The small telescope (relative to its two neighbors, at least) was designed to collect as much light as possible to help measure star brightness and variability. Its dome, constructed with leftover materials from the 1938 Otto Struve, rotates atop a native stone housing. You’ll spend about three hours viewing different space objects and hearing the knowledgeable staff’s detailed explanations of cosmic phenomena. 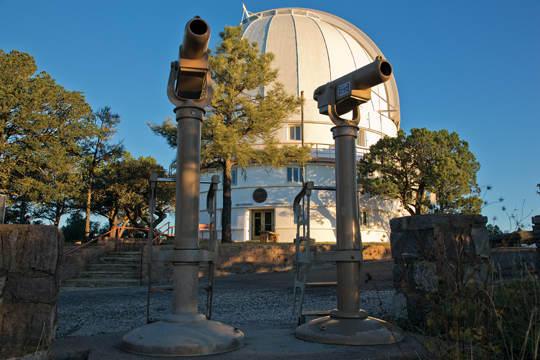 Just beyond the 36-inch dome, Mount Locke’s volcanic palisades drop precipitously. The cliff’s edge affords an unobstructed view of the serpentine Davis Mountains Scenic Loop, the 75-mile stretch of Texas 118 and Texas 166 woven into the valley below. Lightning from seasonal storms often strikes distant peaks along the horizon, adding fireworks to the galactic array overhead.

The Harlan J. Smith, another telescope performing double duty as research laboratory and host for special viewing nights, features a monster of a mirror, weighing in at 7,800 pounds and with a 107-inch diameter. It’s dwarfed only by the telescopic cylinder itself, which is 32 feet long and weighs 160 tons. (Smith directed the observatory from 1963 to 1989 and spearheaded the telescope’s construction in the mid-1960s.) Designed to explore the solar system, the configuration of mirror and instrumentation produces a light-gathering power one million times greater than that of the human eye. Once used to reflect a laser beam off mirrors positioned on the moon by Apollo astronauts, the Smith telescope helped define the distance of our lunar companion from Earth and tested Einstein’s theory of general relativity. Today, astronomers outfit the Smith telescope with a variety of instruments to study the composition of stars and the motion of galaxies, as well as to search for undiscovered planets. Rarely idle, the Smith’s giant eye penetrates the cosmos every night of the year that offers a clear view.

Special viewing nights using the 36-inch scope and the Harlan J. Smith also offer a few more perks than the weekly star parties, including smaller groups, late-night stargazing, and an option to stay overnight at the Astronomer’s Lodge. The accommodations include room, private bath, and meals. Breakfast in the Astronomer’s Lodge dining room (quiet please—astronomers are sleeping just down the hall) also features a sweeping view of the Davis Mountains and Mount Fowlkes through a wall of windows.

At the scenic panorama’s center sits the silver-clad Hobby-Eberly, the observatory’s largest telescope, where some of the most innovative on-site research occurs. Its 91 identical, six-sided mirrors, assembled together into one giant concave sur-face, collect and focus light from astronomical objects. From there, the light is split into component wavelengths. This study of astronomical objects, called spectroscopy, explores the chemical composition of a star, its surface temperature, and, together with other information like mass, reveals the star’s evolution, its destiny, rotation, and whether it’s accompanied by any planetary companions.

The observatory offers both guided and self-guided tours of the Hobby-Eberly, allowing visitors to enter a viewing chamber and admire the mirror construction from behind a glass wall. Learning about the Hobby-Eberly makes for a fact-filled afternoon; beyond the science, the telescope is simply a beautiful thing to see. The intricate design, delicate materials, and structural ingenuity express an architectural elegance that is both organic and alien to the surrounding natural world it inhabits.

This contradiction between terrestrial indigenity and cosmic exploration is represented throughout the observatory grounds, where domes, antennae, discs, towers, lasers, mirrors, and lenses interlace with the Davis Mountains’ habitat, a unique ecosystem populated by species like Montezuma quail, Chisos agave, pronghorns, and golden columbine. Few places on earth share a similar synchronicity.

The panoramic view from Mount Locke also inspires retrospection as much as it affords exploration, prompting the imagination to question just how 19th-Century inhabitants of the Davis Mountains would have grasped the 21st-Century transformation of their landscape. What would the early Texas pioneers have made of the sophisticated telescopes or the entire stargazing mountaintop? The observatory has been a leader in astronomy research since its dedication in 1939—when UT and the University of Chicago established the facility with seed money left by the late banker William Johnson McDonald—signaling a period of accelerating discoveries that has yet to subside. The surrounding countryside, however, has remained a pastoral study in classic Texas ranching since the 1800s, coexisting alongside a natural world relatively undisturbed by outside forces. Even at the dawn of the modern age, when astronomers first turned the Otto Struve telescope’s eye to the distant planets, concepts like dark matter, black holes, and expanding galaxies were still in their infancy and hardly the catchphrases that serve our routine vocabulary today.

But, as it turns out, some inhabitants of the Davis Mountains weren’t strangers to the alien world of the cosmos. In 1903, a seven-year-old named George Duncan discovered a significant piece of cosmic debris just 15 miles northwest of Mount Locke. The 1,530-pound rock appeared to be different than any other boulder George had seen. He was correct, in fact, because the solid iron and nickel lump proved to be a meteorite, one of the earliest and largest of its kind found in Texas. As a result, the meteorite spent time in the Field Museum of Chicago  before it was returned to the Davis Mountains in 1987.

Today, visitors can view the meteorite up close at the observatory’s Frank N. Bash Visitors Center, named for the observatory director from 1989 to 2003. In addition to the meteorite display, the center features a state-of-the-art, interactive exhibition hall where you can learn all about the universe and its principles. The center’s theater shows a multimedia presentation on the observatory’s research into the planet’s most important star—the sun—featuring telescope views of sunspots and flares taking place across the sun’s surface in real time. Afterward, you can relax and have a snack at the Star Date Café, then purchase some “space oddities” like squishy toys, hand-blown glass galaxy orbs, or glittering kaleidoscopes at the gift shop. Or take the 90-minute tour of the 107-inch Harlan J. Smith and learn more about the activities taking place in the observatory’s professional scientific research facility. Then sign up for the evening’s star party. If you find yourself inspired by all you’ve seen, check the observatory schedule for the next special viewing night, make a reservation, and prepare to be star-struck.

Participating in any of the special viewing nights, along with a stay at the Astronomer’s Lodge, also provides access to Mount Locke after hours. The mountaintop is closed to both visitors and traffic after dark, giving lodge guests an opportunity to experience the observatory environment just as the astronomers do who perform their research into the early morning hours. Once the viewing programs are over, the after-midnight hours on the mountaintop fill with nature’s night song, the labor of great horned owls and hunting coyotes. Unusual sounds, too, blanket the air, like icebergs groaning and earthquakes rumbling, even the whisper of ocean surf and singing sirens. They’re a bit unsettling until you realize these noises emanate from the rotation of the giant telescope domes above you, the Struve and the Smith, the mechanically driven behemoth instruments that turn slowly and methodically throughout the night, mimicking the movement of the earth itself through the cosmos. Across the pre-dawn hours, the mountain becomes an odd, dark place where nature’s terrestrial simplicities comingle with study of the most complex and perplexing forces at the heart of our existence. After a full night of the observatory experience, it shouldn’t be a surprise when you wake the next morning with the sense that the universe and everything in it will never quite seem the same again.

“Whether or not you ‘grok’ the science behind the stars,” says writer and photographer E. Dan Klepper, “you’re still gonna be dazzled by their spectacle. A McDonald Observatory stargazing program should be at the top of every Texan’s to-do list.”