Pesca on the River 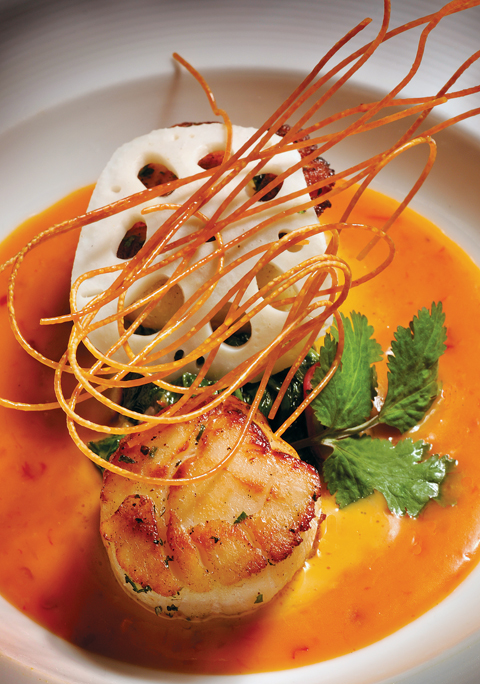 San Antonio boasts a diverse culinary tradition, from the chili queens who began selling the iconic bowl of red here in the 1880s, to the debut of the Frito in the 1930s, after Frito-Lay founder Elmer Doolin purchased the recipe from a local café owner. The city is also proud home to Pace Picante Sauce, and, of course, has too many great steakhouses to enumerate. But who knew that along the banks of the River Walk dwells one of the region’s best seafood restaurants?

I’d heard that Pesca on the River, the Watermark Hotel & Spa’s signature restaurant, was extremely good, but the tip floated in one ear and out the other. Frankly, I’d never equated the Alamo City with fresh fish. But when my parents and I visited not long ago—they were there for a convention and I’d driven down from Austin to meet them—we found ourselves rambling along the River Walk. Not only was it my birthday, but it was my father’s, so the three of us were in search of a meal worthy of a celebration. We wanted something sedate and light, chic but not too formal, someplace not too focused on beef. I personally craved high-end seafood but didn’t want to sacrifice what was left of my 401K to enjoy it.

As we meandered along, I saw Pesca and remembered my friend’s suggestion. The line of diners waiting for a table seemed daunting, but the staff was so genuinely intent on making guests comfortable—grabbing drinks for a couple as they waited, ushering a family inside to the oyster bar—that we decided the 25-minute wait was a non-issue.

Chatting with the affable general manager, I learned that Executive Chef John Brand had recently taken the helm at the Watermark and its sibling hotel, La Mansion. Brand is a stellar name in resort circles, and his presence at Pesca was a surprise that would make the evening even sweeter.

Within 20 minutes, we were seated on the riverfront patio, which I highly recommend for its people-watching and old-world charm. As night fell, flickering light from iron sconces cast a romantic glow across the building’s aged stone walls, evoking another century. In fact, the original 1900 structure was once home to a saddlery that made tack for Pancho Villa and Teddy Roosevelt’s Rough Riders. Looking inside, I could see a handsome, paneled dining room with dozens of maple-hued tables and banquettes filled with happy, chattering diners.

Surveying the menu, we indeed saw very little beef. Yes! Better still, the selection of inventive fish and shellfish dishes was palatably priced: a Sonoran seafood cocktail (a blend of shrimp, jumbo lump crab, and calamari with lemon juice, red onion, cucumber, and tomato) for $10, as well as a baked-oysters appetizer that reminded me of Oysters Rockefeller gone Southwestern (plump, savory morsels blanketed with applewood-smoked bacon, baby spinach, and ancho hollandaise) for $12.

The scallops appetizer I chose was the first hint that something extraordinary was happening in the kitchen: Three seared, fleshy discs were delicately sauced with a mild coconut-sake broth that was infused with ginger, sweet Thai chilies and lotus root. A lover of scallops, but not of coconut, I was concerned the sweet milk might overpower the shellfish and asked our waiter’s advice. He assured me that it was perfectly balanced, with only a hint of the rich coconut. The dish was so divine that I considered ordering seconds.

Next came my entrée, pan-seared flounder, which challenged the scallops in terms of delicacy and temperament. The brown butter sauce with capers was rapturous–as delicate as fine lace, if lace had taste. The fish flaked perfectly, and the sides of griddled broccolini and fingerling potatoes were better than good. I just couldn’t pay them much attention, given their seafaring companions.

My father, who’s never met a lobster he didn’t love, ordered the Maine shellfish, steamed whole in the shell, then brushed with lemon and butter ($45, around market price at the time). This lobster he loved also, but I felt it was steamed just a smidgeon too long, and my father would have preferred it partially shelled. But if you don’t ask, they don’t crack. No matter. Alongside, he had a baked potato, but you can order other vegetables or grains such as quinoa or wehani rice.

Our finale was a traditional crème brûlée, dissolve-in-your-mouth smooth. If cotton candy had a custardy cousin, this might be it.

After our meal, the three of us lingered for a while, watching River Walk revelers (a nightly parade, no matter what the season) trundle off to their hotels in good spirits. My father and I had celebrated our birthdays just as we’d hoped, toasting quietly to another year of shared good company. But we also toasted an exquisite, and surprisingly affordable, meal.

San Antonio may not be as well known for fresh seafood as Galveston, Corpus Christi or Houston, but Pesca is the kind of dining experience that can happen anywhere if a restaurant has the right chef, the right setting, the right vision, and the right intentions. To this elegant gem, I raise a glass and
wish it many happy returns.