Written by Art Williams, Photographs by Russell Graves | From the July 2015 issue | Updated: June 15, 2015 | Filed Under: Culturemade in texas 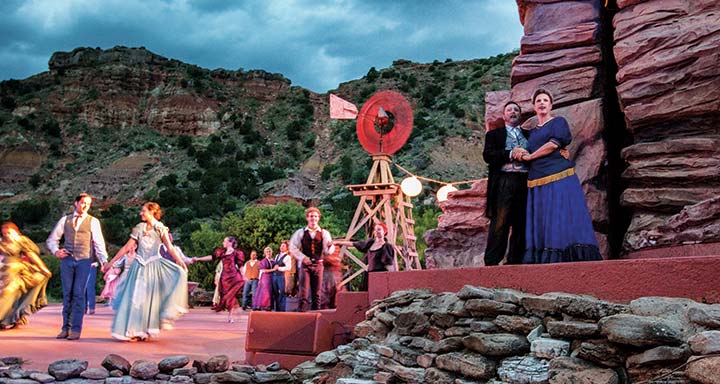 The infectious opening song of TEXAS—a bouncy Broadway-style tune sprinkled with Texas swagger—sticks in your head long after the outdoor musical ends.

“There’s no better place to be than Texas,” proclaim the singers and dancers, sweeping their arms to the colorful backdrop of Palo Duro Canyon State Park. “You can look around and see in Texas.”

Celebrating its 50th season this summer, TEXAS dazzles audiences with its one-of-a-kind blend of musical theater and scenery in Pioneer Amphitheatre, an 1,800-seat venue at the base of Palo Duro Canyon, located 12 miles east of the town of Canyon. Against the red rock walls of the nation’s second-largest canyon, the musical chronicles the fictional tale of Calvin Armstrong, a young homesteader determined to scratch out a place for himself in the tough environment of the Texas Panhandle in the late 1800s.

A cast of more than 60 actors, dancers, and singers (about a third of them students at nearby West Texas A&M University in Canyon) performs the story, which incorporates historical events like wildfires and the arrival of the railroad, plus legendary real-life characters such as Comanche Chief Quanah Parker and cattleman Charles Goodnight. State-of-the-art sound, stage lighting, and pyrotechnics—even a startling bolt of lightning—enhance the show, as do the “Dancing Waters of Texas,” choreographed water jets that enliven the event’s finale, a patriotic tribute to Texas and the United States.

“What I’ve discovered is that everyone takes a very personal experience from the show,” says Dave Yirak, a 17-year veteran of the play and the artistic director for the past 10 years. “People who’ve worked on the show have a deep love and appreciation for the production, and that translates to the audience. The audience, in turn, takes away their own special memories.”

TEXAS traces its roots to 1960, when Canyon resident Margaret Harper, a teacher, musician, and community leader, reached out to Paul Green, a North Carolina playwright known for writing musical dramas based on local history in other locations in the United States. Within a year, Green visited the Panhandle and agreed to create the musical. Pioneer Amphitheatre opened in 1962 and presented the musical Fandangle (still performed every June as Fort Griffin Fandangle in Albany), and in 1966, the first season of TEXAS opened.

The show has changed over the years, but not very much. Yirak says the artistic staff “tries to give the audience something a little different each year,” such as subtle changes to a scene or two, or more elaborate features like the choreographed water jets and the patriotic grand finale.

“Above all, we try to maintain a respect for the original story and not change the message too much,” Yirak says. “We want to reflect the people and culture of the Panhandle in our presentation so that everyone can see that this is a magical place to live.” 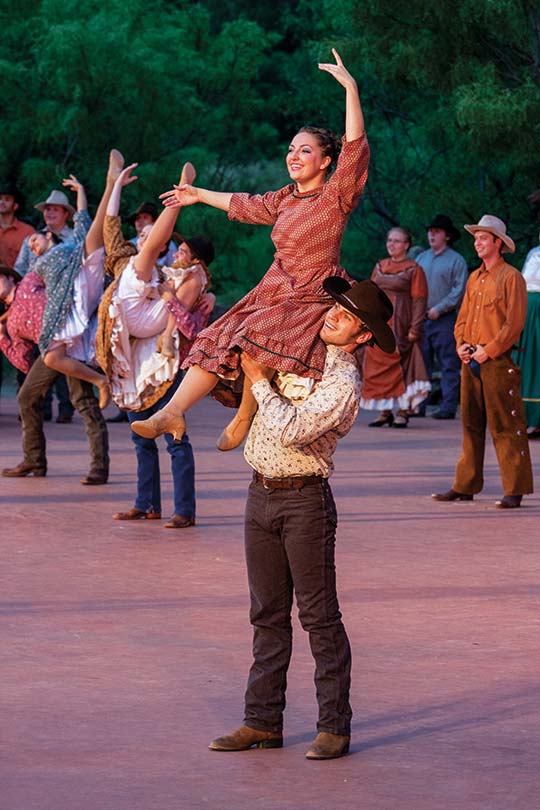 The Texas Panhandle Heritage Foundation, the nonprofit that produces the show, plans to make this summer’s 50th season a noteworthy one. On the summer’s closing night, August 15, the cast and crew will bury a 50th-anniversary time capsule containing items such as a souvenir program, a video of the show, and pictures of the 2015 cast and crew. Also on closing night (and Fourth of July weekend), the show will punch up the grand finale with extra fireworks and an enhanced water show. There will also be a reunion for alumni performers on the weekend of July 17th with festivities including a party, tours of West Texas A&M University, dance classes, and a trip to the show with a chuck-wagon dinner.

According to the foundation’s count, about 67,000 visitors attend the 65 summertime performances each year. Of those attendees, 60 percent travel from more than 100 miles away. On a wall of the concession shop that sells drinks and souvenirs, maps of Texas and the world are covered with pins marking the hometowns of those who’ve attended TEXAS, a geographic representation spanning the globe.

Almost every summer for the past 21 years, I’ve taken my family and friends from afar to see the musical. While the play is mostly the same from year to year, the production introduces enough tweaks to the story line and various special effects to retain my interest in the epic tale.

Aside from the play itself, the entire TEXAS experience is enjoyable for the family. Before the show begins, visitors gather outside on the amphitheater patio while a live band plays familiar country music songs. Others attend the pre-show Chuck Wagon Bar-B-Que, a buffet meal of brisket, sausage, and sides, held in a picnic area in the adjacent foothills.

Beyond the picnic area, families explore the surrounding hills of the state park, which are strewn with rocks and boulders. With a short climb to one of the nearby hilltops, hikers take in a sweeping, panoramic view of the sheer, red canyon walls stippled with various hues of gray, ochre, and yellow. Contrasting with the rocks, the canyon floor is a patchwork of green mesquite and juniper. When people from outside of Texas think about Texas, this is probably close to what they imagine.

The rugged beauty of Palo Duro Canyon ties directly into TEXAS and its timeless story of love, hardships, and sacrifice. As such, audiences connect with the struggles and triumphs of Calvin Armstrong and the supporting characters. Their pioneer spirit and heritage of resiliency still shape the Texas Panhandle to this day.