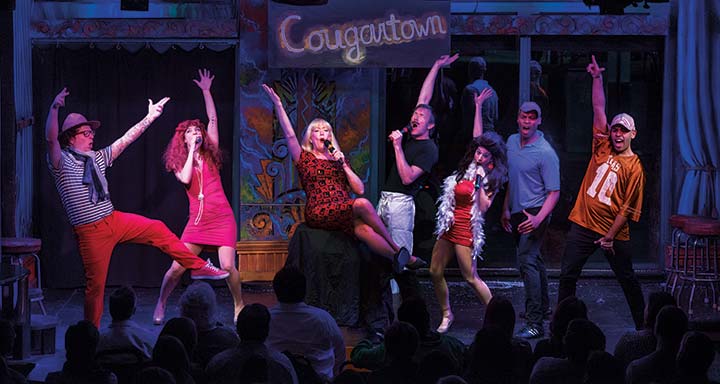 Chicago has the Second City. New York has Saturday Night Live. Los Angeles has the Hollywood Improv. Closer to home here in Texas, Austin’s got its own brand of comedy show: Esther’s Follies.

Since 1977, Esther’s has invited locals and visitors alike to come down to Sixth Street for a night of, well, just about anything, so long as it brings a smile. The shows, which take place Thursday through Saturday nights, are a blend of scripted comedy sketches and monologues, Broadway-style musical numbers, and magic illusions.

Current events inspire many of the 15 to 20 sketches in each show. Nothing is off-limits. One minute you’ll get a live look at a meeting of cavemen—turns out it’s actually just a Congressional hearing; the next, “Martha Stewart” displays a surprising variety of uses for maxi pads, including as a bow tie for a formal evening on the town. The audience guffaws and groans along in the intimate, 300-seat theater, growing more raucous as the theater bar gets busier.

“The best sketches aren’t just funny,” says Ted Meredith, a nine-year Esther’s actor and writer who’s played everyone from Vladimir Putin to Honey Boo Boo. “They’ve got a showmanship level, whether athletic skills, or vaudeville, or supernatural ability, that supersedes the comedy.” 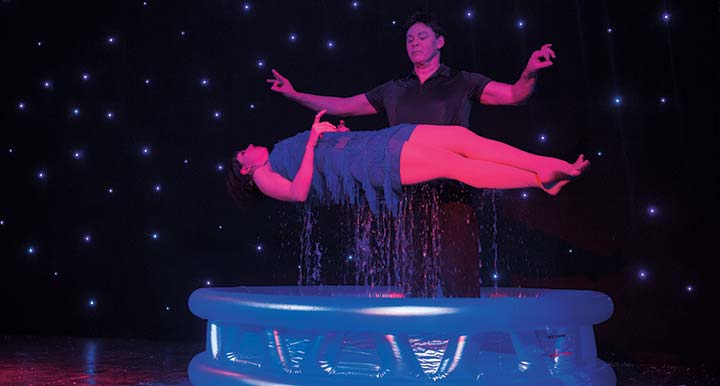 In between sketches, comedic-magician Ray Anderson dazzles with his head-scratching illusions, which include levitating his assistant with water from the Esther’s pool. A 30-year veteran of the show, Anderson collaborates with designers who also work on Las Vegas magic shows, including David Copperfield’s. Anyone in the first few rows of the audience is eligible to be part of Anderson’s act. In some shows, he serenades a female audience member as he saws her in half in a box. More often than not, the person next to the original “selection” also ends up onstage, which is typical of Esther’s interactive approach and the actors’ penchant for generating laughs—and a few blushes.

Esther’s Follies provides a respite from the routine festivities of East Sixth Street, a corridor of seven or so blocks in downtown Austin lined with bars that attract a raucous crowd, particularly on weekends. But the show also thrives on the revelry outside: The back wall of the stage features two large windows that look out onto the street. And while some of the shenanigans with the windows are planned—an actor portraying a random street urchin twirling a flower and dancing, for example—a good chunk is unscripted. First-time passersby often stop to peer at the show inside, seemingly unaware that the windows have a two-way view.

“You can come here without knowing anything about Texas, Austin, or Sixth Street,” Meredith says. “You’ll leave knowing things about all of those, while having laughed for an hour and a half.”

Co-producers Shannon Sedwick and Michael Shelton headed the troupe that opened Esther’s Follies in 1977, naming it for the late swimmer and Hollywood actress Esther Williams. Located 100 feet west from the current location, the first few shows were performed around a wooden bar. It wasn’t long before Shelton and Sedwick, a husband-and-wife team, decided to build a stage, placing it at the front of the building in front of the windows to foster the interactive street entertainment that still contributes to the show’s spontaneity.

“The windows create a synergy with the crowd,” says Ellana Kelter, who’s had two separate stints at Esther’s, appearing in sketches and as Anderson’s assistant. “We’re laughing at some-thing together.” 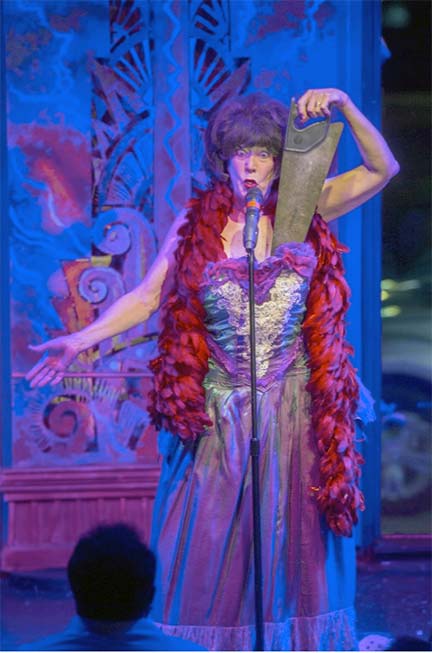 After the original Esther’s building burned down in 1982, the group bounced around different Sixth Street locations before establishing its current home in 1991. Throughout the years, the troupe has honored its namesake by decorating the walls with vintage Esther Williams movie posters. The bathing beauty was also featured in the late artist Doug Jaques’ 60-by-20 foot mural at the original location, which depicted Williams diving into Sixth Street. When the group found its current home, Jaques re-painted the original mural inside the theater with coral, marine life (both real and imaginary), and a sunken treasure ship.

In the theater’s lobby, three giant portraits loom over the waiting crowd, an homage to some of Esther’s most famous characters. There’s Patsy Cline, as portrayed by Sedwick; the Amazing Frank, Anderson’s alter-ego; and the late Margaret Wiley’s Chi Chi LaBamba, who for many years started each show by discomposing various men in the crowd in her quest to find the “Hunk of the Night.”

While everything is fair game at Esther’s, the cast makes sure nobody feels personally attacked.

“Our audience comes from all different backgrounds,” Meredith says. “I don’t want anybody to feel bad because they vote a certain way. All of our comedy is very much steered toward being accessible to as many people as possible.”

After the show, the 12 members of the cast meet with guests as the theater spills out onto Sixth Street. It’s not uncommon to hear visitors exclaiming, “I had no idea what to expect!” This unpredictable charm has made Esther’s an Austin destination for nearly 40 years, with no signs of slowing down.