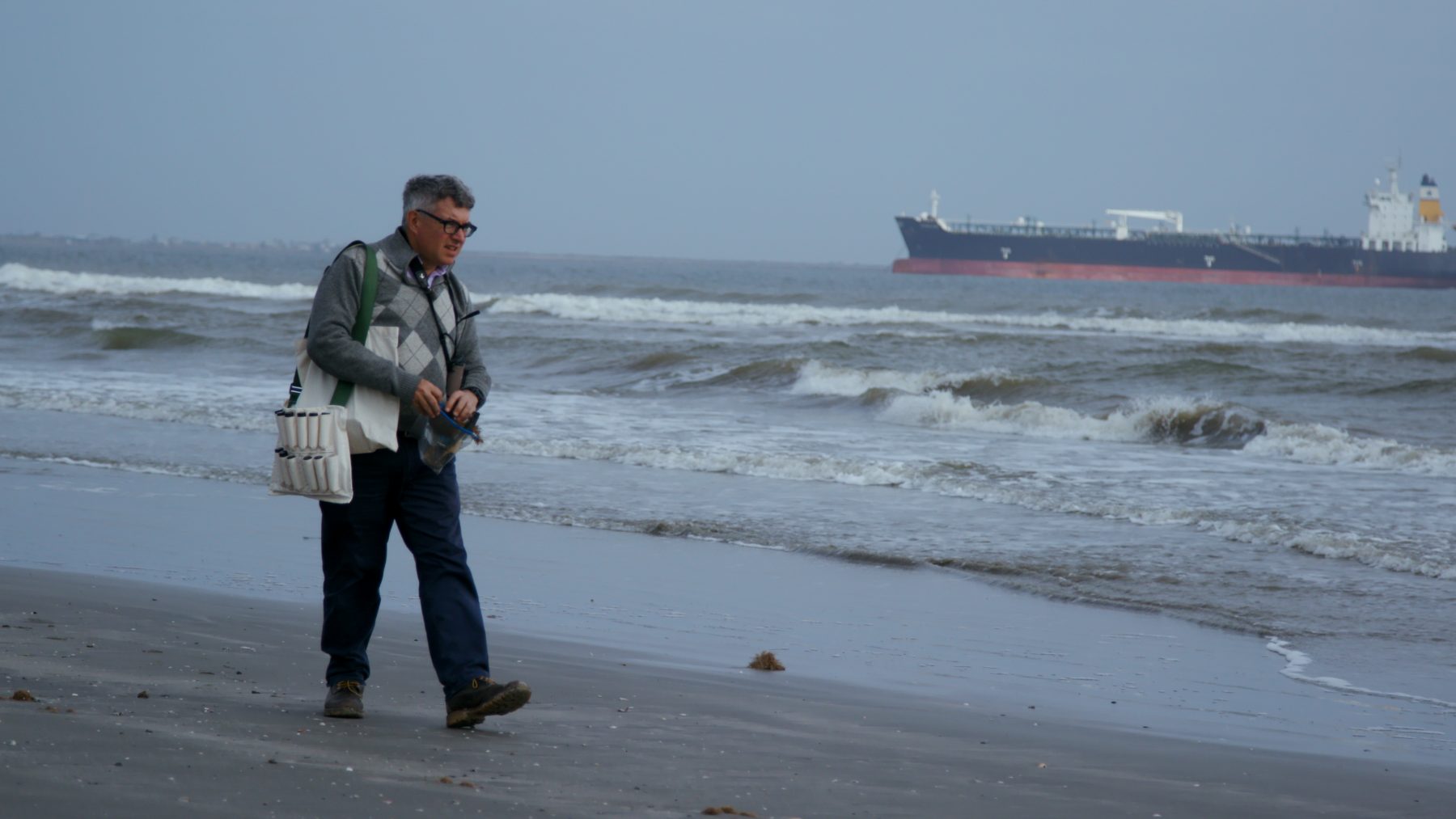 Artist Mark Dion combs the beach in Galveston for objects to include in his work for the Amon Carter Museum of American Art in Fort Worth. Photo courtesy EC Films.

When the COVID-19 pandemic temporarily closed the doors of the Amon Carter Museum of American Art in Fort Worth, it also prematurely shuttered the museum’s new exhibit, The Perilous Texas Adventures of Mark Dion.

Luckily, a documentary of the same name about the creation of the exhibit is now available to stream on Amazon Prime.

The film follows Dion, an artist based in upstate New York, as he travels throughout Texas to collect items for the Carter’s commissioned exhibit. (The exhibit will be back once the museum reopens.) During the five years of planning and executing the exhibit, Dion’s meandering path stretched from Galveston to El Paso, with stops in such places as Austin, San Antonio, and Seguin. He primarily focused on tracing the steps of four noted travelers—ornithologist and artist John James Audubon, watercolorist Sarah Ann Lillie Hardinge, architect Frederick Law Olmsted, and botanist Charles Wright—whose arduous 19th-century journeys documented life in primitive Texas.

Dion refers to his art as “landscape sculpture,” which includes works created from an array of found, collected, and purchased materials. His pieces more closely resemble what you might see at a natural history museum. Examples of his art include insects in test tubes, framed botanical clippings, a display case showcasing matchbooks, and a very old baby carriage filled with animal bones.

In the doc, created by Fort Worth-based filmmaker Erik Clapp and his EC Films, the museum staff is shown unpacking boxes Dion has shipped to Fort Worth, with contents—discovered in junk shops and on roadsides—ranging from an entire coyote skeleton and to a black widow spider found in Marfa. Dion’s “obsessive collecting creates a sense of wonder when you walk into his exhibitions,” Carter curator Maggie Adler muses on screen.

Dion shares his process, from exploring the magnificent arroyos and valleys of the Guadalupe Mountains with scientists from the Botanical Research Institute of Texas (BRIT) to talking with owners of the Museum of Natural & Artificial Ephemerata in Austin. He takes the audience along on a fascinating walk through ruins of a hot springs resort in San Antonio and a peaceful hike through the lushly forested Government Canyon, just northwest of the city, with Amon Carter’s granddaughter, Karen Hixon, who presides over the museum’s board. Along with an appreciation for Dion’s scientific curiosity, one can’t help but enjoy his sense of humor, too. When spending time in the heart of San Antonio, he marvels, as countless others do, over the Alamo’s setting: “You have this site that is solemn and has beauty to it, and all the parasitic kitsch around it,” he remarks in the film, referring to the souvenir shops that face the Texas history icon.

By the film’s conclusion, it’s clear that Dion not only understands Texas from an anthropological perspective, but from a cultural point-of-view as well. In one early scene, he shops for a custom straw cowboy hat at M.L. Leddy’s in Fort Worth, and in the final image, he’s sitting inside a Whataburger, wearing what’s become his nicely worn-in hat and chatting with a rapt local. “I’m going to miss the …. process of moving through the landscape and relying on others,” he remarks while installing his works at the Carter. “It’s been a very social endeavor. I’m going to miss the intensity of being exposed to something new, constantly. The things I encounter here, I can’t find anywhere else.”