Galveston’s New “Absolute Equality” Mural Will Be Dedicated on Juneteenth 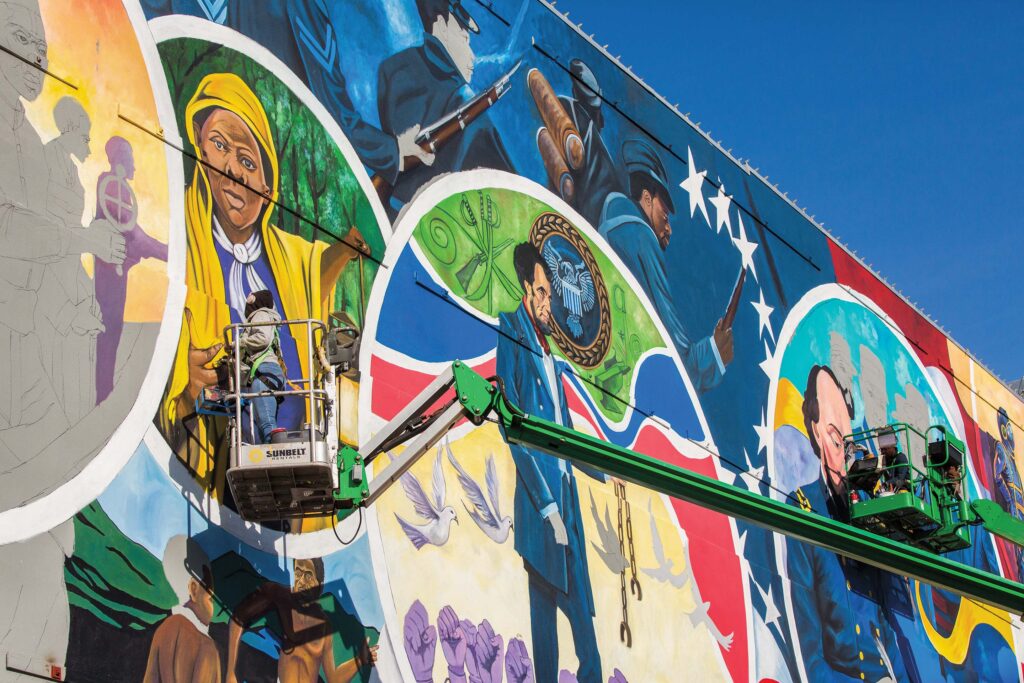 “There are times when I’m in Galveston I drive by that marker and sit in my car, eat lunch, meditate, and just kind of be with the ancestors,” Collins says.

On one such visit, Collins had an epiphany about fusing public art and Black history in an attempt to bring clarity and greater exposure to the story of Juneteenth. He saw the east wall of the Old Galveston Square Building, located right behind the marker, as ideal for a mural. Collins partnered with Sheridan Lorenz, daughter of the late energy baron and developer George P. Mitchell; and the Nia Cultural Center, a local nonprofit dedicated to Afro-centric education and culture, to raise awareness and $254,000 in funds. Set for a formal dedication on June 19, the 126-foot-long and 40-foot-tall work is titled Absolute Equality. The phrase comes from a line in Granger’s order stressing that enslaved people’s freedom “involves an absolute equality of personal rights and rights of property.”

Houston artist Reginald C. Adams, who also created a George Floyd mural in Houston, has led a six-person team for the mural’s painting. The work features images of President Abraham Lincoln; Harriet Tubman and the Underground Railroad; and Estevanico, considered the first African to traverse Texas. But the work’s central theme highlights the U.S. Colored Troops, whose overwhelming presence on that historic day has been overlooked.

“I’m honored to be a part of this project,” Adams says. “It fits perfectly into the portfolio of my work, which has focused on celebrating, documenting, and recording historical accounts of my own culture—African Americans in America.”