Written by: Martha Deeringer
Photos by: Will van Overbeek

Written by Art Williams, Photographs by Will van Overbeek | From the February 2017 issue | Updated: January 20, 2017 | Filed Under: Culture 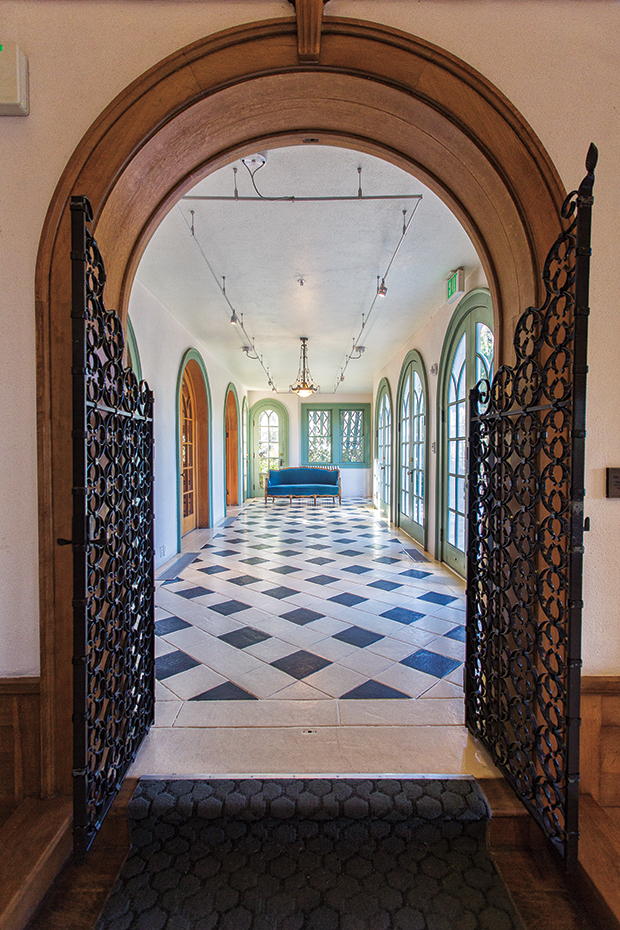 Built as a residence on the banks of the Colorado Rived in 1916, Laguna GLoria is now home to an art museum and art school.

You could easily get a crick in your neck from looking up at Tom Friedman’s stainless-steel sculpture Looking Up. The 33-foot figure greets visitors to the grounds of Laguna Gloria, a splendid Italian-style villa built a century ago on the banks of the Colorado River in Austin by Clara Driscoll and her then-husband, Hal Sevier.

Any neck pain is worth it, though. Friedman’s towering wanderer is both magnificent and fragile, inviting us to contemplate the heavens above along with him. Installed in 2015, the eye-catching sculpture reflects the latest chapter for the lakeside villa, which today houses The Contemporary Austin—Laguna Gloria, an art museum.

Clara was born in 1881 in St. Mary’s (a bygone town on Copano Bay), the granddaughter of Irish Catholic pioneers who fought in the Texas Revolution. The heir of the Driscoll family’s multimillion-dollar ranching fortune, “Miss Clara” was a philanthropist and preservationist with a deep appreciation for history and architecture. Today her legacy stretches across the state, particularly at Laguna Gloria, the Alamo in San Antonio, and the 1942 Robert Driscoll Hotel in Corpus Christi, which was remodeled in the 1970s and is now the Wells Fargo building.

Clara grew up on her family’s 83,000-acre Palo Duro Ranch near Corpus Christi. She “attained young girlhood with the bawl of a yearling in her ears and the smell of hot burning cowhide in her nostrils,” recounts Martha Ann Turner in her 1980 biography Clara Driscoll, An American Tradition. She handled a horse, a rifle, and a lariat with equal proficiency and claimed she could do most anything her father’s ranch hands could.

By the age of 18, Clara had already spent 10 years studying in Paris and had returned to Texas, giving up her riding clothes in favor of the latest French fashions. Clara’s time abroad spurred her profound respect for the history and culture of her native land, and she was appalled by the widespread indifference to the crumbling ruins of the sites of Texas independence, including the Alamo.

In 1903, Clara began working with Adina de Zavala and the San Antonio chapter of the Daughters of the Republic of Texas to preserve the Alamo. They succeeded in acquiring an option to buy the property, but when the Daughters were unable to raise the full amount in time, Clara paid the remaining sum with a personal check; over time she invested $75,000 into securing the Alamo’s future. The Daughters of the Republic of Texas were the primary caretakers of the Alamo from 1905 until 2013, when the Texas General Land Office took over that role.

Clara went on to work as a writer in New York, where she published a novel, short stories, and a Broadway musical. There she married Hal Sevier in 1906. Honeymooning in Europe, Clara fell in love with Italian architecture and with Italy’s Lake Como.

When the couple returned to Austin in 1914, Clara enlisted architect Harvey L. Page of San Antonio to design her dream house. Hal, a Texas legislator who founded The Austin American newspaper that same year, knew just the place for the villa—a 28-acre tract on the Colorado River at the base of Mount Bonnell. Clara christened her new home Laguna Gloria, Italian for “Heavenly Lagoon.”

Today, Laguna Gloria visitors can see evidence of Clara’s interests in the details of the three-story villa, with its stucco and masonry exterior, composed of rectangular blocks placed asymmetrically. A sculpted limestone window patterned after the Rose Window of Mission San José in San Antonio reflects Clara’s devotion to Texas history; a carved wooden wall panel above the fireplace, fashioned from one of the Alamo’s original rafters, depicts a scene from the battle, along with the state Capitol and the villa’s namesake lagoon.

Picturesque paths guide visitors through the landscaped grounds, where a Roman fountain, Venetian statues, and a Tuscan wishing well share space with recent contemporary sculptures. The museum offers tours of the villa and grounds at 1 p.m. on weekends, or you may wander at will.

President Franklin D. Roosevelt appointed Hal Sevier ambassador to Chile in 1933, but the couple’s first year in Chile saw unexpected political and personal upheaval, and they returned to Texas two years before the expiration of Sevier’s term. Upon their return, the couple divorced, and Clara reclaimed her maiden name. She moved to Corpus Christi, where she built the Robert Driscoll Hotel in memory of her late brother. 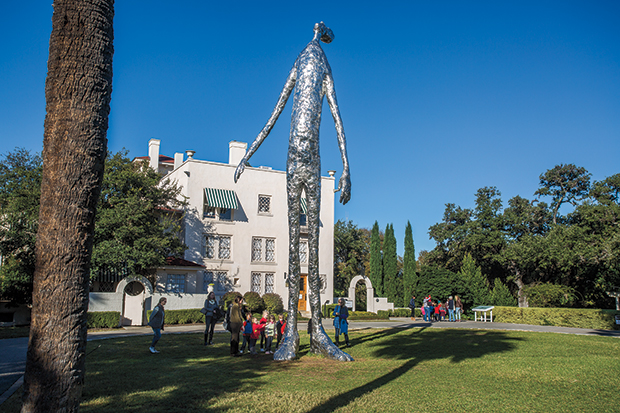 In 1943, Clara presented her beloved Laguna Gloria to the Texas Fine Arts Association for use as an art museum. Two years later, she died in her Driscoll Hotel penthouse apartment at the age of 64. She left the bulk of her $7 million fortune to provide for the construction and maintenance of the Driscoll Children’s Hospital in Corpus Christi, a clinic and hospital that still serves children.

Laguna Gloria lives on as home to a growing collection of global contemporary artworks, which share the 14-acre site with Old World pieces from Driscoll’s collection, including the Garden of the Four Seasons, an undated group of four concrete female figures depicting the seasons. Laguna Gloria is also home to the Art School, one of the largest museum-affiliated art schools in the country with nearly 600 classes a year for children and adults; the classes take place in studios overlooking the lake. “People love the juxtaposition of contemporary art with the historical site,” says Laguna Gloria Senior Site Director Judith Sims.

Most of Laguna Gloria’s artworks are displayed outdoors. On the villa terrace, the installation Lost Money, by Danish artist group SUPERFLEX, features 2,000 coins scattered and firmly attached to the concrete terrace. Representing the worldwide financial crisis of 2008, Lost Money keeps children busy trying to pick up the coins.

Paths lead to outdoor exhibitions and permanent installations. A wooded walkway that Driscoll christened “Lover’s Lane” beckons visitors along an oak ridge that ends at the Temple of Love, an open, classical pavilion overlooking a Lake Austin lagoon. The Gatehouse Gallery, a small sep-arate building, offers periodic shows of varied works that range from traditional paintings to sculpture.

Laguna Gloria has seen multiple changes over the past decade. In 1996, Laguna Gloria Art Museum changed its name to The Austin Museum of Art, which went on to merge in 2011 with Arthouse at the Jones Center. In 2013 the two entities adopted a new name—The Contemporary Austin. The Jones Center, located in downtown Austin on Congress Avenue, reopened in December after renovations.

Contemporary Austin Executive Director and CEO Louis Grachos says the museum is reshaping Laguna Gloria into an entity that reflects a broad spectrum of contemporary art through exhibitions, educational programs, and its collection of outdoor sculptures. “Through works created by living artists,” Grachos adds, “we can connect visitors to the visual arts in a manner that speaks directly to Clara’s wishes for this very special property.”

Plans for the site include the exhibition of new works by leading contemporary artists (don’t miss Tom Sachs’ whimsical Miffy Fountain, which bears a resemblance to Hello Kitty) and work to remove invasive plants, create space for new outdoor sculptures, and stabilize the extensive shoreline. Special events, such as “Drift-In Theater” movie screenings on the lagoon, make the most of the museum’s location.

Art fans can thank Miss Clara herself for Laguna Gloria’s sun-washed setting, where lawns near the villa contrast with areas of deep shade found along curving paths. Here, benches offer a place to rest beneath the branches of centuries-old live oaks. Laguna Gloria’s gardens, designed by Clara 100 years ago, complement the natural woodlands, meadows, and riverbank, beckoning visitors to wander among engaging works of historic and modern art.