It was a case of mistaken identity. I thought I was Wendish, a descendant of that group of Eastern Europeans who fled religious oppression by the Prussian government in the 1850s. 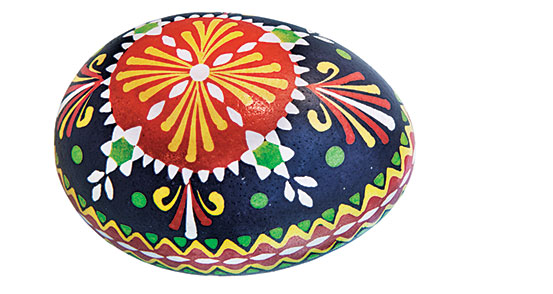 The Wends battled cholera as a three-masted clipper called the Ben Nevis carried them across the Atlantic to Galveston. Yellow fever drove them farther inland, and they trekked by foot to present-day Lee County, eventually forming the town of Serbin.

But genealogical research revealed that though a relative was the first teacher at the Wends’ Lutheran school in Serbin, he wasn’t actually Wendish, and so neither am I. Nonetheless, my recent foray into Wendish culture left me with an artful memento—a midnight-blue hollow Easter egg, vibrantly wax-batiked with flowers, crosses, and other artistic flourishes.

In contrast to the vinegar-based dyes most of us use to color Easter eggs, the Wends have elevated the egg-decorating process to an art. My intricate egg was designed with a goose feather; artisans applied wax and dyes in stages, yielding a multi-hued egg with lots of fine detail.

I chose the egg when I visited Serbin last September for the annual Wendish Festival. During the event, artisans demonstrate traditional Wendish skills like making sauerkraut, baking coffee cake, and decorating Easter eggs. After watching several egg artisans at work, I could see that the intricate art of egg decorating takes great patience. So I bypassed a how-to book and instead browsed the jewel-toned array of eggs for sale. These imported beauties were created in Leipzig, Germany, where ar-tisans continue to practice the art form handed down from their ancestors.

The festival also gave me the chance to explore the Wendish Heritage Museum, housed in a collection of buildings that include a white-frame parochial schoolhouse built by the Wends in 1915. Displays of traditional Wendish clothing include delicately crocheted baptismal caps, a red-and-green striped folk dress, and an austere, floor-length wedding dress. Until the late 19th-Century, I learned, Wendish brides wore uncomfortable black wedding dresses to symbolize the suffering of marriage.

At the front of the central room, a handmade model of the Ben Nevis recalls the difficult trans-Atlantic journey. A German-language newspaper and lavishly embellished baptismal and confirmation certificates provide more insight into Wendish life. In a side room, The Lillie Moerbe Caldwell Memorial Library provides genealogical research material with rare Wendish and German books, personal papers, and photos.

Outside, visitors can see two log cabins built in the 1850s, as well as antique farm equipment. At first, I learned, the Wends tried to grow wheat and rye, which had flourished in their homeland of Lusatia, but eventually replaced those crops with corn and cotton.

Later in the day, after the annual Wendish coffee-cake contest, I toured the beautiful St. Paul Lutheran Church, which was built in 1871 and is known as one of the “Painted Churches of Texas.”

The church’s plain, white-stucco exterior stands in contrast to the colorful interior. The significance of the vibrant blue ceiling has several interpretations. Religious sources suggest that the color symbolizes heaven, while folklore claims that blue ceilings drive away evil spirits and mosquitoes. A balcony wraps around the building’s interior, providing two levels of seating; in the church’s early years, women and children sat on the ground level while men sat in the balconies. A 20-foot pulpit is among the tallest in Texas, and faux-marbled columns and gold-stenciled flourishes provide additional artistic flair.

Back at home, I stashed my egg in a safe place. Wendish or not, I still smile each time I glimpse that colorful creation—it carries hard-won lessons of perseverance and faith, important qualities both in the 19th Century and the 21st.