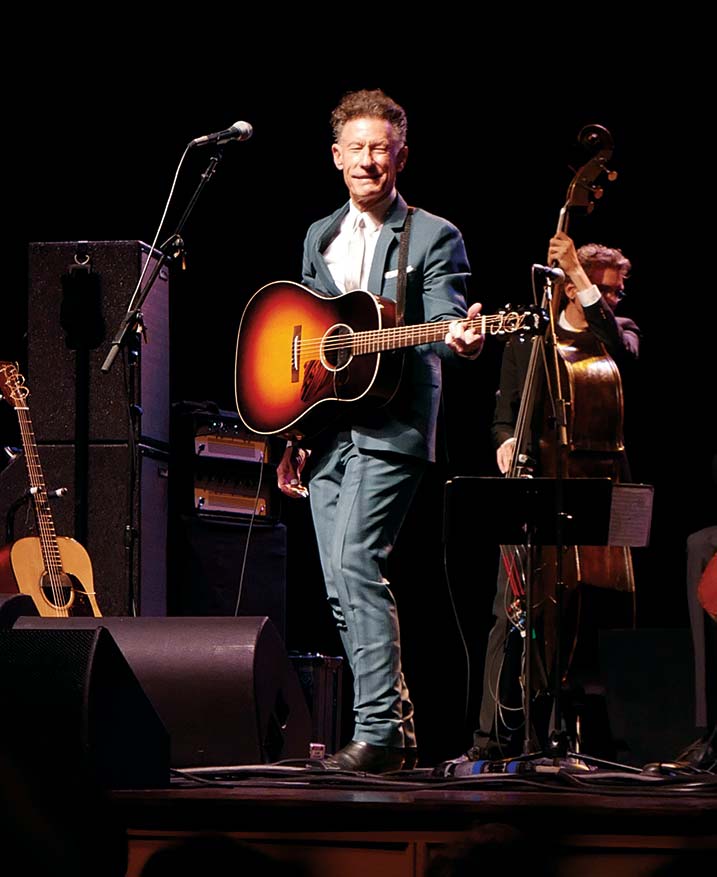 A spotlight pierces the darkened theater as an acoustic guitarist fingerpicks the opening notes of a tune. Tonight’s star, nattily clad in a dark teal suit, white shirt, and silver necktie, stands center stage. He begins to articulate the lyrics with wry precision as the lighting gradually expands to reveal his supporting players, each attired in a black suit, white shirt, and tie. Despite the ensemble’s snazzy look, this singer-songwriter’s material evokes imagery of pick-up trucks, cowboys, enchiladas, and other down-home delights. That’s right—he is from Texas.

As applause fades following another song, Lyle Lovett flashes his crooked smile. “Thank you,” he says. “It’s good to be back home.”

While actually born and raised just north of Houston, the 57-year-old Lovett is clearly at home on stage at The Grand 1894 Opera House in Galveston. Later in the evening, the multiple-Grammy Award winner pauses between numbers, surveys the three tiers and 12 boxes of the sold-out house, and proclaims, “This is one of my favorite theaters in the whole world. It’s all so perfectly done. It’s just a special place.”

Indeed, the 120-year-old venue—commonly known as The Grand— is extraordinary in many ways. Noted for its Victorian interior design and vintage architectural details, this icon of the island city’s downtown cultural arts district has a multifaceted history—the backdrop, so to speak, to the diverse programming it offers today.

In some respects The Grand is also kind of like Lyle Lovett—or at least his genre-defying yet distinctively Texan music and artistic persona. Both combine a certain refinement with an earthy charisma, a sense of class infused with folksy grace. 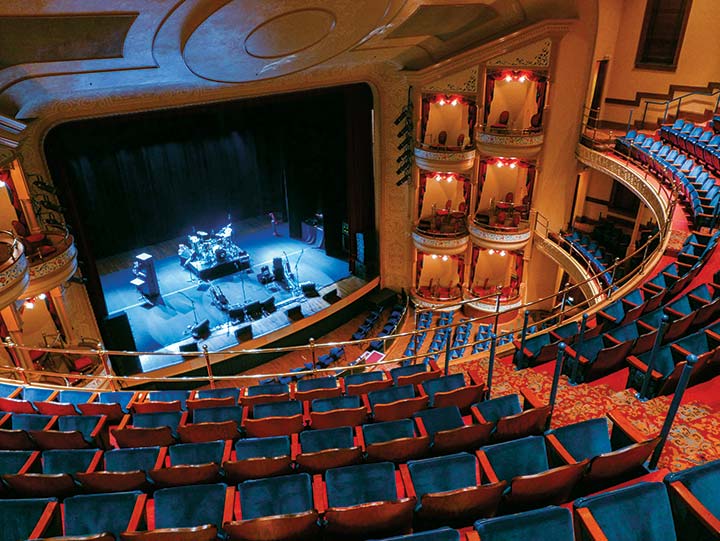 For instance, as Maureen M. Patton, a Galveston native and the longtime executive director of The Grand, points out, “It’s called an opera house, but that was just the term people used in the 19th Century for any kind of performing arts theater. Everything has been staged here, from classical to popular, professional to amateur.”

“Everybody from John Philip Sousa to Willie Nelson to Itzhak Perlman and Liza Minnelli has made music here,” Patton says. She drops other legendary names to illustrate the venue’s eclectic legacy: the actresses Sarah Bernhardt and Lillian Russell, the actor Lionel Barrymore, the renowned turn-of-the-century politician William Jennings Bryan, the prima ballerina Anna Pavlova, and the Marx Brothers comedy team. “There are so many stories here,” she says.

The primary story begins in the late 19th Century, a period when Galveston reigned as the state’s largest city and one of the nation’s major ports. Local prosperity prompted a group of 15 businessmen to invest in theater impresario Henry Greenwall’s proposal to build a prestigious facility to replace the city’s original 1871 Tremont Opera House. Designed by New Orleans architect Frank Cox in a round-arched Romanesque style, Greenwall’s new edifice housed a four-story hotel as well as an elegant auditorium that originally had over 1,500 seats. The first show staged there, a drama called Daughters of Eve, premiered on January 3, 1895. For the subsequent 69 months, the theater flourished as the finest performance venue in Texas.

Then came the event that Galvestonians still refer to as the Great Storm of 1900, the nation’s deadliest natural disaster to date. The cataclysmic hurricane inflicted severe structural damage on the building, destroying the back wall and roof, along with a crowning cupola that has never been replaced. Nonetheless, by October 1901 sufficient repairs allowed performances to resume, and a template for post-disaster comeback had been established—for both the theater and the city.

In the early decades of the 20th Century, The Grand endured other tempests and remained a celebrated stage for live performances. However, with the advent of Hollywood, a new owner transformed the venue in 1924, and for most of the next 50 years, the building served as a movie theater. Eventually, the once grand structure suffered the indignities of numerous unfortunate alterations, such as the installation of linoleum floors, and deferred maintenance. By 1974, the deterioration of the facility mirrored that of its then-seedy downtown environs, and the old movie house closed.

Yet what might have been The Grand’s finale instead laid the foundation for its renaissance—and that of its neighborhood. The Galveston County Cultural Arts Council purchased the structure in 1974 and raised funds to secure the leaky roof and restore the stage. Later, it began stripping out inappropriate mid-20th-Century modifications, including the linoleum flooring, dropped ceilings with fluorescent lights, institutional carpet, and poorly painted woodwork. The gradual reclamation of the building and replacement of original features continued through the 1980s, and when the Cultural Arts Council dissolved in 1986, The Grand became an independent nonprofit organization.

Since assuming her directorship in 1981, Patton has worked with San Antonio preservation architect Killis P. Almond to guide The Grand through a series of meticulous restoration projects that have renewed not only the physical structure but also the venue’s prestige as a performing arts space. The Grand now presents approximately 40 professional productions per year, and serves as the home of the Galveston Symphony Orchestra. Moreover, other cultural arts troupes from across the region regularly lease the facility for their own shows.

Apart from its antique beauty and sophisticated lighting and sound systems, a major appeal of this now 1,040-seat theater is its profound sense of intimacy. No seat is farther than 70 feet from the proscenium.

“I love playing a historic venue like The Grand,” Lovett explains following his performance. “I live in a house that was built in 1911, and I appreciate the charm and character of old things. But what really makes it special is the configuration of the room. It’s designed in such a way that every seat in the house feels close to the stage.”

However, for many Galvestonians, The Grand’s legacy transcends the aesthetic allure of exquisite woodwork, walls decorated with floral-pattern stenciling, plush stage curtains, or shiny brass railings—or for that matter, even the quality of the entertainment it provides. As Patton notes, “We are a big economic driver for this community because 80 percent of our audience comes from out of town.”

Furthermore, as evidenced by its reopening just three months after Hurricane Ike flooded the place with nine feet of water in 2008—destroying flooring, seats, a Steinway Grand piano, and more—The Grand has also come to symbolize Galveston’s ongoing commitment to renewal in the wake of disaster.

“The story of The Grand is that she’s a survivor, and she’s survived a lot of things: storms, downturns in the economy, neglect,” Patton says. Today, prominently located near the finest restaurants and bars in Galveston’s revitalized downtown, The Grand thrives—its stately presence a reminder that the show must go on.