Getting to the bottom of the Billy the Kid myth 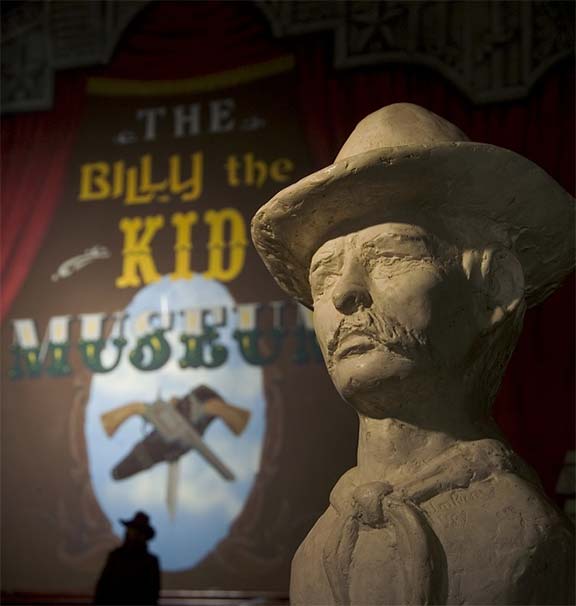 Billy the Kid, one of America’s most notorious gunslingers and Wild West frontier outlaws, was shot dead in New Mexico in 1881 by Lincoln County sheriff Pat Garrett. Or was he?

Explore Hico, a destination for rest and relaxation.

Folks in Hico, Texas, have long asserted that instead of meeting his maker at the end of a bullet, Billy the Kid lived his final years peacefully in Hico under the name of William Henry Roberts. Though she’s no private investigator, Senior Editor Lori Moffatt tries to get to the bottom of the story in an interview with Sue Land, the longtime director of Hico’s Billy the Kid Museum.

TH: OK. I’ll cut to the chase. Did Billy the Kid not perish at Fort Sumner, New Mexico, as most stories purport?

Sue: No, we believe he did not. We believe that Billy the Kid, going by the name of William Henry Roberts or “Brushy Bill,” lived in Texas since 1883, working in Wild West shows, training mustangs for the Rough Riders, picking up odd jobs. He lived here for the last 17 ½ years. Folks around here who knew Billy when they were kids say that he always wore chaps, a big hat, and a kerchief. He never let his wife walk beside him, as he was always afraid there was a price on his head. In December 1950, a few days short of his 91st birthday, Billy the Kid died of a heart attack on the street, right behind Jersey Lilly’s Mexican restaurant on Pecan Street.

Sue: Well, when the shootout with Pat Garrett took place in New Mexico, it was July 1881. That is true. But it was not Billy who was shot and killed; it was another man. Many reports say that when Pat Garrett shot the man in the back, he walked right past the body and did not look. One of the deputies said, “You’ve shot the wrong man.” There was another person on the scene who said, “You’ve killed my boy.” That person was not Billy’s father.

The shootout took place at a ranch house owned by a fellow named Pete Maxwell. Maxwell’s sister Paulita was sweet on Billy, and Billy was sweet on her. We believe that Billy came to say goodbye and that’s when Pat Garrett ambushed him and shot the grown fellow. The young man they buried as Billy the Kid had a dark beard, but Billy had only peach fuzz. Many people swore on affidavits over the years that Billy the Kid wasn’t dead.

TH: What evidence do you have that Billy lived in Hico all these years?

Sue:The best evidence we have comes from this story: Prior to 1950, there was a private investigator in Florida by the name of Morrison, who was hired by a former outlaw and gunman named Jesse Evans. Jesse, who had ridden with Billy the Kid in a posse called the Regulators, wanted Morrison to prove that he was indeed Jesse Evans so he could inherit some property in Florida. Morrison proved it, and the Florida courts gave Jesse the estate. In the course of working out the details, Jesse Evans told Morrison where he could find Billy the Kid. He told Morrison that he was in Texas, and told him about another man named Daniels who could tell him exactly where Billy was living and under what name.

TH: This is sounding very complicated.

Sue: Yes. And in those days, there was no Internet, no cell phones. It was hard to identify a conspiracy. But Morrison contacted Daniels, who told Morrison that Billy the Kid was alive and well and living in Texas under the name of Brushy Bill.

Morrison tried to talk to Brushy twice. Brushy Bill would not talk to him. On the third try, Brushy told Morrison to wait until his wife had gone shopping; then he would talk to him. See, Brushy had never told his wife about his true identity. So when Morrison came back, Brushy said he would talk if Morrison could help him get the pardon promised to him by New Mexico governor Lew Wallace, who hadn’t kept his end of a bargain. See, Billy had helped imprison some other criminals, but instead of receiving a pardon, the local law said he would be hanged. So Billy escaped and shot dead his guards. That’s when the price was put on his head.

Sue:Billy never did receive his pardon. But at some point, Morrison examined Brushy’s body and saw that some of Brushy’s scars matched those that Billy was known to have had. He believed him at that point, and took Brushy to New Mexico. Brushy was able to name places and identify things that only Billy the Kid could have known.

The only real way to prove it would be to do a DNA study; we could take DNA from Brushy Bill’s bones, but we don’t have a precedent to do that. But over in New Mexico, the cemetery where Billy was supposedly buried has flooded, and back then they used wooden caskets. So New Mexico has no body.

Sue: Yes. Come on out to the Billy the Kid Museum and we’ll show you around.