Sinister Santa: A Look at the 1927 Cisco Bank Robbery 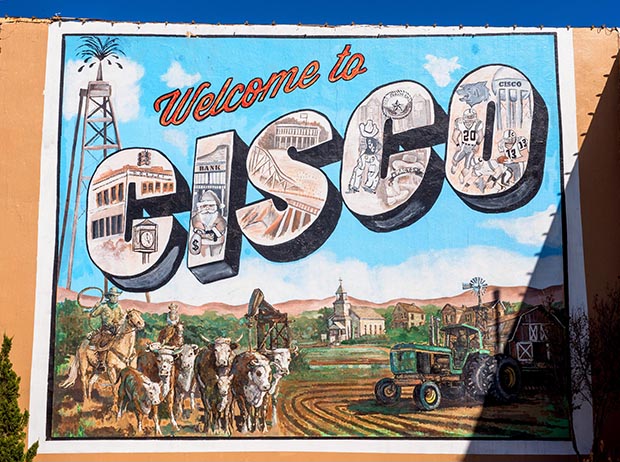 Cisco’s downtown was bustling with Christmas shoppers on Dec. 23, 1927. One was college student Lela Latch, accompanied by her younger brother Bill. In a television interview decades later, she recalled that Bill, age 6, approached a man dressed as Santa Claus to declare his Christmas wish– a football in a nearby store window.

Though Santa assured Bill he would eventually get the football, the man had more immediate plans. He was an ex-convict named Marshall Ratliff who would use the Santa Claus disguise to rob Cisco’s First National Bank. In minutes, the downtown area was engulfed in gunfire between Ratliff and his accomplices, Cisco police, and dozens of citizens who grabbed firearms and joined the fray.

A Texas Historical marker on the building the bank once occupied summarizes the events with clarity and brevity: “Costumed Santa and three fellow bandits looted bank of $12,000 cash, $150,000 in securities. They escaped through gun battle with two little girls as hostages. A three-day manhunt followed. The children and money were recovered; the robbers captured. Six persons were killed, eight injured. Later a mob lynched ‘Santa’ when he broke out of jail.”

The girls, ages 10 and 12, were released several miles outside Cisco when the gang abandoned the escape vehicle, which was low on gas, riddled with bullets, and hobbled by a flat tire. The girls would later testify against Ratliff, as would a resourceful teenager whose family car Santa’s henchmen attempted to steal. The 14-year-old surrendered the car but ran away with the keys. When his assailants realized the keys were gone, they switched back to the original car, but left the cash and securities behind, as well as a dying coconspirator.

Another youngster, age 6, also played a key role that day. Francis Blassengame urged her mother to follow “Santa” into the bank, only to find pistols drawn. Mrs. Blassengame pulled her daughter into the bookkeeping office, warning employees what was happening. She shoved her daughter out a back door to an alley and then ran to Cisco’s police station, ignoring warnings to stop.

Police Chief G. E. “Bit” Bedford responded. He was killed, as was Deputy George Carmichael, while stalling the bandits’ escape. Citizens attributed their deaths to their valor and outsized frames.

The Santa Claus saga is ingrained in Cisco’s lore, enhanced by a book-length treatment by famed Texas author A. C. Greene in the 1970s. Before that, First National did its own account in a brief paperback. A play about the robbery was performed for several years by the Cisco College Dinner Theater.

“We moved to Cisco just before I started first grade in 1968,” says Dixon Seider, curator of the Conrad Hilton Center, housed in what was the first hotel purchased by Hilton. “I can remember stories floating around as long as I can remember.” In the Hilton Center’s museum are bullets used in the chase of the robbers, the handcuffs fastened to Ratliff after he was captured, the original bank clock by which “Santa” was standing before the robbery, and the lollipop-type scales that were in First National’s lobby.

In an interesting twist, the old City Hall and police station where Mrs. Blassengame alerted Chief Bedford is now the Lela Latch Lloyd Museum, named for the revered school teacher who was outside the bank with her brother as the robbery began. Preserved by historian Dr. Duane Hale are copies of newspaper accounts, a Texas Banking Association poster of that era offering of a $5,000 reward for any of the dead bank robbers, and a drainage pipe with bullet holes from the robbery scene. His booklet, The Great Santa Claus Robbery and Its Impact on Eyewitnesses, contains some of the last first-hand recollections of Cisco’s citizenry when it was published in 2000.

Prosperity Bank, the corporate successor to First National, doesn’t shy away from the Santa Claus history. Now in a modern building a couple of blocks away from the its original location, the bank displays the works of the late western artist Randy Steffen. Among Steffen’s watercolors is a depiction of the robbery, with one of the young girls who became a hostage in the foreground.

More impressive in Prosperity’s lobby is Steffen’s 45-foot mural of Cisco’s history, a portion of which alludes to the robbery. In the panorama is a rendering of First National’s original building and the getaway car, with Santa in the front seat.

It evokes the dark tale of mayhem that could have been slapstick if not for the loss of life of the officers, the ancillary carnage of others, and the illegal lynching of Ratliff. Perhaps that was artist Steffen’s conclusion because, above the illustration of the robbery in the mural, there is a ghost-like and foreboding image of a somewhat malevolent Santa Claus hovering in the sky.