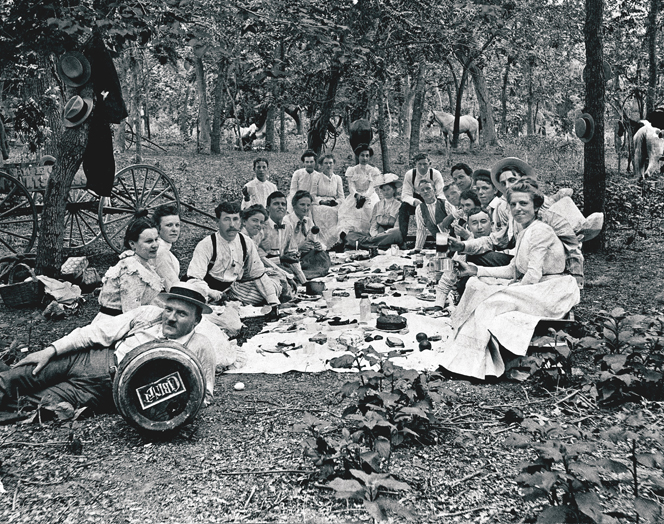 A group of German-Texans picnic on the banks of Salado Creek near San Antonio in 1901. (Photo courtesy of Institute of Texan Cultures/Vic Fritze)

Since its beginning in 1968 as the Texas Exhibits Hall for San Antonio’s HemisFair, the Institute of Texan Cultures has showcased the artifacts, photographs, and stories of diverse groups reflected in the state’s heritage, from Paleoindians to Polish-Americans. Its best-known event, the Texas Folklife Festival—at which represent-atives of more than 40 cultures cook, demonstrate, dance, and otherwise entertain spectators—attracts thousands each June. However, other Institute offerings have been overlooked or underused in recent years. That’s about to change.

With the University of Texas—San Antonio, the Institute’s parent institution, on track to become a national research university, it has shown new interest in developing the Institute’s resources. Several new staff members came aboard last year, revitalizing the museum’s educational efforts. A portion of the historic photo archive has been digitized for online browsing, and researchers are producing oral history podcasts available for download. In January, a new gallery for traveling exhibits opened on the first floor. The first exhibit—RACE: Are We So Different?—explores the science, history, and everyday experience of race perceptions. The Institute is hosting moderated “RACE Forums,” as well as a RACE lecture series, to encourage discussion about the exhibit.

Museum staff have begun revamping some of the permanent exhibits, emphasizing the interactions between various cultures, rather than presenting individual groups in isolation. They’re also incorporating more of the museum’s vast store of historical photos and oral histories. “Our photo archive and oral history collection are really hidden treasures,” says Director of Education and Interpretation Lupita Barrera. “We have more than three million photos, and hundreds of oral histories from Texans such as Robert Hugman, the architect of San Antonio’s River Walk, musician Flaco Jiménez, and cowboy and rodeo clown Leon Coffee. We’ve also heard from prominent businessmen, Doolittle’s Raiders, and civil rights leaders. We’re incorporating these elements into our permanent exhibits to bring Texas history to life for our visitors.”

On January 28, the Institute celebrated an important milestone: It became an affiliate of the Smithsonian Institution in Washington, D.C. “This affiliation is a really big step for us,” says Institute Executive Director Tim Gette. “It gives us access to the Smithsonian’s collections, traveling exhibits, experts, education-al programs, and other resources.”

After the ceremony formalizing its partnership with the Smithsonian, the Institute held a naturalization ceremony for 238 new citizens from more than 50 countries, from Albania to Vietnam. A military brass band played marches, and the R.O.T.C. color guard from a local high school carried in American and Texas flags. After presiding District Judge Xavier Rodriguez administered the Oath of Allegiance, there were tears, hugs, and handshakes. Children waved small American flags. The assembled group of new citizens and well-wishers then said the Pledge of Allegiance and sang “The Star-Spangled Banner.”

The Institute hosts similar naturalization ceremonies about 10 times a year. They tend to involve more fanfare than the ceremonies held elsewhere across the state, perhaps because Judge Rodriguez, who was born in Monterrey, Mexico, is a naturalized citizen himself and fully appreciates the significance of the occasion. The setting also lends itself to extra celebration.

“These naturalized citizens are our newest Americans, and we also think of them as our newest Texans,” says Public Affairs Specialist James Benavides. “Since our purpose is to educate visitors about the many cultural groups that came together to build this state, the Institute seems the perfect place to hold this ceremony. Many of the ethnic groups represented on our exhibit floor are represented in the audience gathered for the ceremony. We want them to know that their people have contributed significantly to the history, culture, and character of this state.”

Museum staff have this same goal for every Texan who visits the museum, including virtual visitors. “We think the Institute should be a place for Texans to discover themselves,” says Lupita Barrera, “and by making all of our resources more available—both on-site and online—we’re helping them do that.”