Written by Art Williams, Photographs by Kevin Stillman | From the April 2015 issue | Updated: March 17, 2015 | Filed Under: Culturemade in texas 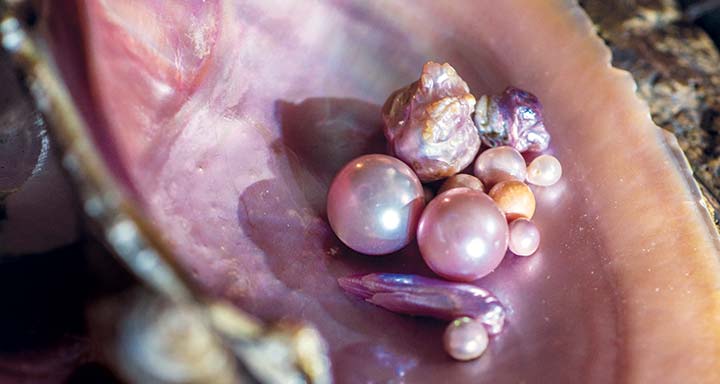 Francisco Vazquez de Coronado famously failed in his 16th-Century quest to find the fabled Seven Cities of Gold. But legend has it that his expedition across the American Southwest turned up a gemstone that’s still treasured by Texas jewelers today: Concho River pearls.

The San Angelo Convention & Visitors Bureau operates a visitor center at 418 W. Ave. B. For travel information, including lodging and activities, call 800/375-1206.

Unlike the round, white gemstones normally prized for pearl jewelry, the pearls produced by a family of mussels in the Concho River around San Angelo come in irregular shapes and colors, ranging from light pink to lavender and deep purple.

Priest’s shop, Legend Jewelers, is one of six San Angelo jewelry stores, all locally owned, that craft and sell jewelry with Concho pearls, accenting them with silver, gold, or diamonds in rings, pendants, and earrings. The city also honors the pearl with Pearl of the Conchos, a sculpture set in the middle of the Concho River, in front of the San Angelo Museum of Fine Arts. The bronze by the late Jayne Charless Beck depicts a life-size mermaid holding a shell with a Concho pearl in her outstretched hand. The museum is on San Angelo’s River Walk, which stretches about four miles along the Concho through parks, an amphitheater, and places for fishing and boating.

“Whether for tourists or locals, the pearls are in demand as both souvenirs and as gems,” says Janette Sloper of Sloper Jewelry, which sells some pearl jewelry but does most of its business making jewelry for other retail shops.

Concho River pearls are found only in the Tampico pearlymussel in the Concho River, its branches, and its reservoirs. All mussels are capable of producing pearls, but the Tampico is slightly more prone to producing pearls, with about four in 100 making pearls, says Marsha May, an aquatic biologist with the Texas Parks and Wildlife Department’s Texas Mussel Watch project. Mussels produce pearls by coating foreign objects that fall in their shell with nacre, the same pearly substance on the inside of their shells. The reasons that Tampico pearlymussels create more or different pearls than other mussels are not known, May says.

The supply of Concho pearls has diminished over the years under pressure from persistent drought and reduced water levels, as well as pollution from various sources. Texas Parks and Wildlife began requiring licenses for commercial mussel collection during a surge in interest in the 1980s. Today, there are only eight licensed commercial musselers in the state, and only some of those still collect pearls, May says. Because native, freshwater mussels in general are declining, the state quit issuing commercial collection permits in 2006, and the department has no plans to authorize more.

But then, pearling is a difficult business anyhow. Local waters are murky and hard, with lots of caliche and other minerals; pearlers find mussels by walking in three to four feet of water and feeling for the shells with their toes. In the process, they confront rattlesnakes on the banks, and water moccasins and snapping turtles in the water. Sloper describes pearlers as secretive, “closed-mouth guys who don’t talk about where they get their pearls.”

What pearls they do find, they sell to the local jewelers for what amounts to little more than beer money. Most of the pearls that are harvested turn out to be too small or too ugly to be used in jewelry. Priest figures he buys no more than 500 annually.

San Angelo’s small pearl industry traces its roots to Bart Mann, a custom jeweler who found thousands of pearls in the late 1950s and kept them around as curiosities before starting to design jewelry that developed an internation-al following.

Pearl hunters descended on San Angelo from around the state to search for the gems, and a specialized new industry was born. Today, nearly every jeweler in San Angelo who deals in Concho pearl jewelry has personal or family ties to Mann’s early operation.

Priest, a Mann protégé whose spacious downtown store offers the largest selection of Concho pearl jewelry in town, said the first thing he looks for in pearls are matching stones, which are good for earrings. Once he’s separated those out, only about five percent of the remaining pearls are nice enough to use in jewelry. He says he pays from “$50 to $5,000” for each pearl, based on luster (the shinier the better), color (rich, deep purple is most in-demand), shape (both spherical and irregular can be valuable), and size (the biggest ever found was 13 millimeters in diameter, though most are one-tenth that large).

Because each pearl is unique, jewelers custom-design around the pearl, rather than trying to fit the gems into fixed pins, pendants, and rings. Sloper says that to her knowledge, only two strands of spherical Concho pearls have ever been strung, and she has the only one available for purchase. It took her late father, who also entered the business working for Mann, 20 years of collecting Concho pearls to gather enough round pearls to make the 16-inch strand.

More than a few mysteries remain about the pearls. Most jewelers generally attribute the pearls’ size and shape to the mineral content in the Concho River and/or the hereditary traits of the Tampico mussel. Cheryl Dorner—whose father, Chester, opened Chester Dorner Jewelry downtown in 1963—has held onto a pearl for 25 years that she swears looks just like three angels. “I still can’t decide what to make out of it,” she says.

Priest has one pearl that looks like a cylinder with a point on the end. “I’ve never seen one like this,” he says, holding it up, “so it will ahve to go into something special.” But how it got to be that shape in the first place, only Mother Nature knows ––and she’s not talking.