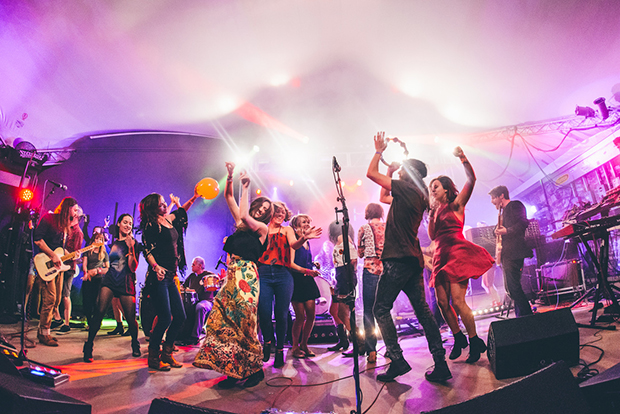 There are more than 2,000 bands from all over the world performing at SXSW Music in Austin this year, and there’s definitely something for fans of every genre imaginable. A goodly portion of the bands showcasing at the festival hail from Texas. If you’d like to take a road trip through the Lone Star State at this year’s festival, we’ve compiled an itinerary that demonstrates this great state’s musical and cultural diversity.

SXSW Music Festival runs from March 13-19 is one of the most influential music industry events of the year.

Band hometowns featured in this story

The road to Austin starts in the farthest of far west Texas with two El Paso-based punk bands:  Le Butcherettes and Foxy Mojo. Fronted by agent provocateur Teri Gender Bender, whose ultra-feminine clothing belies a fiercely critical voice of society’s conventions, Le Butcherettes was originally formed in 2007 in Guadalajara and quickly made a name for itself in the Mexican underground scene. You’ll never know what you’re going to get from a Butcherettes show, but past performances have included fake blood, pigs’ heads, and a metric ton of attitude. All-male quartet Foxy Mojo has only been together for a year, but the label-less Brit-punkers have already charted a promising-looking trajectory for themselves.

Now let’s hop onto I-10 east and skirt the border until we get to Van Horn, then head south on US-90 to Marfa, the sometimes-home of RF Shannon, whose high-lonesome bluesy alt-folk fits right in with the mystical remoteness of this historical high desert town.

This was just a quick stop, so we’ll take US-67 through Alpine and back onto I-10 for the five-hour drive to San Antonio, the home base of a quartet of artists who exemplify this city’s rich culture and history. Lisa Morales, one half of the Sisters Morales, has made a name for herself as a solo singer-songwriter act, telling stories on her album, Beautiful Mistake, in English and Spanish about love and loss.

A couple of hours down the road is Corpus Christi’s El Dusty, a DJ who has pioneered the art of Cumbia-influenced South Texas “barrio anthems.”

Let’s hit the road again, heading east to the Houston/Gulf Coast area, where we will first check in on Amber London, a young rapper who has harnessed the internet to boost her old-school aesthetic. There’s also Grammy winning-R&B keyboard player Robert Glasper, whose 2016 Columbia Records release, Everything’s Beautiful, is a tribute to Miles Davis. (Glasper also served as the musical supervisor and composer for the 2015 documentary, Miles Ahead.) New Orleans transplant Vockah Redu brings the fine art of sissy bounce to SXSW stages; hydration and strong booty muscles are recommended. Finally, Khruangbin, a trio comprising bassist Laura Lee, guitarist Mark Speer, and drummer Donald Johnson, elegantly epitomize the melting pot that is Houston with their Thai funk-inspired surf soul.

Our music tour of Texas-based SXSW artists takes us behind the Pine Curtain to Tyler, where Paul Cauthen spins gritty country-gospel tales, a fitting counterpoint to the squeaky-clean power pop of sibling-led outfit Eisley. These emissaries from Northeast Texas perfectly encapsulate the intersection of the rural and the cosmopolitan in Tyler.

A couple of hours northeast on I-20 awaits a buffet of interesting artists from across genres. From Fort Worth hails War Party, a garage-band quartet.

Representing Dallas is Imaj, a country-western artist and the daughter of Philip Michael Thomas (Tubbs of Miami Vice fame). The Roomsounds give the Drive-By Truckers a run for their money in the Southern rock department, while Lady Lotion lays claim to the title of Dallas’ “Blues Queen.” Doug Funnie reps the  nerdcore scene, spinning r&b-inflected hip-hop about pop culture, history, and science.

Finally, let’s head down I-35 to Austin, our final destination and the home of a handful of bands that best represent this quirky, growing city.  There’s Los Coast, a buzzy two-year-old psych-soul outfit that embraces many influences, from gospel to punk. Molly Burch, a smoky-voiced singer-songwriter whose debut, Please Be Mine, is generating lots of heat in the Capital City. Another local favorite act is Southern psych-rock outfit Bright Light Social Hour, which manages to be both politically engaged and fun-loving at the same time. Quirky techno outfit Capyac has its origins in a local high-school jazz band. Finally, Bonnie Whitmore represents the Nasty Woman contingent with her country-tinged feminist torch songs.

As we all know, Texas is a big state with many, many different taste and points of view. While it would be impossible to enumerate the hundreds of Texas bands showcasing at SXSW, here’s hoping this fanciful little road trip will yield your next favorite artist, or maybe even introduce you to someone totally unexpected and new.