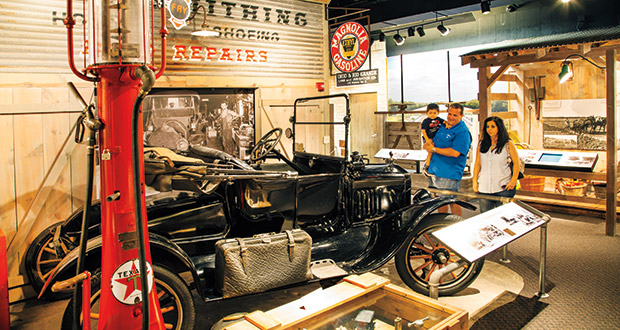 Three exhibit areas chronicle the heritage of the Rio Grande Valley from the Cretaceous Period to the present day.

The first words out of my son Byrdie’s mouth when I pick him up from school are usually, “Did you know that… ?”, followed in turn by the latest astonishing facts he’s discovered in kindergarten that day. Lately, he’s been interested in history—especially dinosaurs and ancient civilizations—and so my wife Laura and I decided it would be a good time to take him and his sister Ana to the Museum of South Texas History, which chronicles the heritage of the Rio Grande Valley from the Cretaceous Period to the present day.

Situated on a corner of Edinburg’s downtown square, the museum opened in 1967 in the century-old Hidalgo County Jail and has since expanded to include three main exhibit areas. With its white stucco walls, clay-tile roof, and picturesque 75-foot Great Tower—all characteristic of early 1900s Spanish Colonial Revival architecture—I had the sense of going back in time before we even stepped inside.

The time-travel vibe was only heightened when we passed through the native mesquite doors into the cavernous lobby directly beneath the tower. There, Laura and I found ourselves staring up at a massive chandelier, hand-crafted of steel and copper, and decorated with South Texas animal motifs. We couldn’t linger long, though, because Byrdie and Ana were already darting off to the aptly-named Grand Staircase, headed for the first exhibit hall.

After paying for our tickets, I caught up with the other three upstairs at the Reading Ranch, a sunlit library where kids can read while straddling a real leather saddle atop a cowhide rug. Appropriately, Byrdie was immersed in a picture book about cattle-driving vaqueros. But Ana was ready to go, so I followed her around the corner to Rio Grande Legacy, the museum’s bilingual signature exhibition.

I was just reading the introduction to part one (River Frontier, covering pre-history through the Spanish land-grant era) when I heard Ana emit a scream up ahead and then fall atypically silent. With her head upturned at a 45-degree angle, she regarded in wonder and a dash of fear the skeleton of an imposing mammoth that once roamed the Valley’s coastal plains along with bison, camels, and saber-toothed cats. She stayed frozen for 30 seconds or so, until her brother appeared beside her. “Just imagine,” he told her, sizing up the ancient mammal, “I might be able to fit inside its rib cage. Wow.”

“Come with me,” Ana said, tugging on his hand with renewed courage. “I know where the cool stuff is.”

By the time Laura and I could finish reading about the Coahuiltecan hunter-gatherers famously encountered by 16th-Century Spanish explorers, the kids had found a wooden chest beneath a sign that read, “Try on the replica breastplate and helmet and imagine yourself in the South Texas summer heat.” Soon, Byrdie was in full conquistador armor, while Ana played the part of a Spanish sea captain by showing off a dashing tricorne hat. “It is hot,” Byrdie informed me, as he used all of his strength to displace the helmet from his head.

From the militant opulence of the conquistadors—the room also included intricate scale replicas of three ships commanded by the explorer Alonso Álvarez de Pineda, perhaps the first European to set sight on Texas—we moved next to the Ranch Compound area, where we found an horno, the adobe bread oven used by Native Americans and later adopted by early European settlers. As the four of us reached out our hands, pretending to be warmed by the electronically blinking embers, I enjoyed a quiet interlude to reflect on the way that history is shaped by outsized personages and humble laborers alike, in moments of both conflict and convergence.

This theme was further developed as we moved into part two of the exhibition, River Highway, which focuses on the 19th-Century military campaigns that defined the Rio Grande as a border dividing two nations, and on the river’s role as a “highway” link-
ing the United States and Mexico together with the rest of the hemisphere. Byrdie and Ana skipped past the muskets and color-coded uniforms and headed straight to the impressive two-story replica steamboat at the center of the hall. They explored the boiler room and a model kitchen while Laura and I read about the boats that transported whiskey, textiles, figs, and tobacco up and down the Rio Grande—then much more grand than it is today—from the frontier outpost of Roma to the river’s “little mouth” at Boca Chica.

In the company of two fast-moving young children, our trip to a history museum—even one as thoughtfully designed as this one—could be a little disorienting, as centuries are compressed into a single room, and time hurtled by at breakneck speed with each advancing step. But I gained a degree of big-picture perspective, discovering unexpected connections between past and present and appreciating the courage and resilience of those who forged a better future for generations to come. Nowhere did I feel this more deeply than in River Crossroads, the final, 20th-Century installment of Rio Grande Legacy,
located downstairs in a separate wing of the museum. As Byrdie and Ana typed “m-o-m” and “c-a-t” on a real telegraph machine and ventured into a model packing shed to learn about the rise of commercial agriculture, Laura and I found ourselves captivated by the story of the Civil Rights pioneers who founded organizations including the American G.I. Forum, the Texas Farm Workers Union, and the Mexican American Youth Organization to advocate for equal rights, educational opportunities, and fair pay for all Valley residents.

As we left the exhibit hall, having completed our journey back to the present day, Byrdie was already looking ahead to the future. “So,” he began, as he reluctantly followed us in the direction of the exit, “when are we going to come back again?”