My Hometown: Artist Lindy Chambers Finds Inspiration Along the Backroads of Bellville 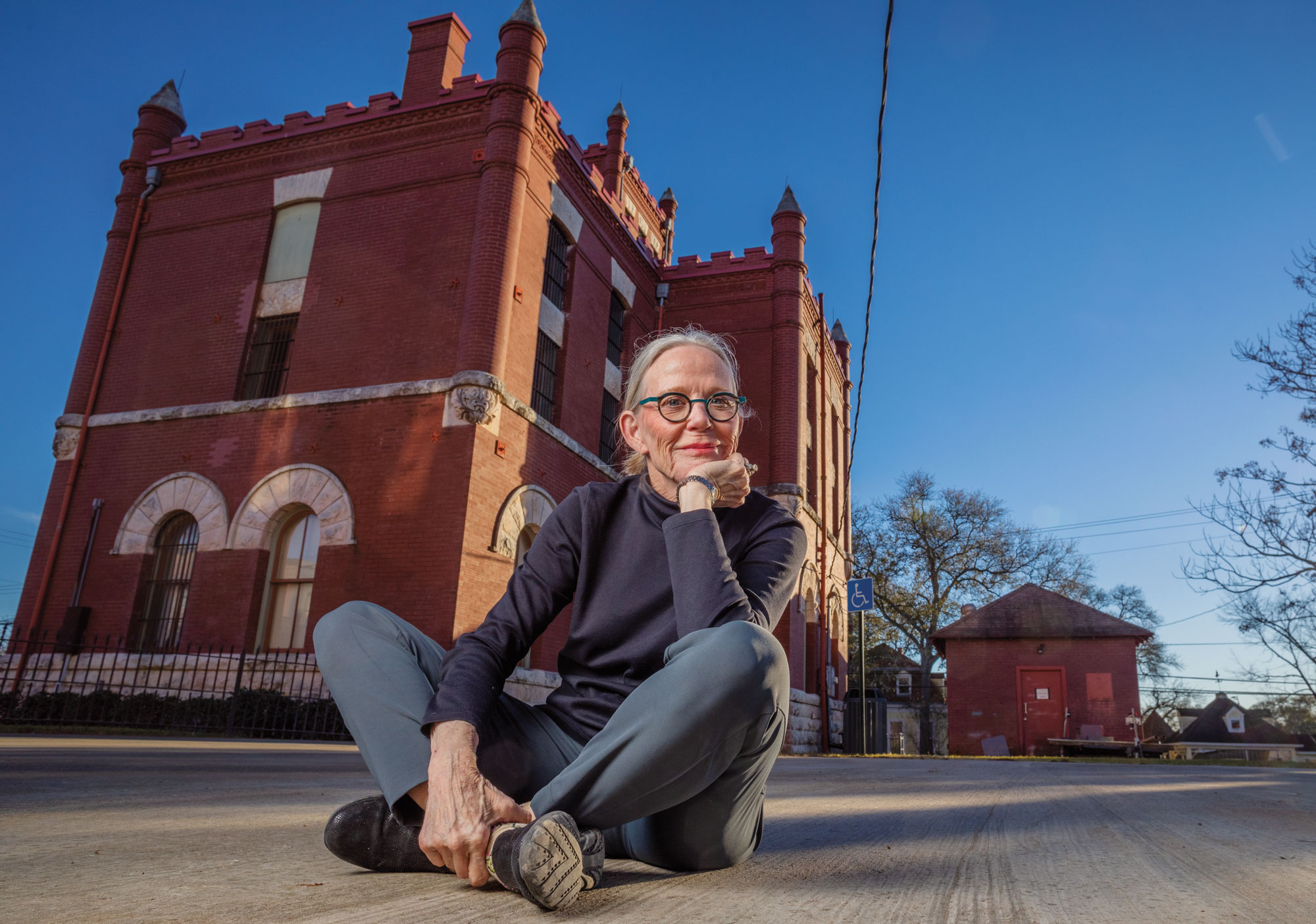 When Lindy Chambers drives along the backroads of her hometown of Bellville, she often pulls over to take photos of dilapidated trailer homes or to collect the detritus that many people would pass off as junk—later to be resurrected in her artwork. A self-taught oil painter and sculptor known for colorful depictions of country life, Chambers moved from Hockley to this historic seat of Austin County about 20 years ago. She and her twin sister, Lee Lee Brazeal, taught art classes in a downtown frame shop and studio for two years before closing the business so Chambers could focus on making her own artwork. Over the years, Chambers has seen subtle changes in her adopted hometown, such as the recent opening of a barre and yoga studio downtown. While Chambers welcomes the new energy, she says she isn’t worried Bellville will lose its small-town atmosphere any time soon.

Bellville is named for Thomas B. Bell, one of Stephen F. Austin’s “Old 300” colonists. Today, one of Bellville’s most interesting landmarks is Newman’s Castle, a replica medieval compound open for tours and built by local bakery owner Mike Newman.

“When people move out here, they get much nicer. They’re not fighting that traffic. You get out here, and you are the first to hear the geese fly, and that’s an awesome sound. And the tarantulas crossing the highways in springtime, it’s an awesome sight. And the stars, you can actually see the stars, they’re so bright.”

“My art was inspired from just being out in the country. All these trailers, that’s what’s out here—I think they are part of every small town. Originally, trailers were made in the ’40s for housing after the war. They were always zoned outside of town. The trailers have a stereotype. I wanted to get rid of that; they’re homes for people. I try to make them interesting and pretty, and I try to do that with bright colors.”

“I started painting trailers in 2013, and I was doing trash paintings before that, using water bottles and a mattress. I get some things at the dump, and friends will bring me some. When people leave stuff out in the road, free for anybody to pick up, I get that too. I just collect it, make something nice out of it, look at it in a different way. Artists are basically problem solvers, I think.”

“They have a really nice equestrian cross-country course out here at Pine Hill, and they put on some horse shows there [Chambers was formerly an equestrian rider and still owns horses]. It’s just a great place to show, with sandy loam soil. We like to go to the Kenney Store; their aim is to be one of the biggest music venues in the Southwest. It’s pretty awesome. When they have bands, the place is packed—they’re all good bands. And then we have the Austin County Jail Museum, which is gorgeous.”

“Bellville’s a quiet little town. For Halloween one year, we put up a big painting of a pumpkin. Some people in town thought it was witchcraft. That was about 20 years ago, and the town really has changed a lot—more city people moving here. We try to hang around the creative people. They like art and they like music, and they want Bellville to grow.”

“You see a lot of strays, and you can’t pass ’em by. You take care of them, or you find them a new home. We even had a donkey dumped off, a little yearling. We went up and down the road asking, ‘Have you lost your ass?’ We even put an ad in the paper. But we never did find the owners, and we kept him until he died.”