Can Sewage Water Save El Paso? 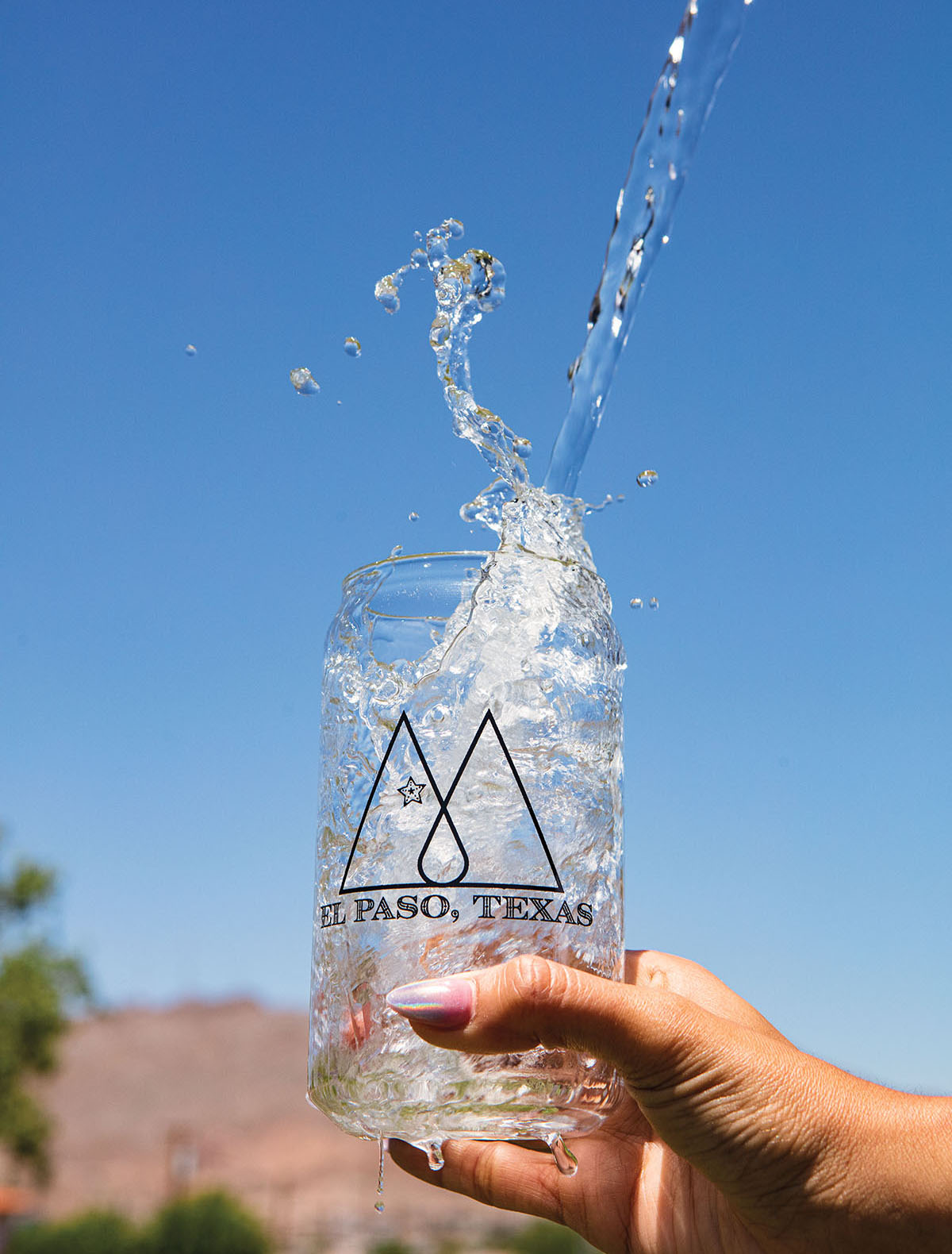 In southeast El Paso, where the city is quieter, the traffic not as heavy, and junkyards with broken yellow school buses are much more prevalent, the Roberto R. Bustamante Wastewater Treatment Plant is an unlikely beacon of hope. It’s about 1,000 feet from the Rio Grande and less than 2 miles from the Zaragoza Bridge, an international point of entry. Just as there’s a fence along the river, there’s a fence around the plant, with a sign proclaiming this is a construction zone. Canals with open gates dot the landscape. Not that those gates matter since, in mid-March, there’s no water here.

Instead, the irrigation drains look more like ditches where tall weeds grow only to catch plastic shopping bags on days when wind races off the Franklin Mountains. On days when the blue desert skies turn the color of sepia and the sun struggles to shine, this seems like the last place for solving El Paso’s persistent problem: water scarcity. But it’s easy to forget El Paso is also a place of aspirations.

“There is no other project in the state right now that’s proposing to do what we’re doing,” Gilbert Trejo says. As the chief engineer at El Paso Water, the city’s water utility company, he’s helping to design the Advanced Water Purification Facility to be built next to the Bustamante plant. By 2028, the former will take sewage water, treat it, then deliver it—10 million gallons a day—back into the city of El Paso’s taps.

This is the latest solution to the most essential, looming question that faces those living in and visiting El Paso and the West Texas desert. A report from the early 1990s showed that by 2020, without conservation efforts, the city would exhaust all its groundwater sources. It’s why at this scale, no one else in Texas has done what El Paso is doing, though they soon might.

A view of El Paso from the Chihuahuita Neighborhood Park. Photo By Christ Chavez.

“We do things a little different,” says Brooke Underwood, assistant general manager for Destination El Paso, which helps manage and promote the city’s tourism. “At one point, our slogan was, ‘Do Texas Different.’”

Underwood sees this effort as a great marketing opportunity to promote El Paso’s conservation efforts. It’s also an opportunity to publicize the ingenuity and determination of a city that without water might have wilted and crumbled before getting blown away by the desert wind.

“The responsible thing for us in the desert is to reuse water as much as possible,” Trejo says. “That’s what this project lets us do.” Born and raised in El Paso, Trejo’s always been around the city’s water. As a teenager, he worked for the irrigation district, cleaning the same canals he’d played in as a boy. The ditch riders, who controlled the flow of water, taught Trejo how it moved from the Rio Grande, directed by opening and closing gates along the canals, and how that system was centuries old. “A lot of those canals were built by Native Americans,” Trejo says.

Since it’s the same question most who live here have asked themselves, it’s easy to imagine Native Americans also struggling to answer the life-or-death riddle of finding water in the desert. It’s the same problem that, for at least the past few decades, El Paso officials have also tried to solve. It’s what led them into a legal dispute through the 1980s.

New Mexico officials said allowing El Paso to buy their public water violated their state constitution. It was like giving away state property. But because it was cheaper to challenge New Mexico’s laws in court than to get water from anywhere else, El Paso sued. And because of the animosity between the neighbors, it became one of the country’s bitterest water conflicts.

Before long, New Mexico’s then Lt. Gov. Mike Runnels urged his constituents to refrain from spending their dollars in El Paso. At least one millionaire from New Mexico, Bill Stahmann, closed his corporate account with El Paso’s State National Bank and resigned as its director. Stahmann told El Paso if their city didn’t have enough water, they should limit their growth. Even the Las Cruces Women’s Council of Realtors got involved. They distributed bumper stickers around southern New Mexico that read, “Thou shall not covet thy neighbor’s water.” The 11-year dispute ended with a “settlement agreement,” and El Paso didn’t get any water. 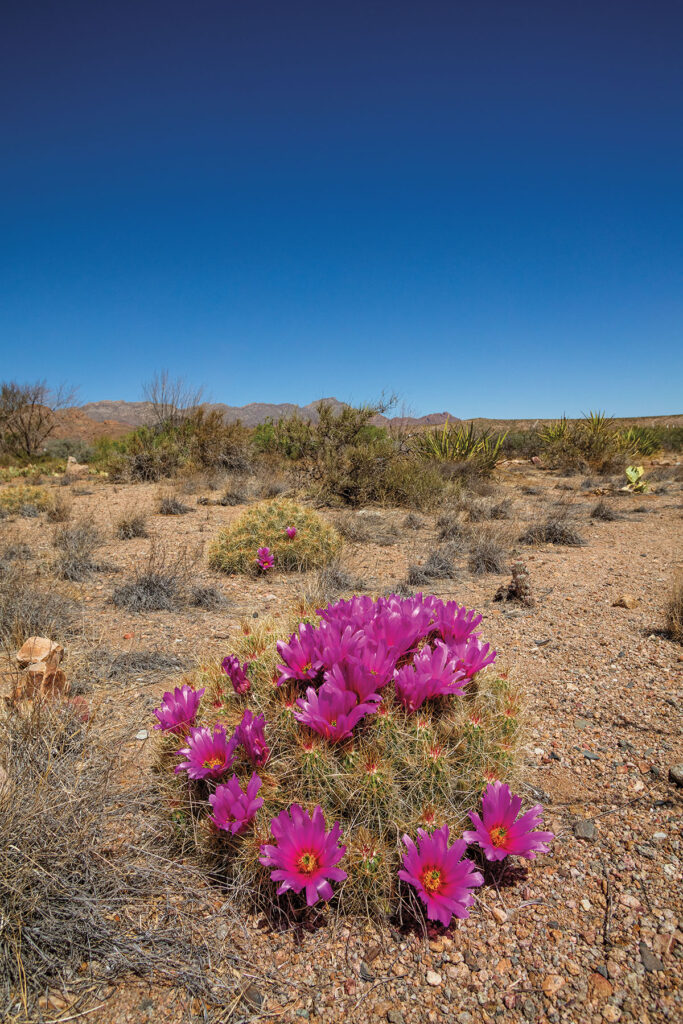 In arid El Paso, there is an ongoing effort to solve the issue of water scarcity. Photo by Christ Chavez.

The ordeal reminded El Paso that every drop matters. Billboards throughout the city told residents to conserve water. In the ’90s and ’00s, El Pasoans who changed to water-efficient appliances got cash and rebates. Another program paid homeowners to replace their grass with cement, landscape rocks, or desert plants and trees that require little water, like Arizona ash. Those who kept their grass could only water it on certain days.

“El Paso and surrounding cities have successfully met the sustainability goals of conservation efforts,” says Marisol Dominguez, a Ph.D. student at the University of Texas at El Paso. She’s earned national grants and awards for her research on water, a topic she chose because she grew up in a family of farmers in an arid region of the border.

By 1991, El Paso made wasting water a misdemeanor punishable by a fine of up to $500. And because water conservation could only work if future generations also participated, El Paso Water introduced Willie the Waterdrop that same year. He makes appearances at elementary schools, libraries, and community events, where he teaches kids how they can save water.

Toni Mizdal, a graphic designer, grew up abiding by the rules of the blue mascot with a red headband bearing “Willie” in yellow letters. She has lived in El Paso for most of her life, in a house with a front yard that once “had amazing grass” but is now just “rocks and dirt.” As a student, she went on field trips to water plants and learned about recycling water. As a mother, her daughter’s field trips included tours of the Kay Bailey Hutchison Desalination Plant, the aqua-colored building in El Paso’s east side surrounded by desert to its north.

While the Bustamante plant treats wastewater then returns it clean to canals, the Kay Bailey Hutchinson plant—in simple terms—takes salty, undrinkable groundwater buried deep beneath the desert and makes it safe to consume. It’s the world’s largest inland desalination plant. Since 2007, this is another way the city gets clean water. 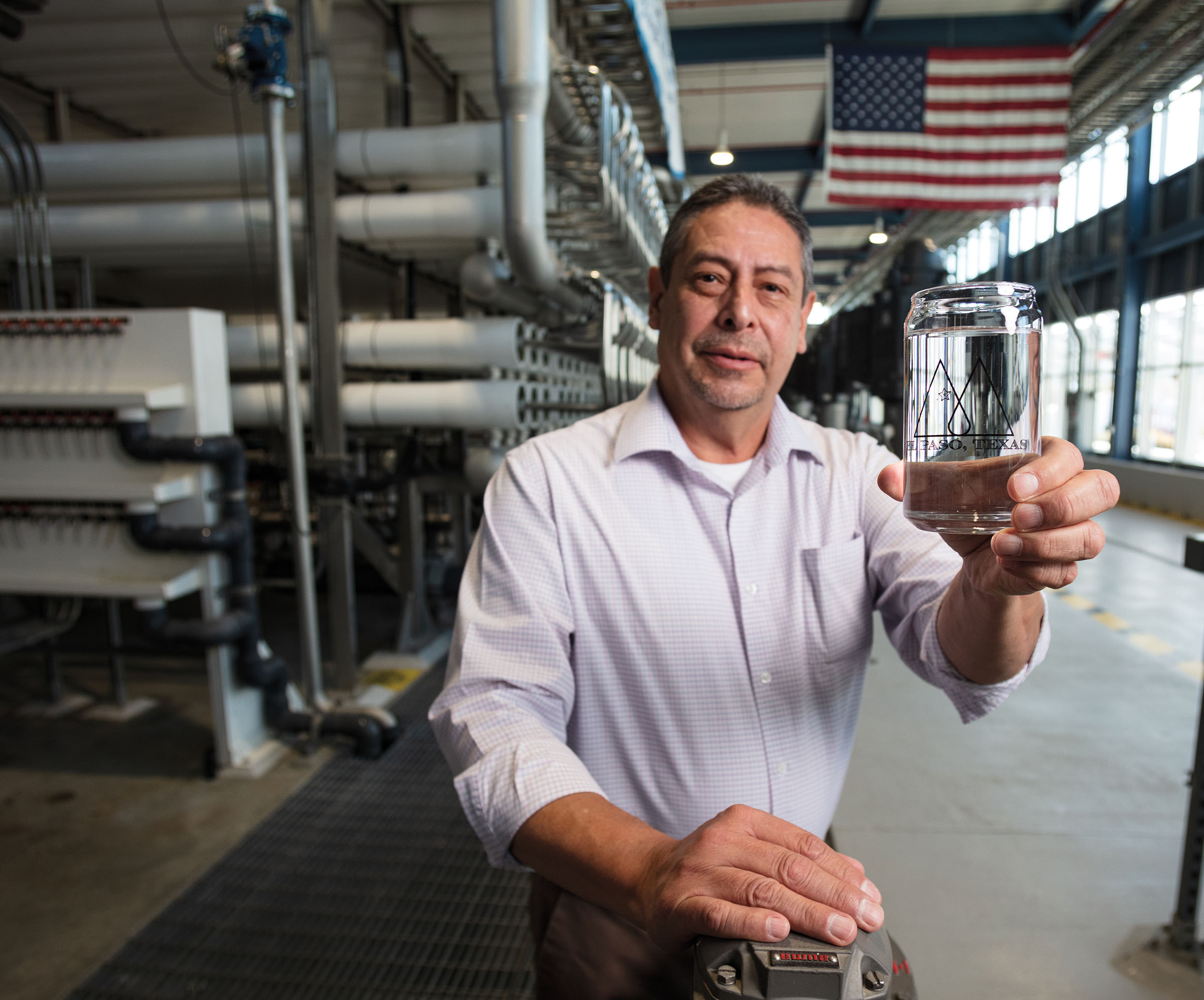 Mizdal, who drinks tap water, knew about the desalination plant. She didn’t, however, know about the water plant that will take sewage water, treat it, then about 7 hours later supply El Paso’s tap at a purified standard. “I don’t know how I feel about that,” she says. “Part of me thinks it’s really cool because you never think of El Paso as progressive, but it’s kind of gross at the same time.” Still, she says so long as the flavor doesn’t change, she’ll continue drinking from the tap. Per surveys administered by El Paso Water, 85% of El Pasoans will do the same.

“We’re not getting much negative feedback from our customers saying, ‘Hey, you’re making us drink our sewer water. Why are you guys doing this?’” Trejo says of pilot testing. “We’ve had a lot of support from the community, and we think it’s due to decades of education.”

El Pasoans have decreased their water usage by 30% per person since the ’80s. And now, El Paso, New Mexico, and Mexico often work together to bolster their water sources. Because of these efforts, four water parks are scheduled to open soon in El Paso.

But this is still the desert, and some have used the landscape to their advantage to boost tourism. “The desert gave us Hueco Tanks,” says Mary Bocchicchio, a guide at Sessions Climbing and Guiding, which hosts recreational activities at Hueco Tanks State Park. “Our business is solely based on the state park being here.”

Even if 2020 came and El Paso escaped the most dire predictions of water depletion, the resource will never be plentiful here. “We can’t predict the future accurately,” Dominguez says, “but there are studies that all point toward a drier state along the Rio Grande.”

What happens when months pass between rain and canals go dry? When the reservoir two hours north of El Paso that was once almost at capacity falls below 5%, as it did last October? When the El Paso part of the Rio Grande has just six weeks’ worth of flowing water, even if it once ran for eight months of the year.

The existential questions of life in the West Texas desert are impossible to ignore. These latest solutions underscore the ongoing tension between the will of the land and the people intent on inhabiting it.