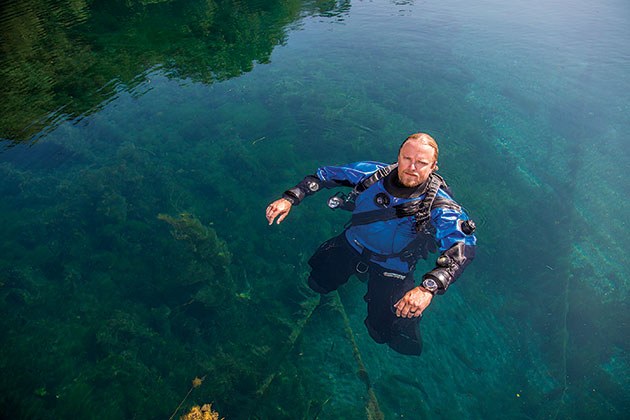 Frederick “Fritz” Hanselmann holds many titles with the Meadows Center for Water and the Environment at Texas State University in San Marcos, among them Chief Underwater Archaeologist and Diving Program Director. But his real passion is finding out what lies under Spring Lake, which is a state archeological landmark, critical habitat for endangered species, and the literal and physical heart of the Center.

The archeology of the springs yields evidence of every period of Texas prehistory, making it among the longest continuously inhabited sites in North America. Hanselmann’s research aims to learn more about the people who lived here, including how they made use of the water and patterns of subsistence.

In addition to this and other international projects, Hanselmann is also one of the principal investigators of the Monterrey Shipwreck Project in the Gulf of Mexico. This effort to document the wrecks of three mysterious ships—which rest more than 4,000 feet below the surface of the Gulf—represents the deepest archeological excavation ever conducted in North America.

“It’s a phenomenal project,” he says. “The ships are within a few miles of each other and have a lot of similar artifacts, so we’re potentially looking at a convoy that went down in the same storm, possibly a privateer and its two prizes.” The tragedy likely occurred early in the 1800s, a time of major upheaval in Europe and the New World.

Archeological sites, whether far below the ocean or mere feet beneath a glass-bottom boat, offer a number of benefits to society, says Hanselmann. “They play a role in education, community cohesion, identity, economic development, and even tourism. Archeology makes history tangible and gives us a physical connection with the past.”