From MTV to politics, the San Antonio-area follows his interests in pursuit of cultural insight 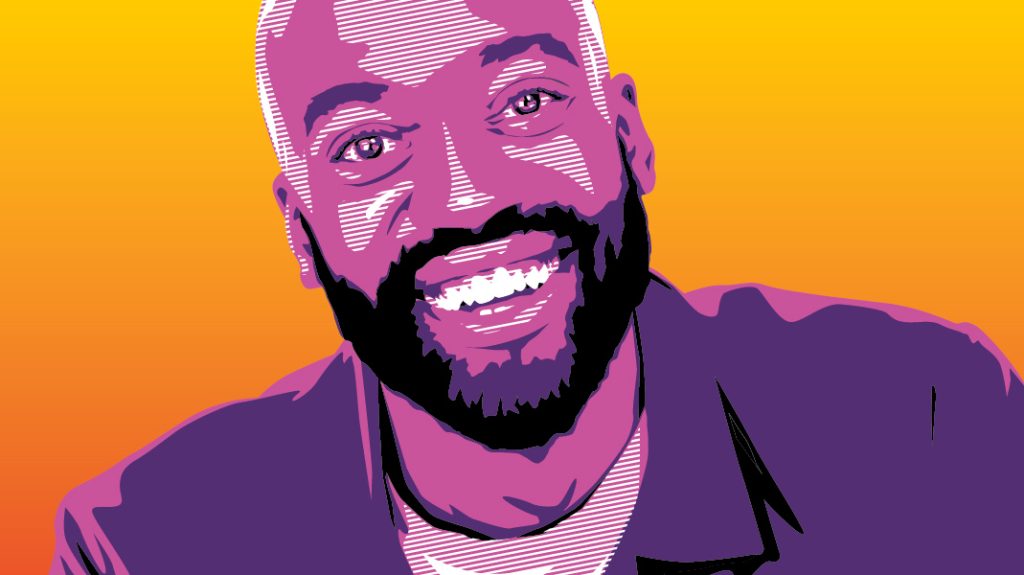 Sam Sanders’ popularity as a radio and podcast journalist is driven by his insightful takes on news and culture delivered in an engaging, eminently listenable style. Though his on-air career—first as an NPR reporter and producer, and then as a host of the NPR talk show It’s Been a Minute with Sam Sanders—came with barely a hint of Texas twang, Sanders attributes his style in part to his childhood in Texas. “Growing up a Texan, you learn how to have a certain kind of kindness and charm and warmth with new people that translates into a very clear interview skill,” he says. “So much of the work in these interviews is getting folks comfortable with you enough to really open up.”

Born in New Braunfels, Sanders lived in Seguin, Converse, and Schertz before attending San Antonio’s University of the Incarnate Word, where he studied music and political science. He still returns to San Antonio, where much of his family lives, for weeks or months at a time to ground himself away from the harried media landscape of Los Angeles.

On It’s Been a Minute, Sanders spent five years exploring a wide range of political and cultural topics with his own blend of humor and serious commentary. But earlier this year, Sanders left NPR for a slate of even more pop-focused pursuits. He’s the developer and host of Into It, a weekly podcast that debuted in July and is produced by Vulture—a branch of New York magazine—in which he dives deep into various aspects of the cultural zeitgeist. Sanders is also the co-host of the podcast Vibe Check—with poet Saeed Jones and journalist Zach Stafford—on the Stitcher platform. They tout the show as “your favorite group chat come to life.”

TH: What surprises people most about your childhood in Texas?
SS: I’m literally the son of a Texas rancher who spent time on the family farm as a kid. My dad was a rancher by trade, and there’s a family farm that we sold after he died. There were, like, 200 acres outside of Cuero, and it had about 300 head of cattle. We would go to the farm on the weekends, and my dad would tend to the cattle—I would just watch. A lot of times that part of my past doesn’t come through fully in my work, in part because I don’t want to fake that legacy. When my dad would ask, “Do you want to come help with this?” I was like, “No, it’s hot.” I wanted to stay inside and watch MTV.

TH: You started off your career doing hard news reporting at NPR, covering breaking news and politics. What drove your pivot into culture reporting and analysis?
SS: When the Elián Gonzalez story broke, I was 17 or 18, and it just made me obsessed with the news in general. After that, I became a news junkie and then a politics junkie. But before that, I was an MTV and VH1 baby and was obsessed with popular culture. What’s actually been happening my entire life, now that I think about it, has been this toggling back and forth between the hard news and a real pop-culture obsession.

Toward the end of covering the 2016 election, when I was conceptualizing what became It’s Been a Minute, I realized my coverage would be better if I found ways to talk about both at the same time, to connect the dots. So, for the last five or six years, I’ve worked to meld and merge those worlds, and to find ways to talk about current events in a way that felt more holistic. And I think we got there.

TH: How does your new Vulture show, Into It, fit into that philosophy?
SS: I am obsessed with convincing people that popular culture and entertainment are so much more important than they think. The stories we tell ourselves for fun are actually the scripts we use to figure out how to be. Having that dialogue is edifying for all of us, and also so informative. I learned in large part how to be Black, how to be gay, how to be an American, through what I was consuming in music, in books, in TV and movies. We think we don’t have to take it seriously. We do it for fun, after hours, once we’re done working. But what you consume for fun is literally, without you even knowing it, teaching you how to be. Let’s talk about that.

TH: Do you make it back to San Antonio often?
SS: My ultimate goal is a part-time existence—some time in Texas, some time in Los Angeles. But honestly, to make that work, you need to own at least one of those residences. I was in Texas for about six months during the pandemic, though, and I almost pulled the trigger. One of my best friends from college is a realtor there, and we were looking at places.

Of all the big cities in Texas, San Antonio is the least pretentious. Austin is basically hot LA at this point; Dallas has all that bougie, spoiled oil money; Houston is too big to function. And San Antonio is just, like, good vibes: “Come chill. It’s cheap here.”

TH: What are your favorite San Antonio spots to visit when you come back?
SS: When I was a kid, San Antonio seemed comfortable, homey, quiet. It wasn’t a place that I thought of as cool or swanky. But after I left, some elements of swank showed up. My favorite is probably the lobby bar of Hotel Emma, in the Pearl district. Whenever I have friends in town, we drink there. They’re impressed, and so am I, every time.

There’s a taco spot called El Sabrosito Mexican Restaurant across the street from my first high school, Judson High School in Converse. I always remember their tres leches cake being one of the best things that I’ve ever tasted in my life, and just going there and getting a dozen breakfast tacos for less than $20 and loving it. I usually make it a point to go there at least once.

TH: How has your Texas experience shaped your approach to journalism?
SS: In general, Texas always makes you second guess your idea of what a state is, or what a country is, because there’s so much diversity in every regard within Texas. I think being in Texas during the pandemic, and still getting out there a lot now, grounds me and reminds me that there is a life outside of the coasts.

TH: What’s your favorite drive in Texas?
SS: Interstate 10. I know it gets a bad rap. But in my life, it has been a route of pilgrimage. After the 2016 election, I had covered that election, and I was just so tired, so empty, so spent. I had a week or two off before I had to get back to work, and I was like, “I’m just gonna go to Texas and figure stuff out.” I hit up one of my best friends from college, Ashley, and we got in the car and headed to Marfa. On the 10, I began to feel the weight of that election and the weight of that work just drop off.

Ever since then, driving the 10 for long stretches has felt strangely restorative. I began to take that route to come home for Thanksgiving with my family. At this point in my life, I think I’ve done that drive at least 12 times. I get this time on the road to just think and stop and shake everything off.

Now I know all of the parts of the terrain. I know what detours to take for the best beef jerky. People think it’s so boring—they especially think the last leg of my journey, from El Paso to San Antonio, is so boring. No, it’s not. It’s so beautiful! Because in the span of eight hours, you see the land change right before you. And just watching that as you drive through it, it never gets old.

Follow Sam Sanders and his work on Twitter, @samsanders.
Find his podcasts, Into It and Vibe Check, on various podcast platforms.