The poetry of Carmen Tafolla 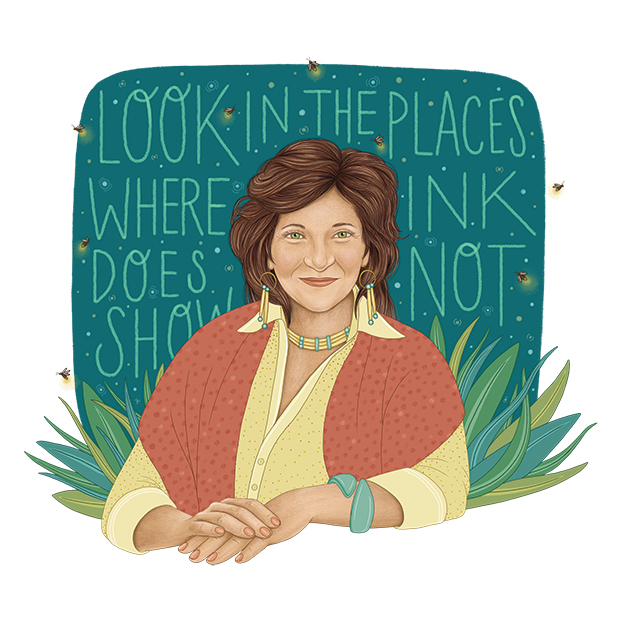 Nearly every year since 1932, the Texas Legislature has named a State Poet Laureate to honor significant contributions in the field of poetry. In 2015 that distinction went to San Antonio native Carmen Tafolla, a celebrated Chicana literary figure. Just three years prior, Tafolla was named the very first poet laureate of San Antonio, where her family has resided since the 1700s. Tafolla published her first poetry book, Get Your Tortillas Together, in 1976 and cemented her reputation with collections such as Curandera (1983), Sonnets to Human Beings (1992), Rebozos (2012), and This River Here: Poems of San Antonio (2014).

Not one to shy away from other genres, Tafolla has also written books of short fiction, cultural histories, and tales for young adults and children. The thread that ties her writings together is the Tex-Mex culture that she experienced while growing up on the West Side of San Antonio in the 1950s and ’60s. The people, places, traditions, cuisine, and language of the barrio permeate her stories, giving them a distinctive flavor. Tafolla has penned odes to her hometown—its missions, river, and history—as well as poems depicting the daily lives of Mexican-Americans. Her nonfiction works range from such topics as the sociopolitical struggles of her ancestors to the vibrant history of tamale-making parties known as tamaladas.

Tafolla is recognized particularly for her strong female characters, several of whom she has portrayed as part of her traveling one-woman show My Heart Speaks a Different Language. With more than 20 books to her name, Tafolla is also a professor of transformative children’s literature at the University of Texas at San Antonio. Her stories help keep the spirit and heritage of her ancestral city alive.

Q: Why did you start writing?

A: I was born into a family that gathered in the backyard on Saturday nights, with tamales and Big Red, watching the fireflies and telling stories of Texas snakes or ancestors’ struggles. I grew up in a poverty-stricken barrio, where there were few children’s books available, and nothing in our schools or our libraries that reflected our heritage or our personal experience. When I started to write, it was in order to document the beauty of the culture that surrounded me.

Q: Why do you write in so many different genres?

A: Growing up speaking English, Spanish, and Tex-Mex, I became spoiled by that ability to use different vehicles to express what I needed, and sometimes literary genres can help us too, to express something better in one way than another. Currently, I have a children’s chapter book called The Prince of Chocolate almost ready, and I have been at work on the biography of Texas labor leader and civil-rights organizer Emma Tenayuca with my co-author and Emma’s niece, Sharyll Teneyuca.

Q: How did growing up in San Antonio influence your literary style?

A: The West Side of San Antonio is where I heard my earliest stories. It is also where, as a young college grad, I got a summer job collecting folklore from elderly people. There, I developed and polished the nuances and rhythms of spoken literature that later became a characteristic part of my style of prose, poetry, and dramatic performances. The central themes, characters, values, and idiomatic expressions are based on San Antonio and South Texas.

Q: What hometown sites do you like to show visitors?

A: I love the missions—it’s hard not to feel at home when you stand inside those centuries-old walls. I love Brackenridge Park too, especially the Brackenridge Eagle train. The cultural arts centers here have some topnotch talent, and walking through the mercado at Historic Market Square downtown is a “have-to.” Riding the barges down the river gives a whole different perspective.

Q: What are some of your other favorite places in Texas?

A: Last year, I built an initiative to take poetry workshops to 22 of the poorest school districts in the state. It took me to some amazing places. I found the physical beauty of Terlingua dramatic and enchanting. I worked with students in Ysleta, where the Tigua Indians have maintained their cultural identity and traditions, and in Rio Grande City, Alice, inner-city Fort Worth, rural Hutto, El Paso, in whose rich border culture I have always delighted, and so many other magical places.

Q: Food has been an important ingredient in some of your writing. What are your favorite restaurants?

A: In San Antonio, I love Peter El Norteño for its tortillas, and Panchito’s for its shredded chicken taco with avocado slices. I like the enchiladas suizas at Rosario’s, and the bánh xèo at Snow’s Viet-Nam Restaurant. La Focaccia Italian Grill is amazing, and Capparelli’s on Main is hard to beat for eggplant parmigiana. When I travel to the Valley, I always try to get a bean-and-cheese pato from El Pato.

Q: Can you recommend any good bookstores or literary venues?

A: Anyone in San Antonio should try to catch a reading at the Jazz Poets Society or the Sun Poets Society. Gemini Ink and the Esperanza Peace and Justice Center regularly host readings, as does our favorite independent bookstore, The Twig.

Q: Why is poetry still relevant in today’s society?

A: The Aztecs said that poetry was “the ultimate truth,” and I think they were on to something. I believe that the role of the poet is to be the “prophet” of society—someone who sees clearly what is happening and paints it in words, so that we can see and understand our lives. The amazing author Gabriel García Márquez said that every writer is a revolutionary, and he truly understood that writers want to change the world. I hope that my writing will reach Texans of all ages and help them love the cultures and characteristics of this state, in all our beautiful diversity and humanity.