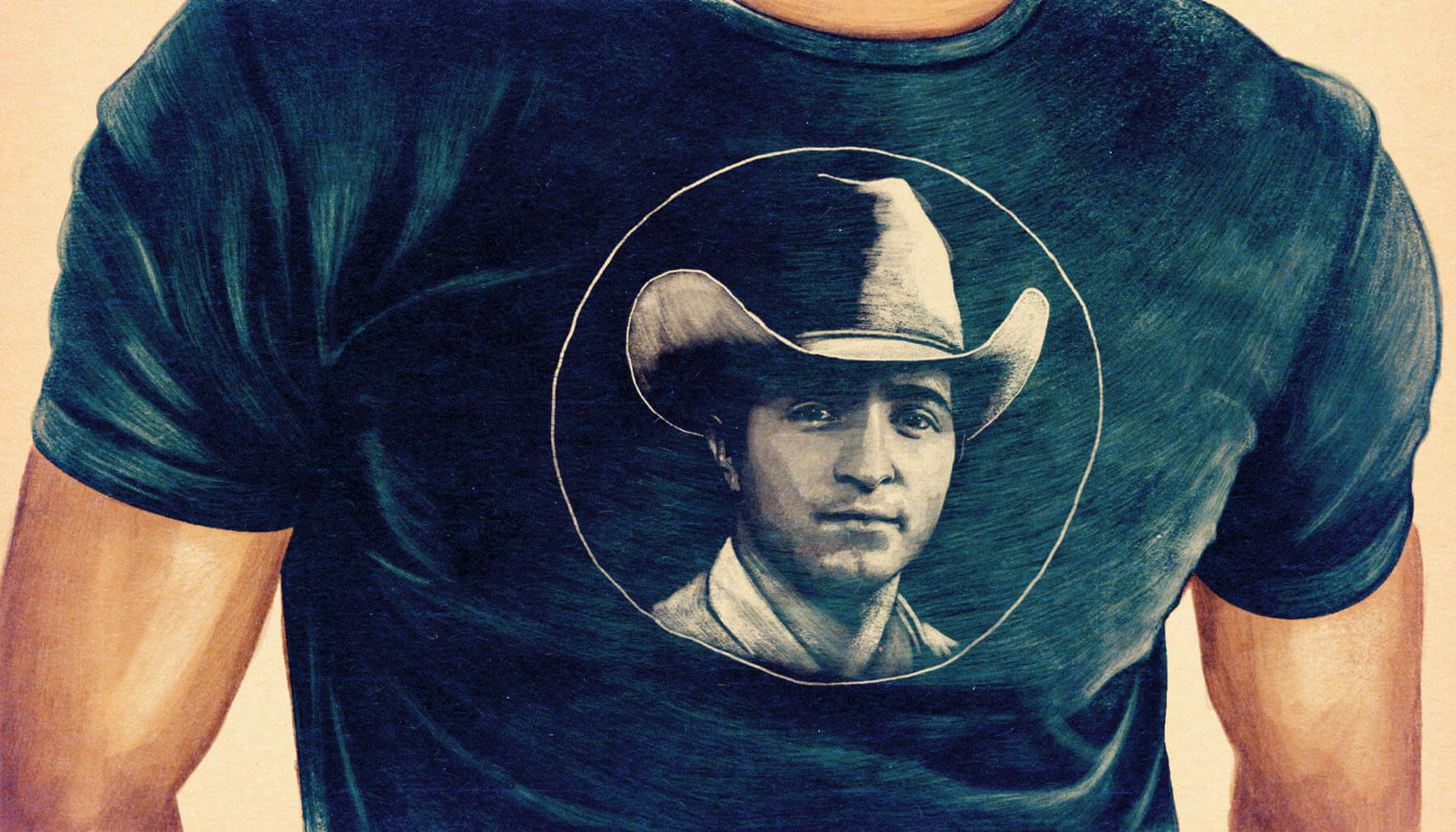 As a photographer, pilot, author, and entrepreneur, Jay B. Sauceda has ruminated upon the Texas identity from many angles. In 2013, the La Porte native and his wife, Priscilla Sauceda, launched Texas Humor, a company that makes T-shirts and hats he calls “clothing for the Texan state of mind.” In 2016, Sauceda dished out more Lone Star insight in Y’all: The Definitive Guide to Being a Texan, a field manual for aspiring Texans that sells big every holiday season.

Sauceda has also taken his Lone Star fascination to the sky, piloting his single-engine Cessna around the state’s entire 3,822-mile perimeter and taking photographs along the way. The images resulting from the six-day voyage—published in a 2016 book titled A Mile Above Texas—capture the vermilion ribbon of the Red River, the snaky Sabine cutting a border with Louisiana, the rugged flow of the Rio Grande, and the invisible state lines of the Panhandle.

Since its founding, Texas Humor has expanded from an apparel line based in the Saucedas’ Austin garage into a shipping and fulfillment company with more than 120 employees. Sauceda sold the fulfillment business last year but retained the Texas Humor line and its social media fan base of nearly 2 million. While he and Priscilla raise their two young children, Sauceda works in corporate communications and plans to expand Texas Humor’s offerings to include gear for camping and the outdoors. “Texas pride is an oil well that’ll never run dry,” he says.

TH: You’re a fifth-generation Texan. Does that change anything about the way you feel about living here?
JBS: The idea that Texas is a mentality and approach to life, in my mind, has always been way more important than how many generations back someone goes. Sure, it’s fun to have that connective tissue to something that is historically very important to me. But I think what’s more important is, while I’m here, what is my mark? I can’t lay claim to the accomplishments of the people who came before me. I love the association with them, but I hope the things I do while I’m here are impactful enough that the people who come after me think, “I’m related to somebody who was here, and they made a mark on the state.”

TH: Your first T-shirt design for Texas Humor was a map of the U.S. with the words “Ain’t Texas” on the rest of the country. Can you tell me more about that design?
JBS: Texas Humor, and that design in particular, was never meant to be political at all. It’s more about the fact that when you travel with a Texan outside of the state, they spend a lot of time either complaining or comparing things to Texas, like “Well, when we’re at H-E-B back home … ” or whatever. So that’s where the idea came from. And it just turned out that it was a unifying flag for people to self-emphasize the things they love about the state.

TH: How does it feel to linger in the sky over the state lines rather than just zoom past them?
JBS: About 200 years ago, with the Treaty of Guadalupe Hidalgo, a group of people got together and decided the Rio Grande/Rio Bravo would be the border between Texas and Mexico. And henceforth, there is this visual identity that we have for Texas. So, the Rio Grande/Rio Bravo shape is now this thing people have tattooed on their bodies. You can go anywhere around the world, and people you meet can probably draw the shape of Texas more easily than they could the United States. It’s amazing to me that it is so distinctive in that way. Yet, I remember when I flew out of Dalhart and made a point to fly up to the northwest most point in the state—well, there’s nothing there. That super sharp, very defined border is irrelevant in the place that it exists.

TH: How did you take photos while flying a plane by yourself?
JBS: The short of it is, in an ideal world, you configure the plane in a way that it can fly itself once it’s flying. Equilibrium is the name of the game, right? So, there were a couple of cameras on the wings and then I had two cameras on my lap. And if I saw something really cool, I’d put it on autopilot and shoot out the window quickly and then grab the yoke back. The high-wing Cessna that I flew is designed to be like a Cadillac in the sky. It was pretty steady.

TH: It’s remarkable that three of Texas’ borders are defined by rivers. Do you think that plays a role in Texans’ identity?
JBS: I mean, the cocky Texan in me would say it’s because we just have a more lush history than everybody else, and maybe the lushness comes from the fact that we have so many damn rivers and so much of Texas lifestyle is defined by the rivers. From the air, I would say the Rio Grande border is more distinct than the Sabine, mostly because the Sabine is hidden by tall pines. The pine curtain is so dense that the water features aren’t as obvious as they are for the Red River or the Canadian in the Panhandle. You see the whole river on the Red River—it is a vein in shape and color.

TH: How did this project change your feelings about the border?
JBS: It started out as an idea that was purely visual in nature. And it ended in sort of an appreciation for the geology, the history, and the people. I met so many people. I had a long conversation with the woman who ran the airport in Marshall. I met a guy who flew this 40-year-old plane super low over the oil pipelines of East Texas, looking for leaks every day. And I just kind of stumbled upon him because I was having coffee in the airport before I took off. I ran into the lawyer Dick DeGuerin one Sunday morning in Marfa and helped him gas up his plane because I didn’t want him to get his khakis all dirty. My intent was to do an art project, and it ended in a ton of vignettes about the history of Texas and teaching people about aviation and so much more than I ever thought it was going to be.

TH: What could Texans learn from circumnavigating our state in the air?
JBS: My hope is that it would create a little bit of self-awareness that if you live here, there’s a pretty good reason you do. And that reason is probably not far away from the reasons of every other person here. And there is far more in common between the people at opposite ends of the political spectrum than there are things that divide us. And from that big point of view, the things that truly divide us are about as silly to argue over as whether you like sweet or spicy barbecue sauce, right? For me, every time I’ve been lucky to go out and work on a project, I’m just like, “Man, I got a lot in common with this person.” So, between being on the ground and being 10,000 feet up in the air, I have yet to find a reason why two Texans should hate each other. There are plenty of reasons to disagree with people, but there are very few reasons to hate.

TH: What is one of the most important nuggets of wisdom you shared with aspiring Texans in Y’all: The Definitive Guide to Being a Texan?
JBS: If there is a nugget that I want aspiring Texans to take away, it’d be that Texas is a lot of things to a lot of different people, and the best way to fit in if you’re new here is to remember that you got two ears and one mouth. So, listen more than you speak because there are a lot of really great stories. So let them talk; ask them questions. You’ll likely find you have more in common than you thought.