Theater-hopping in the Houston Theater District 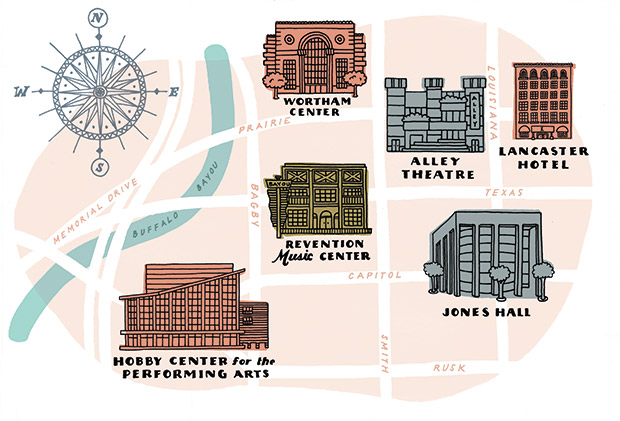 Houston’s history as a theater town dates to the early years after the Texas Revolution. By 1838, even before the first church had been built, the city already had two competing theater companies. As Houston grew, so did its entertainment offerings. Today, Houston boasts the second-highest number of theater seats (about 13,000) in a concentrated geographic area in the United States—trailing only New York City.

Discover Houston Tours offers an “All the World’s a Stage” tour of the Theater District via Metro-Rail by appointment. Call 713/222-9255.

The Houston Theater District covers 17 blocks in downtown Houston. Here is information on lodging and shows on the bill in the coming months.

In the midst of this city known for its sprawl, the Houston Theater District, spanning 17 blocks in the heart of downtown, offers five major venues within walking distance of one another: The Alley Theatre, the Hobby Center for the Performing Arts, the Jesse H. Jones Hall for the Performing Arts, the Wortham Theater Center, and Revention Music Center. Here, within a small radius, visitors can experience productions by professional resident companies in all of the various performing arts disciplines—dance, opera, music, and theater.

Having spent the better part of my life in Houston, I tend to take this cultural abundance for granted. So one weekend I dragged my beau out to the Theater District to make up for lost time. We checked into the city’s oldest continuously operating hotel, conveniently located in the midst of the district—the historic Lancaster Hotel. Built in 1926 and family-owned ever since, this 12-story establishment was originally called the Auditorium Hotel, as it was constructed directly across Texas Avenue from the City Auditorium. That venue had opened with great fanfare in 1910, touted as “the largest fireproof auditorium in the South.” In its early days, it hosted the budding Houston Symphony and eventually attracted stars like Anna Pavlova and Elvis Presley.

Many of these headliners stayed at the Lancaster while in Houston, and in the 1940s, some, including the singing cowboy Gene Autry and his horse Champion, made appearances in its bygone basement nightclub, the Stage Canteen. Recently renovated with décor that combines classic and updated design, the Lancaster pays homage to its past with art on its walls showing panoramic views of the city’s skyline from former days, and many of the rooms feature framed posters promoting past shows at the nearby venues. Our suite included recent posters from the Alley Theatre and Society for the Performing Arts, not to mention a plush sofa in the sitting area and a bed with a cloudlike mattress so sumptuous that some guests purchase one just like it directly from the hotel. From our windows, we could see all five of the venues that the Theater District has to offer.

Although the hotel still stands, the building for which it was originally named shuttered in 1963, to be replaced in 1966 by Jones Hall. Today, Jones Hall is home to the Houston Society for the Performing Arts, which presents artists of international renown in all disciplines, and also the Houston Symphony—our destination for the evening. 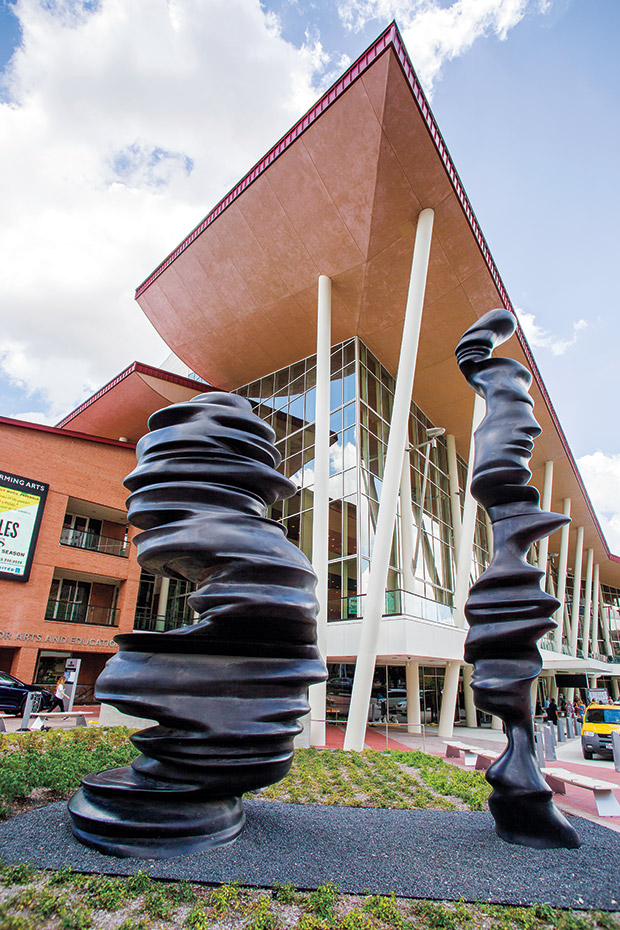 British sculptor Tony Cragg’s cast-bronze "In Minds" at Hobby Center for the Performing Arts. (Photo by Will van Overbeek)

After grabbing a bite in the hotel’s on-site Bistro Lancaster (I enjoyed a kale salad loaded with tender chicken, offset by a rich bread pudding), we crossed the street to Jones Hall and gazed up at its facade of white Italian marble, fronted by massive eight-story-tall columns. Inside, we wandered about the tiered lobby terraces before taking our seats under the hall’s soaring ceiling. Here, we sat enraptured as the sounds of strings enveloped us.

Afterward, we wandered a couple of blocks west to see the Hobby Center lit up at night and swarming with theatergoers. As the front of the building features plate-glass windows from floor to ceiling, we could see people inside congregating in the illuminated lobby and enjoying a nightcap in the swanky upstairs restaurant, Artista.

Although the Hobby Center was built in 2002, the site on which it sits has a long history as an entertainment destination. Here, in 1928, Sam Hous-ton Hall, a wooden structure with a staggering seating capacity of 20,000, was constructed in just 64 working days to host the Democratic National Convention. The arena then hosted the rodeo and other attractions before it was replaced in 1937 with two sturdier structures, the Sam Houston Coliseum and the adjacent Houston Music Hall. Until their demise in 1998, the Coliseum and Music Hall brought countless high-
caliber entertainers to Houston, including the Beatles and Jimi Hendrix.

Today, the Hobby Center continues the tradition of bringing great artists to Houston while also highlighting local talent, with two theaters tailored to different purposes. The larger of the two, Sarofim Hall, is designed for touring Broadway productions and musical-theater performances by Theatre Under the Stars, a local production company. Zilkha Hall, by contrast, provides a home for small and midsized performing-arts groups, including the Uniquely Houston series and its lineup of local nonprofit groups like Musiqa (a contemporary music ensemble), NobleMotion (a contemporary dance company), and Ars Lyrica (performing 17th- and 18th-century music on period instruments).

Alas, we did not have time to see it all. However, our hometown getaway did coincide with a Houston Ballet matinee performance at the Wortham Theater Center the following day. This colossal brick building, built along the banks of Buffalo Bayou in 1987, spans two city blocks straddling Prairie Avenue. Visitors enter through its 90-foot-tall arched entryway filled with glass panes to ride a long escalator up to the expansive grand foyer, which leads to two theaters. The center’s Cullen Theater is geared toward smaller dance and music productions, such as chamber music and jazz by Da Camera and Baroque music from Mercury (both resident music companies); the Brown Theater is more spacious, in order to accommodate larger-scale performances by the Houston Grand Opera and Houston Ballet. From the orchestra seats, I could see the dancers’ subtlest gestures and facial expressions. Behind me, three banks of red, scalloped balconies were packed with fellow patrons.

In the evening, we ventured next door to the Alley Theatre, which houses one of the oldest resident theaters in the United States. The troupe got its start in 1947, but its current building, made of cast concrete, was not constructed until 1968. Its austere Brutalist architecture resembles a simplified castle or elevated bunker, but inside, a sleek lobby opens up onto a broad, red-carpeted stairwell, curving upward beneath a triangular skylight. The building, which underwent a $46.5-million renovation in 2014-15, contains two stages: the larger Hubbard Theatre and the more intimate Neuhaus Theatre.

By the end of the weekend, we still hadn’t seen everything that we wanted to see. Across from the Wortham Theater Center, the Revention Music Center, which opened in 1997 in the Bayou Place dining and entertainment complex, beckoned to us with posters advertising upcoming big-name musical touring acts.

In the last hundred years, as Houston has grown and evolved, the city’s performing arts have burgeoned, and its venues have multiplied. Today, the sheer number of shows offered in the Theater District may be overwhelming, but their proximity is convenient. With so many destinations close at hand, the district makes it easy to enjoy a small taste of the Big Apple close to home. And the fact that it’s impossible to see it all in one weekend just gives us another reason to return.