Written by Art Williams, Photographs by Todd Grubbs and Cynthia Hestand | From the May 2017 issue | Updated: April 17, 2017 | Filed Under: Culture 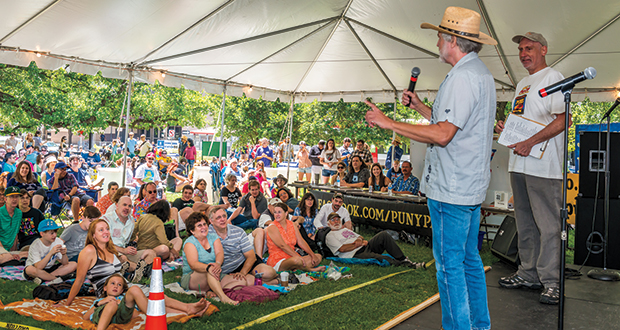 Lend us an ear and we’ll give you more corn!” That’s how the emcee greeted the jovial crowd at the very first O. Henry Pun-Off World Championships. And now, 40 years later, the annual Pun-Off is still going strong. Shucks, how could you not be a-maized by that?

The Susanna Dickinson Museum, at Brush Square, is celebrating the 40th anniversary of the Pun-Off with an exhibit of Pun-Off history, photographs, and an interactive game called “Is it a Pun?”

Wordsmiths from across the country flock to Austin every May to celebrate the wide world of puns, matching wits in a contest of humor and skill to use words and phrases in ways that suggest multiple meanings. The daylong contest (May 13, 2017) draws several hundred spectators, who gather on the lawn at Brush Square Park in downtown Austin.

The Pun-Off consists of two contests: “Punniest of Show” and “Punslingers.” The former is a prepared monologue, song, or conversation lasting 90 seconds to two minutes, typically focusing on a certain topic. A panel of judges scores the contestants.

The 2016 Punniest of Show winner, Jerzy Gwiazdowski, recited every country in Asia—all 50 of them—averaging a pun every two seconds. Just a small snippet: “I don’t wanna Russia, I Kuwait. Now I know I don’t deserve Tur-keep you. I was a Nepaling boyfriend. Oman!”

The Punslingers contest, meanwhile, is a tournament-style battle. Two competitors at a time are given a subject and take turns making puns on the subject. The topics cover anything from the Civil War—“You’re doing a great job Lincoln these words together”—to seniors and aging—“I’m not sure I cane do this.”

If a participant can’t come up with anything, repeats a pun, or uses other wordplay besides a pun (a metaphor or a cliché, for instance), that punster receives a strike. Like baseball, three strikes and you’re out.

The punster who outlasts his opponents over five rounds is named Punslingers champion. In true-to-form spirit, the championship trophies for the Punslingers and Punniest of Show contests depict the backside of a horse.

Southpaw Jones, a punster from Austin, finished as runner-up twice in the Punniest of Show competition. He covets the trophy.

“Language separates us from the animals,” Jones said. “There’s something subversive about puns. We’re making people laugh at words with double meaning or that are confusing. That’s why you’ll hear quite a few groans, too.”

The contest’s namesake, author William Sydney Porter, lived for about two years in the 1880s in the small Queen Anne-style home that now houses the O. Henry Museum on Brush Square and serves as a backdrop for the Pun-Off. Writing under the pen name O. Henry, Porter wasn’t specifically known for his puns, but he wrote more than 300 short stories and is perhaps the most famous author to have called Austin home.

The Brush Square Museums Foundation raises funds during the Pun-Off through book, food, and drink sales for the maintenance of the O. Henry Museum and the Susanna Dickinson Museum, which is housed in the former home of Alamo battle survivor Susanna Dickinson. Dickinson lived in the 1869 house with her fifth husband, and the museum opened at Brush Square in 2010.

Punsters say the camaraderie among contestants and interaction with the crowd make the event more vibrant.

“Punning is a very social activity,” said Steve Brooks, an Austin singer-songwriter and six-time Pun-Off champion. “A punster without listeners to annoy is like a tree falling in the forest with no one there to listen.”

Ben Ziek, a Los Angeles resident who has won the Punslingers trophy five times and Punniest of Show twice, said he draws inspiration from the audience. “If I’m stumped in Punslingers, I’ll take a look at the crowd and see what can trigger something for me.”

Pun ideas can come in the strangest forms. Michael Kohl, a musician from Los Angeles, thought of the pun “chard wasteland” while watching the Pun-Off a year earlier. Onstage, he appeared as Don-algae Turnip, running on a presidential campaign of vegetables.

The monologue earned Kohl his first perfect score. (He placed third after a tiebreaker.) “This is one of the only events to give the audience a chance to be weird with you,” he reflected. “I’m in good company here.”

While many familiar faces grace the stage from year to year, newcomers add a fresh spark. The 2016 Most Valuable Punster—as selected by her fellow contestants—was Janani Krishnan-Jha, who flew from San Francisco with her mother as a high school graduation present.

“The fact that this exists is amazing,” said Krishnan-Jha, who’s now a student at Harvard. “It’s great to have a place to share clever humor, instead of bawdy or dirty humor, and have it be celebrated.”

Whether you’re a participant or a fan, the Pun-Off is sure to generate fond memories. And who knows? Maybe it will encourage you to sprinkle a few more puns into your everyday life.

Gwiazdowski, a Milwaukee native who now lives in New York, said he returns to the Pun-Off annually because “in every other part of life, when you make groaner jokes, everybody wants to kick you out of the room.

“Here, they cheer and give you trophies, which is a really nice alternative,” he said.