The story of East Texas Freedom Colonies, communities created in the 1860s by clusters of newly freed black slaves, usually in the unincorporated areas of the agrarian counties where they were previously enslaved. 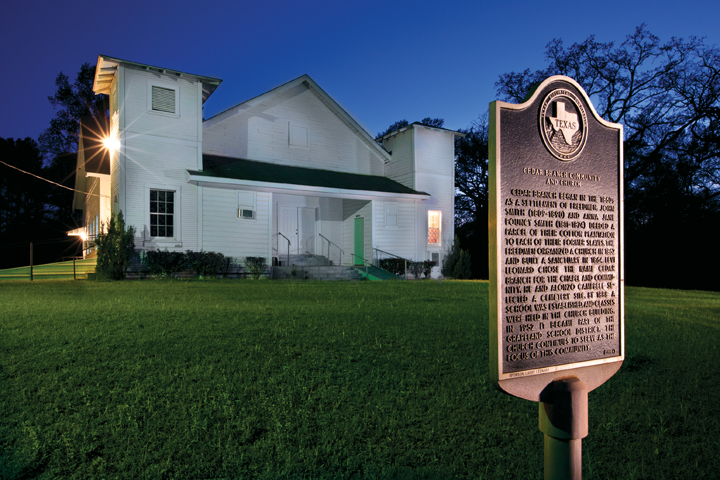 Before I met Cedric Fletcher, the man who would become my husband, I had never heard of the East Texas town of Grapeland. Our courtship led me there for the Peanut Festival every October. The sweet Pennington Farms watermelons that make the summer heat bearable brought me back. And in the decade or so of visiting, I’ve learned of hidden historical treasures in the rich, red land surrounding the town, especially the Freedom Colonies.

No one from so-called Freedom Colonies knows them by that name, which was bestowed on them by modern historians. In the book Freedom Colonies: Independent Black Texans in the Time of Jim Crow, authors James Conrad and Thad Sitton explore these communities, created in the 1860s by clusters of newly freed Black slaves, usually in the unincorporated areas of the agrarian counties where they were previously enslaved.

My mother-in-law, the late Bennie Fletcher Humphries, was born and raised in the small farming community near Grapeland called Halls Bluff. Her enthusiasm for her hometown was deeply rooted in fond memories of family, friends, and church. When asked where she was from, to most she would say “Grapeland,” but among family and friends, she spoke only of Halls Bluff and the neighboring settlements of Cedar Branch and Wheeler Springs. For residents past and present, this is an important distinction.

Freedom Colonies led me deeper into the land where I soon discovered the history of a people and the places they called home. And last year, to see the area my mother-in-law spoke of so lovingly, and the historians wrote about, I drove further into the Houston County countryside. Cedric sent his aunt, Floydia Fletcher Philips, to guide me. 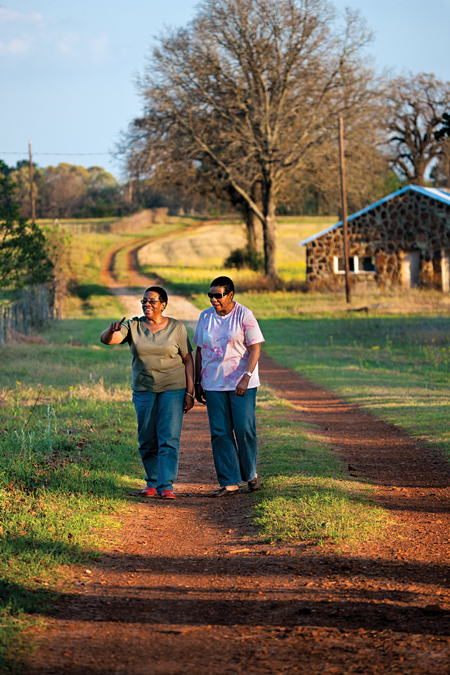 Robbie Willis (left) and Annette Parham reminisce in Wheeler Springs. Parham’s grandfather built the stone structure in the background, once a community center used for canning and mattress-making.

Traveling west from Grapeland proper on FM 227, we veer left on FM 2544 and turn south on FM 229, where fleeting glimpses of shimmering Houston County Lake peek through the hills. The asphalt road turns into dirt just beyond the sign for County Road 2080, pointing us to the Freedom Colony of Wheeler Springs.

Aunt Floydia confidently makes her way down the bumpy, red-clay dirt road, billows of fine dust settling around us. The view is amazing in the way that makes me love East Texas. Pine trees tower over us and sturdy, mature oaks mark the passage of time. The blue, cloudless sky drops down to meet the vibrant red dirt. The occasional frame house and herd of cattle become visible, but we see no other people. Aunt Floydia points left and right indicating where houses once stood when she was a girl in the 1940s. We putter along for a few miles until we arrive at a narrow road with a white, hand-painted sign that reads “Wheeler Springs Church.”

The dirt road toward the church runs parallel to a wire fence cloaked with muscadine grapevines and morning glories in full bloom. Just ahead, the church and a now-abandoned community center, both built with native stone, sprout from the lush surroundings.

Pine and oak trees dwarf the stone edifices. Several clapboard buildings housed the congregation from 1885 to 1944, and when the church needed more space, the beautiful stone structure in front of us was commissioned.

Nearby on the property lies a smaller building made from the same dark stone as the church. Here, we meet Annette Parham, who grew up in Wheeler Springs and left to attend college. After a career as a teacher outside of Dallas, she recently moved to Grapeland. Her grandfather Mose Dailey built this structure, and she remembers it as a schoolroom and a community center used for canning and mattress making.

“During the summer, we would gather here to can fruits and vegetables,” says Parham, who tells us that the commercial-style canner came about as part of a collaboration with the Texas Agricultural Extension Agency. Rural communities throughout Texas pooled their resources to buy canning equipment. In Wheeler Springs, the food was stored in the community center to feed those who needed it, and for school lunches. Systems for providing for community members from within also kept the residents beyond the reach of state and local Jim Crow laws, which enforced separation of the races. Residents handled all goods and services that could be provided within the confines of the community.

“These places were not in rebellion of Jim Crow, but they were hiding out from Jim Crow,” explains Sitton. “These were pockets of independent people who practiced avoidance and ran their own show.”

The drive to Halls Bluff winds along a dirt road cut into steep hills. It twists and turns, and Aunt Floydia expertly steers around ruts in the road. Pine trees filter the sun. The modern brick structure that is Pleasant Grove Christian Methodist Episcopal Church suddenly looms before us, high on a hill.

Historically, churches in Freedom Colonies serve both spiritual and social purposes. My husband tells me he loved spending summers with his grandmother in Grapeland, but, because of the heat, church attendance during revivals was not something he looked forward to. Incapable of conjuring an excuse to get him out of sitting in the sweltering church, which was cooled only by a window-box fan, he’d squirm for what seemed like an eternity while services took place.

This church burned down in 1995, and the current building, complete with central air-conditioning, was built the same year. The only thing to survive the fire was the church bell. Though dulled by age, the bell rests on a tall metal post that stands prominently in front of the church.

In fact, bells provided the primary mode of communication in Freedom Colonies before phones became common in the 1960s. Each bell had its own distinctive peal to announce emergencies and deaths.

In the 1860s, when John and Anna Smith gave their former slaves the land that would become the Cedar Branch community (on CR 2210, off of FM 227 or FM 2544, northwest of Wheeler Springs), they also gave them a bell for the church they helped build. The original bell sits in the tower of the church, constructed in 1924, and is still in use.

According to Sitton: “The Smiths’ gift of the bell to their former bondsmen at Cedar Branch is especially poignant. Such bells were formerly used to regulate work on slave plantations. First bell in the morning, get up; second bell, eat; third bell, be at your work station, etcetera.”

Across the street from the Cedar Branch Missionary Baptist Church, an historical plaque marks the site of the old Cedar Branch School. This school, like many others throughout the South, was built with the help of the Rosenwald Fund, a charity created by Julius Rosenwald, the millionaire CEO of Sears, Roebuck and Co. Between 1917 and 1948, Rosenwald schools were built to educate blacks and rural southerners. More than 400 Texas schools came about as part of the program, and the money came from three sources—the fund itself, local contributions, and the State Board of Education—in differing proportions at almost every place.

By the time Halls Bluff resident Willie Fobbs graduated from high school in the early 1950s, he saw how difficult and unpredictable it could be to eke out a living from the land. “The way they were struggling at that time, I knew I didn’t want to be a farmer,” Fobbs says with a laugh. “People had started to move out during World War II.” Most of the rural families who left moved to Houston, Dallas/Fort Worth, and various places in California.

After graduating from Prairie View A&M, Fobbs accepted a position as a teacher in the hometown that nurtured him. Many others had already moved on, excited about the prospects that integration offered elsewhere. Integration also signaled the end of independent schools in the communities. Those schools, including the Cedar Branch School, were incorporated into Grapeland, Crockett, or Lovelady Independent School Districts.

The population of Freedom Colonies continues to decrease. Far more alarming to Thad Sitton is that their history is in danger of being lost. “While this might be construed as African American history,” he says, “I think it is also part of the general history of rural Texas and the rural south.”

Buried deep in the countryside are the stories of people who lived out the turbulent march toward an integrated society with dignity, mostly in obscurity. The Civil Rights Movement brought the end of the self-sufficient agrarian lifestyle that carried them through, but it isn’t the end of the story. Organizations like the Houston County Historical Commission and dedicated genealogists are working to make sure that the lifestyle and the contributions of these early Texas pioneers are recorded for generations to come.

There are Freedom Colonies throughout Texas and the southern United States. A partial list can be found in the book Freedom Colonies: Independent Black Texans in the Time of Jim Crow, by Thad Sitton and James H. Conrad, with research assistance and photographs by Richard Orton (University of Texas Press, 2005; www.utexas.edu/utpress).

Cedar Branch, Wheeler Springs, and Halls Bluff Freedom Colonies are in Houston County, west of Grapeland and Crockett, off of FM 227, FM 229, and FM 2544. We recommend that you take along a county map or a copy of The Roads of Texas to help you navigate the backroads.

The 66th Annual Peanut Festival will be held in Grapeland the weekend of October 7-8, 2011. Events kick off with a parade followed by live music, crafts, and food (including peanuts) at the fairgrounds. For details, visit www.peanutfest.com.

The Texas Historical Commission offers a downloadable booklet African Americans in Texas: A Lasting Legacy (www.africanamericansintexas.com). This travel guide explores the historical and cultural contributions of African Americans to Texas since its founding days. To order printed copies, call 866/276-6219, or email [email protected].